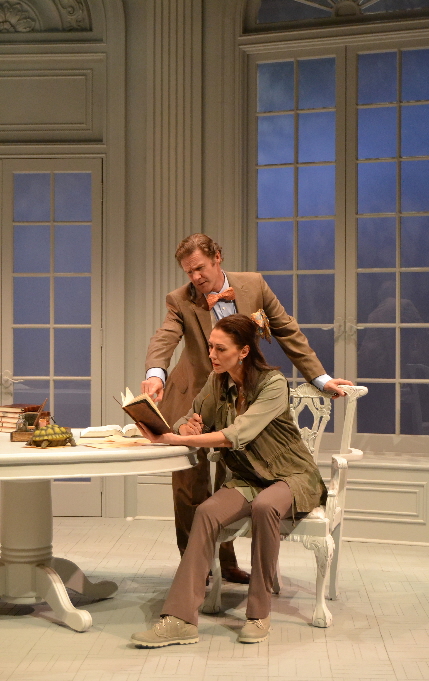 It would be easy for audiences to simply give up trying to wrap their minds around the tornadic swirling of intricate scientific ideas and complex philosophies that dominate so much of Tom Stoppard’s brilliant Arcadia.

But while Palm Beach Dramaworks’ enthralling production doesn’t give short shrift to those micro-elements, that’s not what Stoppard is driving at. What he cares about from a macro, almost Deity level and what all those elements add up to is far more comprehensible:

Arcadia is a love letter to the miracle of human intelligence’s pursuit of learning — with a gentle jab at the hubris of those who are so taken with that pursuit.

Stoppard spells it out when a literary scholar, citing other characters’ different goals, sweeps them away with passion: “It’s all trivial… Comparing what we’re looking for misses the point. It’s wanting to know that makes us matter. Otherwise, we’re going out the way we came in,”

A mathematician ecstatically speaks of how recent discoveries make it clear how little anyone really knows, “It makes me so happy. To be at the beginning again, knowing almost nothing…. It’s the best possible time to be alive, when almost everything you thought you knew is wrong.”

The 1993 drama is suffused with comedy and populated by charismatic intellectuals theorizing about art, physics, love, sex, higher mathematic, and a dozen other concepts with a density and speed that will dizzy almost anyone. Lord Byron, Newton’s laws of thermodynamics, botany, dueling theories of landscape architecture all find their way into the mix. But they are the brush strokes, not the painting. You can step back and enjoy the overall gestalt of a work of art.

Stoppard — author of The Real Thing, Rosencrantz and Guildenstern Are Dead and Shakespeare In Love — so twists his plot in on itself that is impossible to summarize succinctly except in criminally broad strokes. The play opens in 1809 in the English country house of the blueblood Coverlys where the handsome tutor Septimus (Ryan Zachary Ward) is teaching the playful, precocious and impossibly perceptive 13-year-old Thomasina (Caitlin Cohn).

Others in the full house include the haughty, pretentious and none-too-bright matriarch Lady Croom (a hilarious Margery Lowe) whose manicured grounds are being transformed into a trendy overgrown pastoral expanse complete with ruins and a hermitage. Also complicating matters are the fourth-rate poet Ezra Chater (Cliff Burgess) who is being cuckolded by Hodge.

Those scenes alternate with those set in the same space in 1993 with the Coverlys’ descendants. The no-nonsense literary researcher Hannah Jarvis (Vanessa Morosco) and her flamboyant egotistical nemesis Bernard Nightingale (Peter Simon Hilton) are scouring the family’s record books dating back 200 years for proof of their theories. Adding to the intellectual debates is Valentine Coverly (Britt Michael Gordon), a semi-slacking math grad student working out theories on his laptop.

The play reveals several mysteries then slowly solves them as the scenes alternate in time and, in the end, converge – drolly proving that the 1993 people have badly misinterpreted what actually happened in 1809.

While the play is shot through with character-driven humor and sly quippy banter worthy of Oscar Wilde, an existential darkness pervades much of the evening.

Passions of various stripes drive the play, but none more than Stoppard’s ardor, awe and adoration for knowledge, especially at the intersection of science and nature, which are not incompatible enemies in his view, but hand-in-hand soulmates such as Thomasina’s prescient intuition that math can graph every object in nature, perhaps every life.

The play is a good three hours long with one intermission (the third one this month). But the only time that it feels like Stoppard was just self-indulgently showing off his genius for about ten minutes occurs halfway through the second act. But then it picks back up as he connects every last one of the scores of seemingly disparate clues, red herrings, themes and loose ends like a master weaver who has seen the overall pattern in his head all along.

All of it relies crucially on Dramaworks’ Resident Director Lewis, one of the few local talents able to not just analyze, but clearly communicate such dense multi-faceted material. He may be a master at pacing, staging and working with actors to enhance performances through a hundred eccentric line readings and facial reactions. But his guidance in making such material comprehensible (or as comprehensible as possible when dealing with Stoppard and Albee) is unmatched in the region. Despite the encyclopedia’s worth of verbiage, Lewis ensures that the steady dialogue volleys crisply.

The cast of ringers and locals could not be bettered for their comic chops and their ability to communicate both the characters’ superior intelligence and their hapless awkwardness in personal relationships. The people on stage are the smartest people in the room.

Also note-perfect are Dan Leonard as the all-knowing butler Jellaby, James Andreassi as the befuddled landscape expert, Gary Cadwallader as the officious Capt. Brice, Arielle Fishman as the Nightingale-besotted Chloe and Casey Butler as the youngest Coverley in both centuries.

As always, Dramaworks’ creative team delivers, from Don Thomas’ subtle lighting changes to Steve Shapiro’s soundscape encompassing the chirps and barks of a country estate as well as the roar of a jet to signal the shift in time. Anne Mundell creates a beautifully elegant oval-shaped drawing room with almost everything bathed in pearl white.

The color comes from Brian O’Keefe’s incredibly vibrant costumes. It’s not hard to copy designs from a book, but O’Keefe and a team of seamstresses build character-defining garb of the flamboyant period yet studiously invested with seemingly unique stylistic fillips you think you have never seen before. And if those 19th Century designs are flashy, his eye is just as dead on clothes defining contemporary characters.

We are not even two-thirds of the way through “the South Florida theater season,” yet it is shaping up to be one of the strongest in recent memory, especially in the sense of companies daring to take on and usually prevailing over challenges ranging from reinvigorating classics like the Maltz Jupiter Theatre’s Gypsy to daunting fare like Zoetic Stage’s The Caretaker. Certainly, there have been some spectacular failures as well, but Dramaworks’ Arcadia takes its place in that seemingly impossible procession of works this season that have earned not just praise, but rave after rave.

To read a preview feature about the production including interviews with Lewis, Ward and Morosco, click here.