Dr. Ruth Bio-Play Is Charming But Not As Enchanting Or Vibrant As The Real Thing 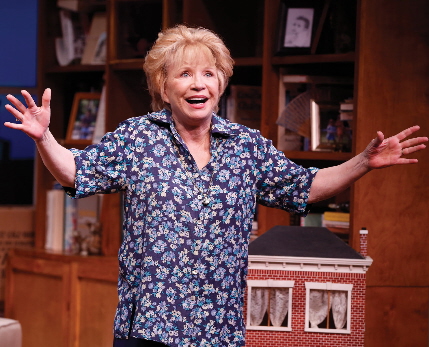 Debra Jo Rupp as the title sprite in Remembering Dr. Ruth at the Parker Playhouse / Photo by Carol Rosegg

Awash in sex, war, adversity, sex, divorce, achievement, motherhood, determination, sex, the Holocaust and sex, it’s difficult to understand how the biographical play Becoming Dr. Ruth can be mildly charming, intermittently funny, occasionally poignant but not as terribly compelling or enchanting as its heroine.

This one-woman play stars Debra Jo Rupp delivering a watered-down version of the diminutive sprite who aired solutions to bedroom problems on radio and television and thereby reduced the shame of sexual dysfunction.

The raw material of Ruth Westheimer’s life and the persona that she has projected for decades ought to produce a more vibrant and insightful evening. As it is, the 90 minutes is gentle entertainment that is diverting and filled with Biography Channel nuggets like her skill as a sharpshooter honed while serving in the paramilitary Haganah in Palestine.

The missing frisson is what she says she is during the show and what we know she is – a highly intelligent, deeply compassionate therapist and a resilient survivor who sees living fully as the best revenge against such tragedies as losing her entire family to Hitler’s final solution.

A major problem is the script by Mark St. Germain who has made a cottage industry out of biographical plays, some successful like Freud’s Last Session, some less so like Camping with Henry (Ford) and Tom (Edison). His newest, Scott (as in Fitzgerald) and Hem (as in Hemingway) In the Garden of Allah will be seen later this month at Actors Playhouse in Coral Gables.

But nearly every time Westheimer strays toward a genuine emotion, often connected to the loss of her family in the Holocaust, St. Germain destroys the moment by having her make a joke or turn to a theatrical non sequitur. She says she unconsciously looked for her dead family in the crowd at her marriage ceremony. The audience feels a tiny tug at their heart. Then Westheimer immediately pulls down from a bookshelf her “Dr. Ruth’s Good Sex Board Game” to gleefully show to the audience. It’s as if St. Germain is afraid to let us see her emotionally stumble. This paradigm occurs often enough that it must be intentional. Westheimer is a famously upbeat and positive personality, and perhaps in real life she employs exactly this coping mechanism. But dramaturgically, it’s not effective theater.

Another inescapable problem is that of comparison — portraying someone who is not only still vibrant in the audience’s memory but who, on opening night, was sitting in the auditorium. A similar challenge dogs the current New York shows about Lyndon Johnson, All The Way, and to a far lesser degree, the superior one-man show about Louis Armstrong, Satchmo at the Waldorf. Rupp has some of Westheimer’s distinctive German-Israeli-French-American accent (actually, Rupp sounds like a Germanic Elmer Fudd without the stutter) plus some of the mannerisms, but she isn’t likely to win the Frank Gorshin Memorial Award.

Rupp, best known as a regular on television’s That 70s Show, has considerable theater credits and she’s certainly a talented actress. She just was nominated for the Outer Critic’s Circle and Drama Desk Awards for an off-Broadway run of this show from last fall. But this role seems just a few inches out of her reach.

The play opens in 1997, shortly after the death of Westheimer’s last husband, as she is packing up her Washington Heights apartment. She greets the audience as visitors, as if to naturalistically justify her coming monologue. But then she acknowledges this is a play by asking the crew for the lights to get brighter and by having family photos blown up on a picture window that magically turns into a projection screen.

In between rolling up knickknacks with bubble wrap, she tells of her childhood in Frankfurt as Karola Ruth Siegel as the Nazis rise to power, how her father was sent to a work camp after Kristallnacht , how she was placed with hundreds of children on the Kindertransport to unwelcoming homes in Switzerland, how the last letter from her family came in 1941.

All of this is threaded through with gentle humor, such as revealing that she learned a good deal of English upon arriving in America by reading “True Confessions” magazine. But surprisingly, very little of this is especially touching or hilarious or revealing.

The play and Rupp’s performance only ignite when Westheimer finds her niche in sex therapy and she details how she took her mission to the airwaves in late middle age. Until the last 15 minutes or so of the show, references to her refreshingly liberating and bemused views on sex are barely sprinkled across the evening. But when they come, they are indeed the best part of the show as this tiny grandmother issues advice about sexual matters as if she was suggesting the best way to improve a cake recipe. For instance, she advises in a deadpan manner that belies that she impishly knows what exactly she is saying, “I have helped many men with their penises.” She says she draws the line giving advice on two topics: S&M (“because I have to visualize it”) and bestiality (“because I am not a veterinarian.”)

But generally, neither our hostess nor St. Germain make much of an attempt to specify how her past provided the building blocks that would produce “Dr. Ruth.”

Perhaps another problem is that this intimate little show played in the modest Westside Theatre in New York City and here is lost in the cavernous Parker Playhouse.

Incidentally, the opening night audience was treated to a post-show discussion of the play with Rupp, director Julianne Boyd and Dr. Ruth herself, who reportedly may address fans after other performances.