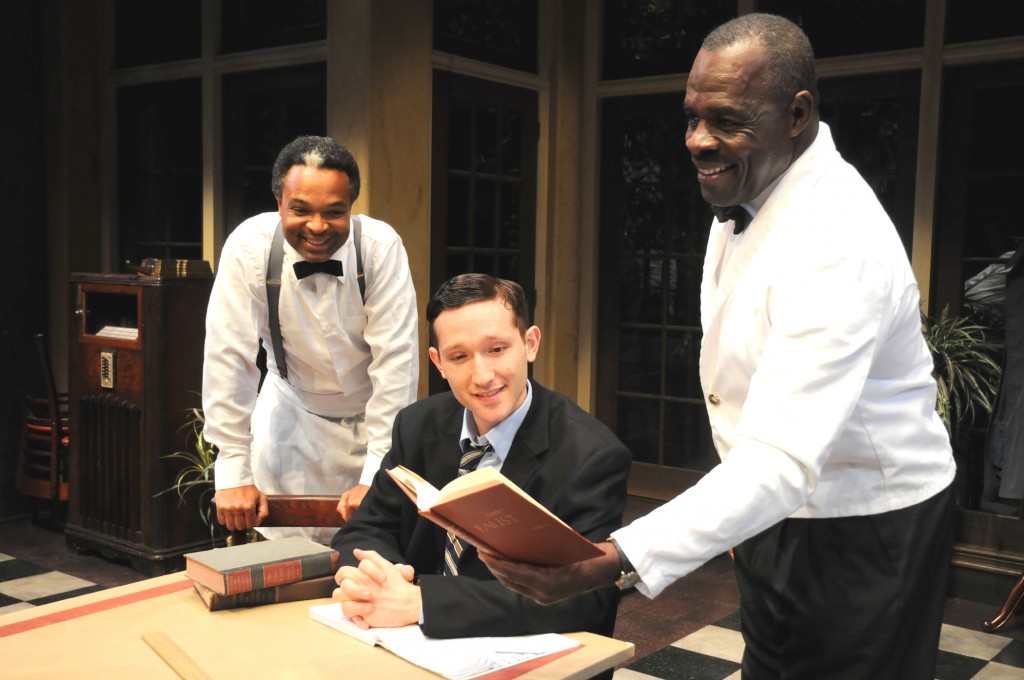 The obscenity that was racism in South Africa in the mid 20th Century depicted in Master Harold…and the boys may be less virulent today, but Athol Fugard’s 1982 play remains a gut punch of theater because the poison so clearly persists around us all with a dispiriting universality.

Palm Beach Dramaworks’ production starts sluggishly, absent the whiff of apartheid needed to fuel dramatic tension. But once the plot takes its crucial left turn, the drama under William Hayes’ direction surges powerfully toward an inexorably stunning and heartbreaking conclusion.

Hayes, his cast and Fugard have invested this broad social tragedy with very specific human dimensions. The cost of racism is not some abstract ill here but a cancer that cripples friendships and, worse, the self-respect of characters we know intimately by the end of the play.

The story opens on a rainy afternoon in 1950 in the St. Georges Park Tea Room in Port Elizabeth where middle-aged black waiters Sam (W. Paul Bodie) and Willie (Summer Hill Seven) are bantering at length about a ballroom dancing competition. Their bosses’ son, 17-year-old Hally (Jared McGuire), arrives to do homework while awaiting word whether his mother will bring his alcoholic father home from the hospital to be nursed by the boy.

Despite the oppressive time, place and racial mores, the three are lifelong companions, the older men serving almost as surrogate parents. Sam in particular, listening to Hally’s school lessons second hand, has become the boy’s intellectual sparring partner, gently questioning the teenager’s adolescently definitive pronouncements on everything from art to philosophy.

Hally and Sam speak of a dream of a social reformer to change the world, although the injustices are petty and intangible for Hally while Sam knows full well what needs reforming. On the pretext of Hally writing a school essay, the two brainstorm an extended analogy of a ballroom dancing competition as a metaphor for a dream of harmonious global (and racial) politics, “a world without collisions.”

The actors deftly deliver some of Fugard’s most elegant yet accessible writing in this scene of mutual yearning for something finer in human interaction.

Sam says: “There’s no collisions out there, Hally. Nobody trips or stumbles or bumps into anybody else. That’s what that moment is all about. To be one of those finalists on that dance floor is like… like being in a dream about a world in which accidents don’t happen.… And it’s beautiful because that is what we want life to be like. But instead… we’re bumping into each other all the time,… None of us knows the steps and there’s no music playing.”

But when Hally learns his drunken father is returning home, he abusively rails at Sam and Willie in his father’s place. When Sam pushes back, Hally’s latent inbred racism emerges, leading to a painful collision that exposes how no lasting relationship can be built on an inequitable foundation.

Master Harold was Fugard’s breakout play in the United States and while he allowed his scene-setting opening to go on and on, his humor and pathos are skillfully underscored by Hayes and the cast.

The production only has two shortcomings. The minor one is that while the accents are admirably authentic sounding to a North American’s ear, some of the verbiage gets lost in the enunciation.

More crucial is what’s missing in the early scenes. Two facets must be clear without it ever being said: Hally has a deep affection for Sam and Willie that goes beyond companionship. Second, Hally must exude being so deeply infected with the false entitlement of white superiority that he doesn’t even know he harbors it. Without the clear specter of apartheid outside the doors imbuing everything and posing a constant danger, Hally’s reversion to racism cannot be so crushing to Sam and Willie. It is not that the men are unaware of the world outside or simply disappointed in their friend’s moral failing, but that they hoped against hope that their relationship might be a sign of a new South Africa. McGuire doesn’t that bring any of that in the door with him.

But McGuire redeems himself in his anguished conversations on the phone with his mother and father. McGuire wrenches the audience’s compassion portraying the vise closing in on Hally as his mother tells him that his father is coming home, a move that will make his life miserable. And then you hear him nobly shielding his father by assuring that he is looking forward to seeing him, even though Hally believes this will renew marital strife and require Hally to be a nursemaid/mediator.

McGuire , who’s nowhere near 17, is less convincing as a teenager on the cusp of becoming an adult. That hurts a bit because one of the strengths of the play is to hear the adolescent giving orders and even hitting men who are old enough to be his father because he is so thoroughly contaminated with unexamined prejudice. The audience should feel slapped in the face when an upset Hally says things like, “I’ve been far too lenient. I allow you chaps a little bit of freedom in here when business is bad.”

It is Bodie’s performance under Hayes direction and speaking Fugard’s words that gives the production its strong emotional core. The three ease us into the deepening realization that this seemingly happy-go-lucky man is not just innately intelligent but possesses an incisive understanding of and compassion for human frailty. It is Bodie’s sadness at Hally’s succumbing to such frailty that provides the last scenes with its emotional wallop.

Seven has the thankless role of the ebullient simple soul Willie, but Seven is always present in the moment, always listening (which Willie has to do a lot) to his two friends carrying on about subjects he cannot follow. Seven gives Willie warm eyes, a generous smile and good heart without slipping into caricature.

It’s almost becoming standard to say it, but the visual and aural world created by Dramaworks’ team is a marvel. Ron Burns’ subtle lighting, Rich Szczublewski’s soundscape and Michael Amico’s uncannily photo-realistic recreation of the tea room on a dreary day with rain drizzling in the foliage outside. His attention to detail is stunning down to what looks like a vintage wooden jukebox and time-scarred walls.

Dramaworks has richly earned its reputation as one of the finest purveyors of theater in the state, and expectations are raised with each production. Master Harold…and the boys remains a thought-provoking and passionate production of substance.