Dramawork’s Mice And Men Is Muted But Moving Revival 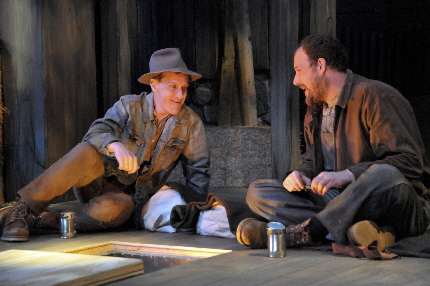 Human beings have to dream – no matter their likelihood, no matter the cost. This sampler cliché find its truth in the tactile tragedy that is Palm Beach Dramaworks’ muted but moving revival of John Steinbeck’s Of Mice And Men.

Equally fraught with gain and loss is the need for human connection as depicted by the bonds that form and disintegrate during a few days among itinerant farmworkers scratching out a living during the Depression.

The magic of this script, the actors’ performances and the skill of director J. Barry Lewis communicate a yearning so intense that you can almost see the characters’ hearts struggling to burst from their chests. And because the vagaries of life have treated these ordinary people so harshly, they do it while knowing better. Their hope makes them all the more noble and tragic.

When chance makes it possible for one dream to seem achievable for the first time, the farmworker George begins spinning out his vision aloud. He starts to stand but his knees buckle under the weight of possibility and when he does walk, he stumbles about in disbelief.

Like Lewis’ work with last season’s closer, Dancing At Lughnasa, this is a sad elegy that requires audiences to alter their metabolism when they arrive. It’s a quiet, slow-moving but steady river that rewards the audience’s investment of patience and attention. Some people with perfectly admirable taste will want something with a little more fire, a little more electricity.

For those of you who cut class during American Lit in high school, Of Mice and Men is Steinbeck’s 1937 novella based in part on his own wandering the farm of northern California.

It tells of two men travelling from ranch to farm doing manual labor of any kind. George is a compact slender man of better than average intelligence who is all too aware of uncaring fate. Lennie is an incredibly strong giant, slow-witted from birth and with a nature far too gentle for his own good.  George has been protecting Lennie for most of their lives although they are not relatives and the relationship has cost George a normal life.

They are yoked together in a mutually beneficial, yet altruistic bond that would be grossly glib to refer to as a bromance. But when you care about something in this world, it gives you something to lose and Steinbeck telegraphs from the start that this will have an ending as affecting as Brian’s Song.

They are on the run from their last job in which Lennie, who has a child’s obsession with stroking soft things, has been unjustly accused of raping a woman in the last town. When they find their next job, the farm is populated with burly hands like the genial muleskinner Slim; Candy, the elderly cripple kept on out of charity; Curley, a bantam bully of a foreman, and his restless wife.

Each cradles their modest dreams out of sight for fear that they might be mocked or that the very utterance aloud might expose it to the infectious dangers of the world. George and Lennie nurture a detailed reverie of a small farm of their own. It really is a dream of self-determination, of having the freedom to reap what you sow literally and figuratively, of a way to reinforce your self-esteem. Curley’s wife dreams of a truer love than that of her insecure husband and even the adoration that comes from being a movie star.

But human interaction for these universally lonely people can lead to both heartening and fatal results. The final scene – no spoilers here but most of you know what it is and if you didn’t, Steinbeck has been setting you up for it for two hours as inevitable – is delicately and sensitively staged by Lewis.

Steinbeck wrote the script himself with the dramaturgical aid of director George Kaufman who was a legendary play doctor. But the vision and the language are pure Steinbeck. With farmhands as anonymous narrators ala Nicholas Nickleby, the scene is set with imagistic poetic descriptions of the land, the environment and nature.

But Steinbeck demonstrates a fine ear for the more vernacular poetry of his characters’ speech — the slang, the cadences, the idiomatic turns of phrase like “She’s got the eye” meaning Curley’s wife glances invitingly at the other farmhands.

The script is filled with verbal and situational metaphors that foreshadow the tragedy. But they just seem like an artist’s tool, no more unnatural than if they were employed in a narrative poem.

The list of Lewis’ virtues just ought to be put on a computer macro to save time. His physical staging is seamless, consistent, silently evocative and absolutely invisible. His ability to elicit naturalistic and convincing performances is excelled only by his skill at helping the cast find the intent of every beat in the script. Throughout there is a consistent and discernible tone. Again, it is a low-key tone that makes the audience long for a little more vibrance on the stage but it’s perfectly valid.

Most of the cast inhabit recognizable people on stage even though their characters have become so iconic over the decades that the actors have to fight (but prevail) to keep them from becoming symbols and clichés. The quaint phraseology of the dialogue and the crystal clear metaphors might sound affected and heavy-handed in other voices. But this cast smoothly delivers even those almost bold-faced omens with sincerity and credibility.

John Leonard Thompson’s portrayal of George underscores his outstanding ability to draw a fully-realized human being without standing out while doing it. For regular Dramaworks’ patrons, it will add to his reputation for versatility that encompasses the genially diffident minister in Candida, the addled brother in Lughnasa and the volcanic Teach in American Buffalo. His sharp-edged features echo George’s wariness of having been ground down by life, but he remains tough as rawhide and still harbors enough humanity to stick with Lennie.

Brendan Titley makes his Lennie as open-hearted as his round face, yet his simplicity seems organic, not an acting choice. He prevails over the tough challenge of making him lovable but not cloying. He doesn’t quite put across the sense that Lennie is capable of running amok and inflicting serious injury without meaning to. But he has the child-like wonder down cold – especially in his scene when he meets Candy’s dog by making playful faces with a new friend.

The sole quibble is that there is not a lot of chemistry between the two. Their connection is evident simply because they have stuck together rather than any visible if tamped down affection.

Dennis Creaghan, the well-coiffed patrician of A Delicate Balance, makes an affecting grizzled coot in Candy who has lost a hand and is reduced to mucking out. He embodies someone trying desperately not to be discarded in a world that shoots wounded animals no longer able to fulfill their duties. Watching the light return to his eyes as he joins in the prospect of George and Lennie’s dream is a joy.

But most of the cast is that good: Cliff Burgess as the kindly Slim, Betsy Graver as the lonely restless wife, W. Paul Bodie as the crippled black stablehand, Wayne Steadman as the pragmatic colleague, Frank Converse (who appeared in Dramaworks’ The Weir in 2009) as the boss, and Ricky Waugh who caresses Steinbeck’s descriptive narration one moment and then credibly switches to a farmhand’s twang. Christopher Halladay is all blustering glower as Curly, but in perhaps the sole misstep, Lewis and Steinbeck just has him blow in looking for his wife and a fight, and then blow out. He doesn’t have much time to establish a realistic character.

Production values are a hallmark of Dramaworks’ offerings, but costume designer Leslye Menshouse has outdone herself with wardrobes that communicate individual characters as well as the environment. The denim overalls, corduroy pants, fedoras, Stetsons, vests and workshoes all solidly establish a world in which sweat and grime has been ground into the molecular structure of the clothes. She adds little grace notes like a red bandanna hanging out of a back pocket or Curley’s wife’s silly gaudy shoes – totally out of place heels that she probably saw in a movie star magazine, adorned with lace and a fake red flower.

Michael Amico’s set design and Sage Neighbors’ painting superbly convey the tone of the piece — a textured world of labor seen through weathered timbers and corrugated sheet metal that highlight the wear of unforgiving elements. As always, Amico finds precisely the right period props to decorate the rooms. Matt Corey’s sound design encompasses his original music of a gently strummed acoustic guitar to subtly feathering in the sounds of nature emanating from different parts of the auditorium. John Hall’s lighting atmospheric lighting includes leaf-dappled chiaroscuro and golden sunsets pouring through the slats of the stable.

A side note: Lewis enhanced the script with those descriptive narrations that cover scene changes, lyrical passages drawn directly from the text of the novella. It unquestionably eases the audience both into physical environment as well as sets the contemplative tone.