Showbiz Lampoon Ruthless Is A Bit Long, But Wickedly Funny 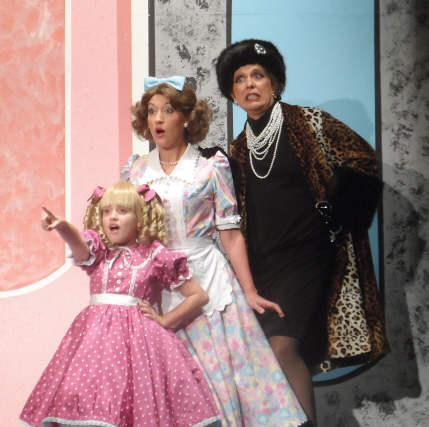 Everything about Ruthless! The Musical from dripping furs to the Ethel Merman voices, everything is over the top. Way over the top. Thank goodness. Well, actually, don’t thank goodness. As Mae West advised, “Goodness has nothing to do with it.” Ruthless is a gleefully uninhibited celebration of greed, venality, ambition and ego. In other words, show business.

The folks at Actors Playhouse wallow in the opportunity to pull out all the stops in this wicked Joel Paley/Melvin Laird lampoon about excess.  Produced first in 1992, this meld of The Bad Seed and All About Eve presciently predicted what was then thought as outrageous satire and now has come to pass in the horrifying specter of Honey Boo Boo.

Ruthless tells of the preternaturally talented 8-year-old Tina Denmark with a biological need to become a stage star. The angelic-looking third-grader is sufficiently equipped with the skills plus a steely will more deadly than a bear trap. She lives with her June Cleaver-like mother, the chirpy and empty-headed hausfrau Judy. When Tina fails to get the lead in the school play, Pippi in Tahiti (as in Pippi Longstocking), Tina’s sucrose exterior slips away to expose a maniacal murderess under the tutelage of the mysterious talent agent Sylvia St. Croix.

Plot twists, intentionally transparent secrets, witty nods to shows like Gypsy and the infectious belt-a-thon of a score give director David Arisco, his cast and designers the proverbial field day. Arisco has characters perpetually dueling to steal the spotlight from each other, upstaging with a slight step in front of someone, arms outstretched. That goes for everyone from the star’s scheming assistant Eve to Tina’s has-been actress turned teacher Miss Thorne.

The media attention prior to opening night has focused on Julia Dale, the 12-year-old Broward girl who brings beauty pageant charisma and Cat 5 vocal power to Tina. When she makes her big tap dance entrance and sings “I was born to entertain,” the audience is bought and paid for. It’s like when Andrea McArdle came center stage with a mangy cur and sang about the sun coming out tomorrow.

Dale’s claim to fame is singing “The Star Spangled Banner” at Heat games and her stage experience has been limited to kids’ productions like Cats Jr., Annie Jr. and Madeleine’s Christmas. So her ability to act convincingly in a professional production without seeming out of place is impressive. She clearly understands the wry humor when Judy says to her, “I want you to have a normal childhood” and Dale answers blithely, “I’ve had a normal childhood. I want to move on.” It will be a pleasure to watch those acting chops deepen over the next few years.

But the linchpin is someone else. It’s embarrassing to once again express surprise at rediscovering the talent and skill of Amy Miller Brennan. As Tina’s cookie-baking, pearl-bedecked shrinking violet of a mother and (major spoiler alert) as the transmogrified Broadway star with an unbridled ego and arrogance, Brennan is jaw-droppingly excellent from her buttermilk and bourbon voice to her deft handling of broad comedy. As the housewife, Miller affects a breathy Jackie Kennedy timbre and a Broadway brass as the diva. When Judy’s mind begins to fray, Brennan gets this Norma Desmond look in her eyes that is priceless. When she blasts out the second act “It Can Never Be That Way Again,” she scorches the paint off the walls.

Gabriel Zenone is clearly having a hoot playing the pragmatic Sylvia, a part traditionally played by a man in drag. Commendably, other than once dropping into his natural baritone for one verse, Zenone and Arisco never even wink at the fact that the character is being played as a man – which makes it all the funnier. With a plummy showbiz voice, Zenone creates a cross between a wounded Joan Crawford from Mildred Pierce to a Gorgon of a stage mother who could take down Mama Rose.

Leigh Bennett steals every scene she’s in with her deliciously vicious portrayal of a theater critic who loathes the art form but loves pouring toxic venom all over a production. Intentionally and perfectly channeling Ethel Merman, Bennett belts out one of the funniest songs in the show, which ends with the trumpeting declaration “I hate musicals” sung with that Merman bray, and then adds,  “but not as much as I hate this song.”

The cast includes the wonderful Sally Bondi doubling as Tina’s third-grade teacher whose bid for the stardom was crushed, and as a snoopy entertainment reporter. Jeni Hacker also doubles as Tina’s untalented and doomed competition for Pippi, as well as the insanely ambitious assistant Eve. Hacker also helped Arisco with musical staging and the choreography created by Nikki Allred.

As usual, musical director Eric Alsford not only coaches the singers, but leads a fine pit band including David Nagy, Martha Spangler and Julie Jacobs.

As thoroughly entertaining as Ruthless is, there are flaws. Both acts as written have always gone on just a little too long, especially since Tina is offstage for most of the second half. Also, for all the unflagging energy the cast delivers, this edition drags its heels a bit. But that may have been due to Saturday night’s unresponsive audience. It also may be in part because at least one actor wasn’t picking up cues crisply. That may change when performances resume next week.

It also operates at a decibel level they can hear in Hialeah — not just the sound system (which once again has improved markedly over the last season or two), but the unrelieved fever pitch of characters fairly screaming at each other every few minutes.

Finally, this is a modest chamber musical meant to poke fun at over-produced mega-productions. So this relatively well-heeled undertaking on the main stage undercuts the sense of a scruffy mutt nipping at the heels of the establishment like Forbidden Broadway.

That said, Ellis Tillman’s costume design is absolutely fabulous, maybe marking a personal best. With a show set amorphously around the 1950s or 1960s, he has let himself go wild: gold lame, turbans, leopard skin wraps, pink party dresses, Hedda Hopper hats with feathers sprouting at weird angles, purple sequined pants, a closet full of furs and stoles accented with ostentatious jewelry and strings of pearls.  Each outfit is an extension of character, but all of them formed as wicked a satire as anything else in the show.

Tim Bennett’s set design is just as delightful and equally satirical. The Denmark home is Barbie’s Dream House in Pepto pink and eggshell blue, down to the Princess telephone. The second act Manhattan penthouse has that garish thing that passed for sophisticated taste in some people’s minds.

It’s been 18 years since the terrific  production at the Colony Theater starring Margot Moreland and Hugh Murphy, and 11 years since the award-winning version at Hollywood Playhouse with Stacy Schwartz and Wayne LeGette. So it’s a pleasure that Arisco and company have brought it back with a sextet of actors willing to hold their arms aloft at the slightest provocation like Evita asking the crowds not to cry for her.