Emotions, Not S & M Is The Real Attraction in Zoetic’s Trust 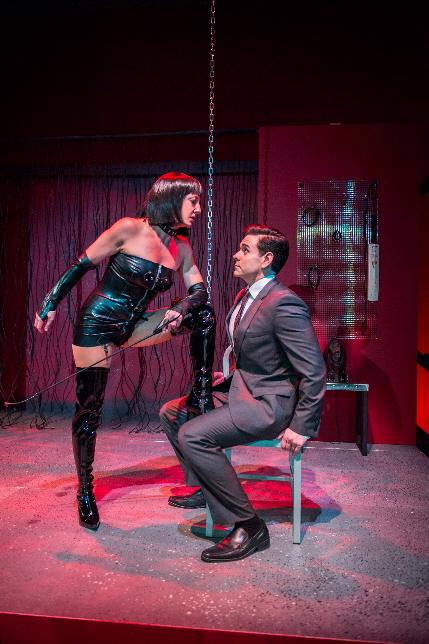 Even though chains hang from the rafters before Trust opens and the buzz will fixate on the S&M, sex is only the milieu for a rollicking yet incisive study of how people’s need for dominance in a relationship is tied to their desperation to reaffirm their illusory self-worth.

In actuality, the occasional whips and handcuffs are tertiary in Paul Weitz’s script, meant to be more humorous than sensual, more of a metaphor for the emotional pain and psychological bondage that the protagonists are wrestling with.

Melding hilarity and a scalpel-sharp exploration of people struggling to discover and accept who they really are is the triumph in Zoetic Stage’s superbly acted and directed production.

The collision of two urban couples exposes the fault lines in their relationships, rooted in the crippling baggage of their pasts and their inability so far to face and cope with them.

Each encounter twists the plot and characters inside out over and over. Their search for control through dominance in their relationships – far more brutal than the use of nipple clamps — is as much a search for control in their inner lives. None end up where they started as their interaction reveal their real selves to themselves and to us. By the finale, everyone has had reached a tentative detente with themselves if not an outright happy ending – a harrowing journey punctuated with copious laughter for the audience.

The troupe’s work here is so outstanding that they deserve a quick nod high up: actors Nicholas Richberg, Niki Fridh, Gretchen Porro and Alex Alvarez, and especially director Stuart Meltzer. All five courageously dive into this material and invest what you see on stage with sharp analytical skills, deadly comic timing, endlessly inventive touches and profound emotional truth.

Recounting the plot is problematic because the twists and secrets provide the meat of the narrative. But revealing the very first inciting one is crucial, so forgive this one spoiler.

Harry founded a dot.com that he sold for $300 million just before the economy went bust. He now runs a charitable foundation for the lack of anything better to do, but his ability to throw money around heedlessly has left him unfulfilled. He says he was simply in the right place at the right time and made the most of his limited talent and opportunities.

He is married to Aleeza, a woman born into wealth who has pursued a career in painting, but who has slowly become emotionally too numb to pursue her creative life. Underneath, she is in such angst that she says, “I want to scream.” Their marriage has been disintegrating, exemplified in part because she simply doesn’t want to have sex with Harry – – which may have led him to Prudence.

Prudence is an underachiever who sees nothing sensual about her business. It just allows her to indulge in psychological manipulation as well as gives her a venue in which she finds the control that she has lacked in her past family life and her present relationship with boyfriend Morton (Alvarez).

Morton is a very intelligent, well-educated slacker unable to make anything of his gifts. He may love Prudence (“I love you more than my vocabulary”), but he is also a physically abusive bully with violent/adoring behavior that leads Prudence to label him a sociopath,

But Weitz makes us question who is really the sadist and who the masochist, who are the ones addicted to being dominant and those who are the true submissives. The ensuing plot and the character development arcs are a morphing swirl, but they are relatively easy to follow even as they corkscrew into each other.

This is playwright Weitz’s sixth play at least, but you’ve likely heard of none of them; he’s better known as the screenwriter of Antz and About A Boy. But he creates sharp, arch and angsty character-driven theater that echoes the stage and film work of Jules Feiffer, Woody Allen and Mike Nichols.

His crisp witty repartee has a wicked undercurrent. Meeting Aleeza for the first time in her home, Prudence defends herself, “It’s not about sex. I’m performing a service.” Aleeza inquires with just a hint of sarcasm wrapped in seeming naiveté, “Like an accountant?”

Earlier, Prudence suggests Harry needs a safe word before they start a session. Harry logically suggests, “How about ‘stop’?” skewering the silliness of the fantasy set up.

But other lines cut through the characters’ self-deception. Aleeza, who is currently just a satellite in Harry’s orbit, says, “I don’t think I’d like to be dominated,” to which the worldly-wise Prudence says firmly, “Everyone wants to be dominated.”

The work seems to run a shade long, but not because of plot, acting or direction. In fact, although it seems to reach its finale two or three times, each succeeding scene is necessary to tie up every loose end and issue. Virtually the only thing unclear at the end is precisely what the title means, although there is a fleeting reference to it in one of the last scenes.

Having seen much of Meltzer’s work since he co-founded Zoetic four years ago, it’s still hard to explain exactly how he accomplishes what he accomplishes. But there is a uniformity to the fine-grained detail of his work. He elicits deeply-felt, naturalistic performances even in raucous comedy. The productions are always festooned with almost subliminal bits of business feathered into the painting, as simple as having a character sit down closer to someone on a sofa than is normal or natural.

And when he has cast like this one…. We could use twice this space to talk about the carefully calibrated performances, the ability to convincingly play such conflicting traits and frankly sharp right turns in personalities, the total commitment to outlandish characters who would otherwise seem like cartoons.

Every aspect of the technical team under Meltzer’s melding guidance is top-notch. Elayne Bryant’s fluid set design evokes the characters’ personalities as do the clothes carefully chosen by Kerry Shiller (who unfortunately is leaving for Denver this spring). Particularly notable is Marcelo Ferreira’s lighting which encompasses the hilariously red-bathed S&M dungeon to a sun-dappled villa on a beach. Even better, he provides each set change with a different style of lightshow along with Meltzer’s choice of sex-drenched pop music to occupy the attention of the audience.

In the Be Glad I Don’t Bring a Taser to Theater Dept.: It’s only in the Carnival Studio Theater that we see this particular brand of self-centered thoughtless behavior from the audience. But at nearly every show several boors get up in the middle of a show and clomp noisily down the stadium seating to either (a) go get their fourth or fifth drink of the night from the lobby bar, and/or (b) to relieve themselves of their fourth or fifth drink. Fortunately, the attentive ushers will not let them back in until a scene change – when they often walk in front of the stage drink in hand. This has happened since Zoetic’s first show, South Beach Babylon. Anyone who has ever been in that venue cannot fail to notice that there is no way to go up those risers with their hollow understructure without clattering like a cattle drive.

Here’s a clue to the clueless: Not only are you disturbing other audience members (we won’t say fellow audience members because we aren’t claiming you jerks) but the actors can see and hear you. So do us all a favor and unless you have a prostate problem, visit the little boy’s room before the show starts or afterward. Or perhaps don’t get drunk before you arrive.

Trust from Zoetic Stage as part of the Theater Up Close series performs through March 29 in the Carnival Studio Theater at the Arsht Center’s Ziff Ballet Opera House, 1300 Biscayne Boulevard, Miami. Performances are at 7:30 p.m. Wednesday-Saturday, 4 p.m. Sunday. Tickets are $45. Running time is 1 hour and 40 minutes with no intermission. (305) 949-6722 or www.arshtcenter.org.

2 Responses to Emotions, Not S & M Is The Real Attraction in Zoetic’s Trust