Florida Grand Opera’s Lucia di Lammermoor Is To Die For 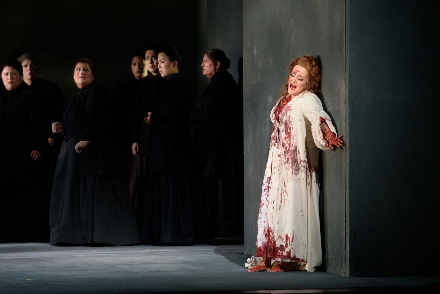 Florida Grand Opera promised a season of Divas to Die For, and it couldn’t have been more on point in that respect with its 77th season opener, Lucia di Lammermoor.

Gaetano Donizetti’s bel canto masterpiece may not be as familiar to operagoers as some of the classics, but it’s a crowd pleaser with its 15-minute tour de force which plunges Lucia into hysteria, drama around every corner, and a Romantic score of beautiful melodies.

Donizetti’s romantic tragedy premiered in 1835, which set Sir Walter Scott’s story, Bride of Lammermoor. Lucia is stuck in the middle of two men, really. She’s flanked on one side by brother, Enrico, who will use his sister to gain political footing by marrying her off to someone of the right stature – a royal cad named Arturo. Then there is the passionate Edgardo, who Lucia believes is her true love Yet he’s the arch-enemy of Lucia’s family, and definitely not whom Enrico believes in any way, shape, or form, should be marrying his sister, let alone leaving the door open to become a brother in law.

Lucia, the role, is, for sure a role to die for — one of those that in the hands, or in this case, voice, of the right talent they could quite literally sink their teeth into it. Maria Callas did it, and so did Joan Sutherland, as did Beverly Sills. It’s because this opera requires that the performer not only be able to sing the difficult part (Donizetti has built in some tricky trills and vocal acrobatics for his leading lady), but has to ensure that the build into the second act Mad Scene does just that – build from a bit of “the crazys” to full blown insanity without seeming forced or like something out of a B-level horror movie.

FGO has found a coloratura soprano Anna Christy to play the fragile Lucia. Yet this Lucia is multi-faceted — fiery, childish, unpredictable, and played with such emotion that by the time her character erupted into madness, the audience was already holding their collective breath. The famous soprano-versus-flute in Act II was a delicately nuanced duel, and so crystal clear in Christy’s presentation that the notes seemed as if they were arriving from on high.

Christy was perfectly paired vocally with her male co-stars – the bel canto of tenor Joshua Guerrero as her star-crossed lover, Edgardo, and, on the other side, imposing baritone Trevor Scheunemann as her domineering brother, Enrico.
Guerrero’s tenor soared to a build and his passionate dramatic portrayal earned bravos in the final aria, “Tu che a Dio spiegasti l’ali.”

Scheunemann brought a defiance to the role that made his Enrico a spoiled man-child. Kristopher Irmiter is Raimondo, the chaplain in the middle, who flip flops between wanting Lucia to be happy, yet believing hook, line and sinker that the forged letters Enrico produces prove that Edgardo has been unfaithful. Irmiter mines the part for all of its gold, taking every opportunity given with the conviction of a man of the cloth.

Dominick Corbacio is Normanno, the captain of the guard, and tattletale to Enrico, telling of Lucia and Edgardo’s twilight visits. Mary Beth Nelson is Alisa, Lucia’s handmaiden. Chaz’men Williams-Ali is the royal suitor, Arturo.

Conductor Alexander Polianichko’s orchestra was moody in all the right places, sensitive in their agility, yet determined in their effectiveness. Perhaps it was the cavernous depth of the stage, but there were times, however, when the orchestra seemed to overtake the singers.

FGO has adapted the revivalist production of Lucia from Houston Grand Opera’s 2010-2011 season, and directed by Drama Desk and Tony Award-winning Scottish director John Doyle (Sweeney Todd, 2006, Broadway). It is perhaps one of the primary reasons to see this piece.

Doyle’s bleak vision of Scotland is presented in a minimalist set of backdrops. There is nary a set piece, except for two chairs at one point that are brought in and a long banquet table. Otherwise, it is only the humongous screens painted with ominous clouds that constantly raise up and down, sometimes even askew to represent the turbulent goings on in this family tragedy. The lighting changes to depict sunnier times (although those are few and far between) and the dark and stormy times (of which there are many).

It serves this opera well as there is no distraction from the characters or the singing. There are other such moments where the supertitles stop their translation, so that your eye is now forced to be affixed to the action on stage. It is wonderfully effective.

FGO’s stage director for the production is Elise Sandell, who followed Doyle’s blueprint, but, no doubt, brought to the stage some touches of her own.

FGO continues to take chances, and their devoted audience appreciates the challenge. However, this production of Lucia is one that can satisfy the savvy, yet has an almost Hitchcockian flavor that might garner more mass appeal. How to attract opera audience newbies is a struggle, but those looking for an introduction might want to give this wonderfully rich and altogether entertaining Lucia a try.