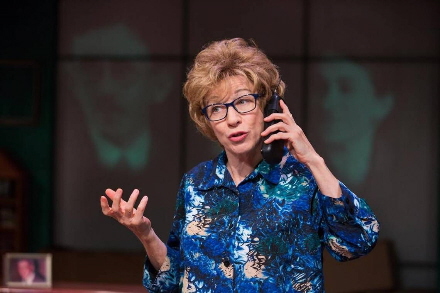 A genial older woman with a warm smile, a self-deprecating charm and a cute mittel-European accent via Brooklyn greets the audience to her apartment like new neighbors. While packing for a move, she tells the story of her life in vignettes marked by humor and pathos.

The narrator providing such good company is the titular heroine of Becoming Dr. Ruth, a one-woman bio-play about the diminutive sprite who aired solutions to bedroom problems on radio and television and thereby destigmatizing sexual dysfunction. It serves as GableStage’s holiday gift and the opener of its 20th season.

The arc of Ruth Westheimer’s amazingly varied backstory ranges from being shipped to Switzerland to avoid the Nazis, the loss of her family, serving as a sniper for the Haganah in Palestine, striving for a higher degree in America, her commitment to sex education for indigent women through Planned Parenthood, and then her surprising emergence as a counselor on the airwaves.

And that’s not half of the 95-minute play by Mark St. Germain, best known for a biographical plays, some successful like Freud’s Last Session, some less so like Camping with Henry (Ford) and Tom (Edison), and  Scott (as in Fitzgerald) and Hem (as in Hemingway) In the Garden of Allah.

The problem with this mildly entertaining evening is not Anne O’Sullivan who has played the role several times before including off-Broadway. She knows every beat of the script inside out and times her performance beautifully under Joseph Adler’s direction. Her cheerful, chatty Ruth is someone you enjoy spending time with.

The first of two problems is the same one with so many biographical plays about people who are not only still living, but whose iconic image is inimitable: O’Sullivan isn’t Dr. Ruth. We know what Dr. Ruth looks like and sounds like, and the undeniably skilled actress O’Sullivan isn’t her. This problem occurs over and over in the genre such as Bryan Cranston’s terrific performance as Lyndon Johnson in All the Way. He wasn’t LBJ.

So that poses a challenge. In theater, the audiences suspend their disbelief about lost boys soaring in the air or tenors overcome with passion bursting into song. But audiences have to work harder to ignore that someone claiming to be someone we know simply isn’t that person.

The second problem is the same one evident when a different production toured through the Parker Playhouse with Debra Jo Rupp in 2014, thereby identifying the problem is with the script. Indeed, the O’Sullivan-Adler version is more enchanting than Rupp’s was.

With a few notable exceptions, whenever Ruth’s narrative touches on a moment of pathos, St. Germain immediately switches into a joke or a humorous anecdote. In this production it becomes clearer that this may be Ruth Westheimer’s own personality and philosophy: when faced with a challenge or a tragedy, she just keeps, in her own words, moving on. But dramaturgically, it’s hard for an audience to process the impact the incidents must have had on her psyche when Westheimer doesn’t reveal the pain and damage.

For instance, she says she unconsciously looked for her dead family in the crowd at her marriage ceremony. Then Westheimer immediately pulls down from a bookshelf her “Dr. Ruth’s Good Sex Board Game” to gleefully show to the audience. It’s as if St. Germain is afraid to let us see her emotionally stumble. This paradigm occurs often enough that it must be intentional. Westheimer is a famously upbeat and positive personality, and perhaps in real life she employs exactly this coping mechanism. But it’s not effective theater.

Indicative of this being the script’s problem, the preceding two paragraphs are nearly direct quotes from my 2014 review. And they are just as true in this production as well.

In a way, St. Germain sees her as a reporting witness to the tumult and evolution of the world through the 20th Century.

The play opens in 1997. While she welcomes the audience naturalistically like visitors, sporting an accent that turns Rs into Ws like “Bwahms” and “diskwiptshun,” she asks the crew for the lights to get brighter and has family photos blown on a projection screen above the set.

In between rolling up knickknacks with bubble wrap, she tells of her childhood in Frankfurt as Karola Ruth Siegel, how her father was sent to a work camp after Kristallnacht, how she was placed with hundreds of children on the Kindertransport to unwelcoming homes in Switzerland, how the last letter from her family came in 1941.

All of this is threaded through with gentle humor, such as revealing that she learned a good deal of English upon arriving in America by reading “True Confessions” magazine.

But the play only comes alive as Westheimer finds her niche in sex therapy and how she took her mission to the airwaves in late middle age. (“In Judaism, sex is not shameful, it is a celebration of love.”)

Until the last 15 minutes or so, references to her refreshingly liberating and bemused views on sex are barely sprinkled across the evening. But when they come, they are indeed the best part of the show as this tiny grandmother issues advice about sexual matters as if she was suggesting the best way to improve a cake recipe. For instance, she advises in a deadpan manner that belies that she impishly knows what exactly she is saying, “I have helped many men with their penises.”

But generally, neither our hostess nor St. Germain make much of an attempt to connect how her past provided the building blocks that would produce “Dr. Ruth.”

Still, Adler and O’Sullivan know how to make the most of St. Germain’s script such as the quiet moment near the end when Westheimer picks up a photograph of her grandchildren. “When I look at them, I know Hitler lost and I won.”

It’s the kind of moment that makes this visit worthwhile.