Frozen Is A Successful Heart Warmer 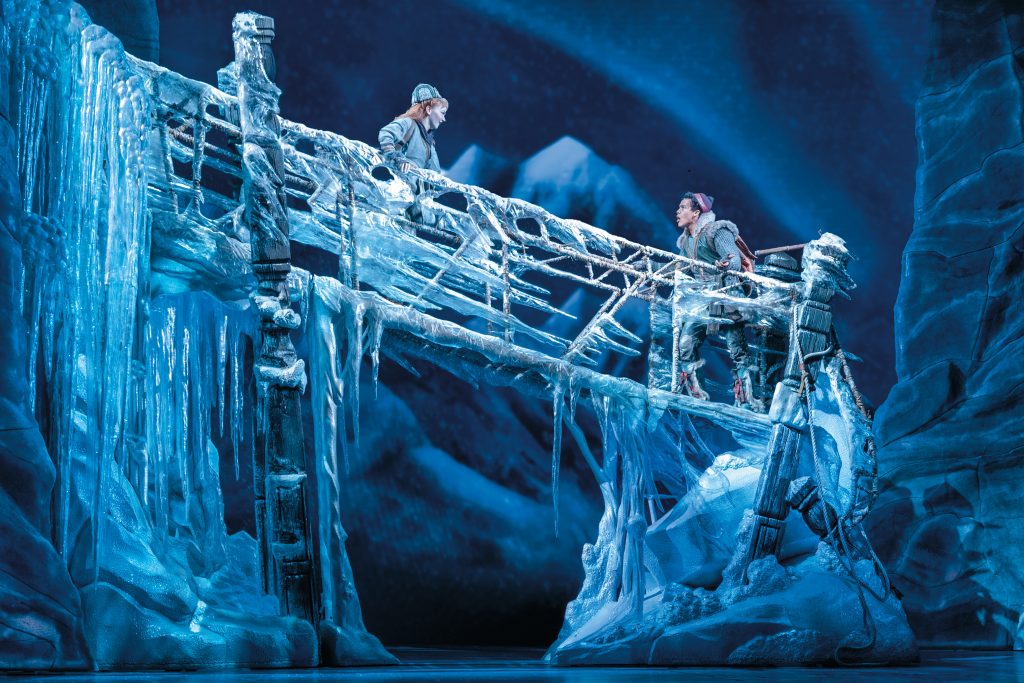 The magic is frozen in the national tour of Frozen / photos by Deenvan Meer.

No doubt most critics will try to weave in the title or lyrics of “Let It Go” in their reviews of the Broadway Across America production of the Disney’s Frozen, running through March 20 at the Broward Center for the Performing Arts in Fort Lauderdale.

After all, “Let It Go” not only is a showstopper but the song has become an anthem about growing up, taking responsibility and looking toward the future. It also is just a cool song that took an extra poignancy this week when the video of a little Ukraine girl singing “Let It Go” in a bomb shelter, no less, went viral. (Google Ukraine girl singing let it go or go to this link. https://www.cnn.com/videos/world/2022/03/07/let-it-go-frozen-kyiv-shelter-ukraine-ac360-wknd-sot-intl-ovn-vpx.cnn

Believe me, I have tried to work some part of “Let It Go” into this review, but it didn’t work. Instead, we’ll just say “Go.”

Go to this charming, lovely production of Frozen with strong acting and singing, energetic dancing and outstanding production values.

I am a strong believer that theater should uplift us, make us question our beliefs, provide thought-provoking ideas, add to the conversation and even, at times, make us uncomfortable. But theater also can give us pure entertainment, allow us a bit of escapism from daily and world problems. And Frozen does just that.

While I believe a critic should keep themselves out of the review, please indulge me. I have never seen the movie Frozen, didn’t know the plot and knew only the name of one character—Elsa, of course. Yes, I had heard the “Let It Go” song. My two companions opening night are uber fans of the movie, and now of the stage version. And they are right.

From the beginning, the musical Frozen sweeps you away with this warm story of sisterhood, controlling your future and strong women.

The two sisters—princesses Elsa and the younger Anna of Arendelle —are close as children, as much siblings as friends. Elsa has magical powers that let her create ice and snow, often doing this to entertain Anna, whose requests segue into the song “Do You Want To Build a Snowman?” But then Elsa accidently harms Anna with her magic. Their parents, the King and Queen (a winning Marina Kondo and Kyle Lamar Mitchell), call on a tribe of trolls, whose leader Grand Pabbie (the energetic Tyler Jimenez) heals Anna, and erases her memories about the incident and Elsa’s magic while warning Elsa that she has to control her powers. To keep Anna safe, their parents separate the sisters within the castle and close the castle to the community. The children’s separation continues after their parents are killed at sea during a storm.

When she is 21, Elsa is crowned Arendelle’s queen. The guests include the handsome Prince Hans of the Southern Isles with whom Anna immediately falls in love. He proposes. She accepts. But Elsa refuses to give her permission. The sisters quarrel during which, in the heat of the moment, Elsa unleashes her powers that puts Arendelle permanently in winter. Branded a monster, Elsa flees to the mountains where she plans to live as a hermit in an ice palace she conjures.

Anna runs after her, leaving Hans in charge of Arendelle. Along the way, Anna teams up with iceman Kristoff and his reindeer, Sven who take her to the mountain.

The Frozen production excels with its strong cast lead by Caroline Bowman as Elsa and Caroline Innerbichler as Anna. By now, both actresses must feel as if they truly are sisters as they have been playing these roles since the national tour launched in December 2021. The actresses have a real chemistry as sisters who genuinely love each other both as family and friends.

They are aided by robust performances by Mason Reeves as Kristoff; Austin Colby as Hans, alternating this role with Ryan McCartan; Jeremy Morse as Duke Weselton and Michael Milkanin as Oaken. Special nod to the puppeteers who make their puppets come to life. F. Michael Haynie has a solid and good comic timing as Olaf. Collin Baja raises the bar on Sven, which must be a physically difficult role; Evan Strand will alternate.

Child actresses Arwen Monzon-Sanders as young Elsa and Olivia Jones as young Anna are terrific. These roles will alternately be played by real-life sisters Natalie Grace Chan as Elsa and Victoria Hope Chan as Anna.

Now, I have to go watch the movie.

COVID Protocol at Broward Center: All guests age 2 and over are required to wear a suitable face covering while inside the theater.\\
Visit the Guest Policy at https://www.browardcenter.org/visit/guest-entry-policy for full details.

This entry was posted in Performances, Reviews and tagged Broward Center for the Performing Arts, Frozen. Bookmark the permalink.