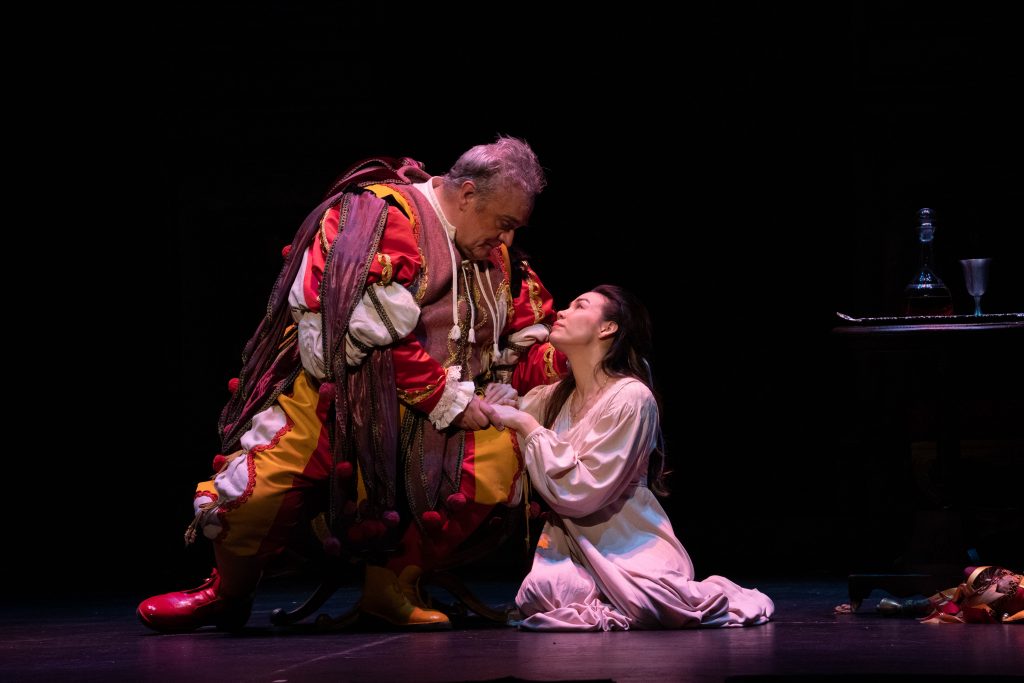 Works of performance-based art often are reinterpreted over time by imaginative artists. But sometimes, as with Florida Grand Opera’s Rigoletto, our perception of a work changes because our 21st Century viewpoint has evolved radically from the time of Verdi’s nearly 200-year-old masterpiece.

In this edition in Miami and Fort Lauderdale, the title “villain” who gets his comeuppance at the end of this revenge tragedy seems for more worthy of sympathy than being perceived as the twisted evil persona he normally engenders, as he did when FGO mounted this in 2012.

As he holds his dead daughter in his lap as Lear did Cordelia, you can only feel compassion and only a bit of blame for the abortive attempt trying to kill the man who blithely seduced and abandoned her.

Further, his daughter Gilda’s unbelievable naiveté makes you want to shake her violently for her cluelessness. And in this outing, there is literally no forgiving the rich powerful playboy Duke whose grossly licentious sexism was likely accepted endemic at the time, but is just despicable today.

And the Duke’s frat boy entourage in Henry VIII garb, who could easily be found out here on the beach at spring break, aren’t boys being boys. They ought to be emasculated.

It’s a dark vision in which the pure are violated and die, the most venal are satiated and go unpunished. Where else can you see an antediluvian attitude in which kidnapping and raping women is considered a gentlemen’s good ol’ sport?

None of that takes an iota of praise away from FGO’s first grand opera this season after the recent A Streetcar Named Desire. Glorious music flowing out of the orchestra pit under conductor Pacien Mazzagatti; fluid staging from director Kathleen Belcher; lush sets and costumes from a New Orleans production; and soaring vocal performances from the three solid leads.

The sole problem, and multiple patrons noted it opening night, was the sound balance between the orchestra and the singers. Whether it was solos or ensemble numbers, the musicians frequently overwhelmed the performers, occasionally to the point of obscuring them completely. The only exception, thank goodness, were in the arias – usually.

Todd Thomas, who has played the jester in 31 previous performances, uses his baritone like an actor infusing lines with pure passion or a growling anger. His tall, broad-shouldered hunchback stomps around the court in the multi-colored motley teasing his master and his henchmen with seeming good-natured gaiety. But his face (for those in the front rows) communicates someone who hates the innate deception in the face of ridicule and abuse heaped on him daily. He makes it perfectly understandable that Rigoletto would hire an assassin to kill the Duke.

As is often the case, the musical highlights are the arias for the lovely coloratura soprano Sharleen Joynt making her FGO debut as Gilda. Her voice effortlessly climbs and drops and trills through Verdi’s impassioned runs. As ludicrous as Gilda can be in 2022, Joynt makes her credible, even when she sacrifices her life for the scumbag Duke.

Jose Simerilla Romero’s lush tenor as the Duke croons the “Questa o quella” and the oft-quoted “La donna è mobile” (a light-hearted dismissal of all womanhood as worthy of being used) with a salacious abandon that begs for a punishment that never comes.

Bass Matt Boehler as the assassin and mezzo Stephanie Douche as the assassin’s “sister” smoothly join Joynt and Thomas in the famed Act Three dueling quartet.