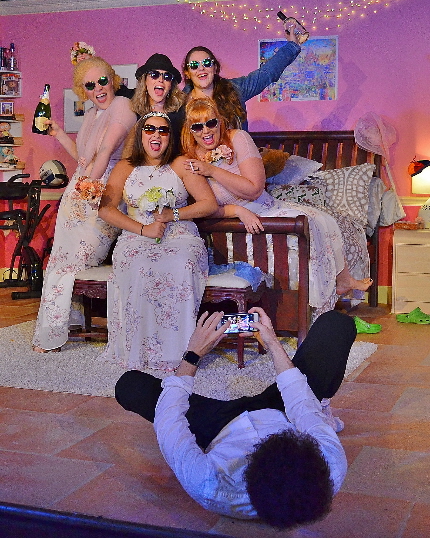 Let’s talk about sex, drugs and relationships. Let’s dish about thoughtless cruel men we’ve known, love and loneliness, fears that hold us back and strengths that can empower us. Let’s cry and let’s laugh and let’s come out the other side wiser, if only in the knowledge that, as Melissa Manchester once said, “We’re not going crazy all alone.”

Such is the core of the raucous, ribald and irreverent celebration of sisterhood embodied in the play Five Women Wearing the Same Dress, receiving a spirited rendition at Main Street Players in Miami Lakes.

In it, five bridesmaids forced to wear a hideous fashion-backward outfit, retreat during the reception to the bedroom of the bride’s sister. Very little happens plot-wise in Alan Ball’s comic and compassionate scrip. Instead, secrets are peeled away like onion layers from the personalities of these five 20-something and 30-something women who are interconnected by blood, friendship and, as they discover later, having had sex with the same man.

The schmoozing occurs in the well-appointed childhood bedroom of Meredith (Lorena Estevez), the rebellious sarcastic younger sister of the impossibly perfect bride whose primary goal is to find some pot in her room to dull the experience. Into this second floor room overlooking the wretched excess festivities in the backyard of this mansion, other bridesmaids appear individually seeking refuge from the ostentatious and obnoxious parade below – but for markedly different reasons.

There’s Frances (Icela Marliese), the sweet-faced young virginal cousin who declines offers of pot, alcohol and much else because “I’m a Christian.” Mindy (Rei Capote) is the groom’s sister, an ebullient lesbian with a quick wit and who describes how she won a beauty contest by secretly lampooning its values of a curvaceous body and limited talent. Georgeanne (Thiana Berrick) was the bride’s high school buddy but who has been distant from her with good reason and who is stuck in a loveless marriage.

Finally, Trisha (Amanda-Lynn Williams) is the deeply disillusioned cynic about relationships with men and the sex in general. Likely the oldest and most traditionally attractive, she also is a former friend of the bride. She has a reputation for fast-living and sexual freedom, but she sees those traits more as not being constrained by artificial social restrictions.

In a charming and quirky afternoon fueled with drugs, alcohol and a desire to hook up with handsome guys below for a sexual tryst, the quintet gossip, tease and dish with acerbic wit about love, sex, the difficulty with relationships, sex, dreams, sex, and sex. All realize that none of them like the privileged snobbish bride. That camaraderie leads to secrets tumbling out, each woman’s insecurities being exposed, and painful memories being shared that require these disparate women to support each other.

One says yearningly of the potential partners below, “All I’m looking for is someone who is single, straight and has a job,” to which her friend quips archly, “Maybe you should lower your standards.”

Or “Scott’s sister is as exciting as getting your teeth cleaned.”

In the play’s closing moments, Trish spars with Tripp (Kevin Rubi) an usher who may provide her with more than friendship.

To be fair, the evening has a slightly “constructed” feel in which the overlaps in these lives seem plotted out on a flow chart somewhere, undercutting a bit of the play’s naturalism and hampering the actresses’ performances which always feel like performances. But on balance, it feels like a half-dozen really well written episodes of Sex and the City compressed into a 90-minute unified whole.

Ball ultimately limns the disconnect of this artificially-induced fairy tale downstairs (termed “the most candy-assed wedding I ever saw”) compared to the realities of being a young woman in this decade.

Incidentally, the dress designed by Ingrid Ojeda is, indeed, a ghastly flower print number topped with a gauzy blue-white shoulder trim and belt, a ridiculous fake pastel rose near the cleavage and the silliest pink gauze wide-brimmed hat.

Sound designer Jason Lyzniak and the director have chosen lots of sly bits of music between scenes that satirically comment on the action such as “Going to the Chapel” and “The Best of My Love.”

Ball, who wrote the screenplay for American Beauty and helmed Six Feet Under, creates a fascinating world of interconnection among very different women who are unaware initially how much they share.

Director Tatyana-Marie Carlo has ensured that each of the characters is clearly defined and she deftly moves the evening with a velocity equal to the quickness of the repartee.

Main Street Players, a longtime community theater recently turned professional, once again adds a promising success to their track record. It’s not a home run, but it has become a company to watch. One hallmark is how it hires young Miami area actors who are not seen much elsewhere and who prove themselves promising talents to watch develop.

Five Women Wearing The Same Dress  runs through Aug. 12 at Main Street Players’ theater, 6766 Main St. in Miami Lakes. Showtimes are 8 p.m. Fridays and Saturdays as well as 2 p.m. Sundays. Ticket prices are $30 for adults and $25 for students, military and seniors. For tickets, visit www.mainstreetplayers.com or send an e-mail to info@mainstreetplayers.com.