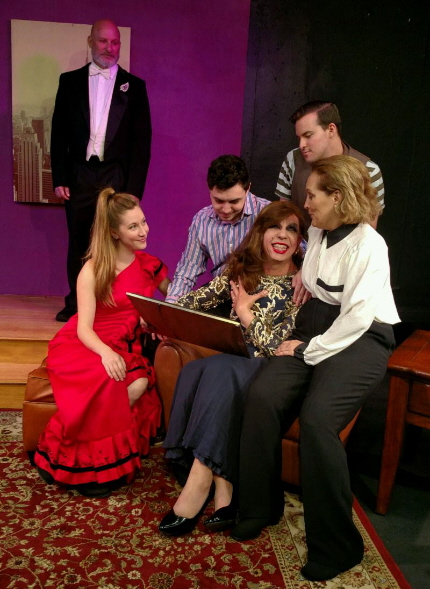 I am what I am,
And what I am needs no excuses
—Jerry Herman, La Cage aux Folles

Decades ago, if you weren’t straight, you were pressed to identify yourself as gay or lesbian. But those straight-jacketed definitions did not neatly fit people attracted to both men and women. Beyond that, some people struggled with complex yearnings that found no popularly accepted tropes in “mainstream” gay culture.

A welcome enlightenment of the past couple of decades or so has added letters to the LG acronym: a B, then a T, then more recently a Q, and the newly-minted additions of I and A.

But Aunt Jack, S.P. Monahan’s world premiere play at Empire Stage, rejects pigeonholing sexuality with a single label or category. Sexual identity is what you choose it to be and Monahan champions paradigms that cannot be categorized by initials.

Aunt Jack explores this through a weird uneven evening. It’s sometimes as broad and shallow as a farcical TV sitcom (“Tonight, on a very special Three’s Company”) and sometimes delivers insightful commentary about navigating an uncertain world currently in flux.

Directed by Michael Bush with an earnest cast, it’s a frustrating production with laudable virtues and bowling ball dropping problems.

The premise: Norman Sable-Church, a young gay man who ran away after breaking up with his boyfriend Ian, returns home to introduce his new love Andy to his three parents: George Church is a 70-ish fiery gay activist; his slightly younger husband, Jack Sable, is an over the-hill drag queen always on stage even at home, and Phyllis Judson is their close lesbian friend who carried George’s sperm to fulfill his dream of being a father.

Two minor but crucial spoilers: George (Harry Redlich) dies early in the play although he continues to haunt everyone, and Andy is a beautiful woman (Shannon Nicole Booth). The stunned reaction from Jack (Charles Baran), Phyllis (Merry Jo Cortada) and the still pining Ian (Daniel Barrett) is rejection of what they erroneously deduce is going on between the two. Indeed, the relationship of Norman (Bobby Eddy) and Andy is far more complicated and sophisticated – which is Monahan’s point as the three others try to sabotage what they see as an unnatural situation for a gay man in the 2010s.

The first act of the play, moving faster than a Brightline express, is dominated by Jack wearing various editions of not very flattering full drag. He spouts bon mots, witticisms and one-liners as if he was performing Oscar Wilde on speed and all incessantly delivered at the top of his lungs as if he was in a 400-seat auditorium rather than a theater the size of your living room. Indeed, some of the play’s repartee is lost as the entire ensemble careens into each other’s lines, covering up set-ups and punchlines.

The issues are sprinkled through the first act, such as George’s academic rant about gays wrongly trying to assimilate into mainstream culture instead of remaining true to themselves while insisting on being part of the community-at-large.

But much of that is drowned out in the first act by sex-drenched “Mary, don’t ask” comedy including a hilarious scene in which Jack honors the memory of his partner by performing his act at a Whole Foods market.

The second act, still leavened with humor, grows darker as the older generation rejects the Norman and Andy arrangement which does not fit the decades-inculcated definitions promulgated by gay culture. Monahan underscores the evolution of sexual identities championed by a new generation for whom the AIDS devastation and the post-Stonewall pushback are chapters in a history book.

In fact, the entire play only gels in the last ten minutes or so when we see where Monahan wanted to go all along. It’s like two tonally separate plays grafted together: one is of the cartoonish Mommie Queerest genre and the other akin to Terrence McNally’s incisive Mothers and Sons.

But the script, direction and some unconvincing acting need tuning up. Some moments make no sense, or no one bothered to explain them to the audience, or there was insufficient groundwork to make them credible. For instance, the second act opens with a family scene in which George apparently has returned from the dead (We are guessing, only guessing that this is a flashback although it’s never explained). In another late scene, one character passionately kisses another on the mouth without a rational reason for it (or, at least, one is never made remotely clear).

Baran’s performance is pitch-perfect as the witty-on-the-outside wounded-on-the-inside bitchy diva with an Ethel Merman-Auntie Mame bray. Unfortunately, other than five minutes near the end, that single unrelentingly camp pitch is all he has. The stagy persona is dead on (it’s killing me not to recall who he is channeling), but his Jack apparently is never off stage no matter the real-life situation. Still, damn, Baran does it well.

The veteran pro Cortada has enough talent and skill to make Phyllis a real person even though the part is written over the top.

Eddy, Redlich and Barrett are passable, although the pouty Barrett only becomes three-dimensional in the last few minutes. Booth’s even-handed performance makes her the only emissary from the real world in the entire evening.

The play was workshopped in New York and another production is bowing in Vermont this week, although the playwright has been on site making changes to this edition.

If the script needs some work, some of the speeches are spectacularly insightful. George says in an address to a university crowd:  “F*** equality! I never understood why we started marching around saying we’re just like everybody else. We are not like straight people. We are better. Those’re the stats, people–we’re kinder, more intelligent, more talented, and better equipped to have healthy relationships. A truly gifted demographic. So with that in mind, would someone please tell me why, of all the causes, all the hills we could’ve died on, we picked marriage?”