God Of Isaac Explores Search For Identity With Humor & Heart 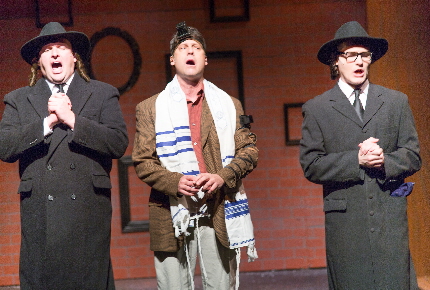 Tom Bengston and Christian Vandepas try to recruit Patrick A. Wilkinson in James Sherman’s The God of Isaac at Broward Stage Door / Photo by George Wentzler

Every ethnicity, nationality and religion prizes its heritage, but Jews put a special value on honoring a direct bond with their forebears stretching across 6,000 years.

That cornerstone of Passover also underlies James Sherman’s 1985 comic drama The God of Isaac, enjoying an enthusiastic and effective revival at Broward Stage Door. But the search for roots – regardless of our background – makes the show easily relatable to anyone living in this nation of immigrants.

Sherman, better known for the wildly popular message farce Beau Jeste, follows genial hero, playwright/journalist Isaac Adams, as he evolves inexorably from a secular Jew-in-name-only into a committed searcher for his religious identity. At the start, Isaac says that the last time he was in a synagogue was for his Bar Mitzvah: “Being Jewish meant no more to me than being right-handed,” he says. By the curtain, he is bringing his grandfather’s Bible and prayer shawl to Friday services.

Set in 1977 and 1978, the catalyst for his sudden interest in “what is a Jew” is the real-life event when neo-Nazis sued to march through the Jewish enclave of Skokie, Illinois, where the fictional Isaac lives.

With Isaac speaking to the audience as tour guide through his new “play,” we follow his travels as he encounters a wide variety of role models, almost all comical in their cartoonish outlines, but each also containing lessons: the studious but jocular rabbi, the angry Jewish Defense League activist, the Holocaust survivor who never forgets his tragedy, among other kinsmen devout and casual. One says his rationale is simply, “I’m a link in a chain for 6,000 years. Who am I to break it?”

While Beau Jeste was broad comedy, Sherman adopts a more realistic if bemused approach here. Isaac offers wry lampoons of pop culture to rib Judaism such as the backseat scene in the film of On The Waterfront in which the Brando character bemoans not pursuing his bar mitzvah: “I could have been a mensch instead of a goy, which is what I am.“ None of them are especially meaningful, but all are droll like an early Saturday Night Live skit.

The final lesson for Isaac is not especially shattering: Each person finds their own definition of being a Jew, and the object of life may be the questioning itself and the journey, not the arrival in the Promised Land. It took him 90 minutes to figure this out?

Much of this works because director Dan Kelley, best known for outright comedies, has found Sherman’s difficult meld of humor and poignancy. He’s had practice: He helmed the last major revival of the play at the 2001 at the 26th Street Theatre in Wilton Manors. There’s a lovely moment in which Isaac replays a conversation with his late father. Once the father has risen from his armchair symbolically leaving for the Great Beyond, Isaac sits down in it, toying subtly with the mantle he has inherited.

Kelley’s casting is especially solid, mostly newcomers to South Florida theater. Patrick A. Wilkinson plays Isaac with a stand-up comic’s attitude, a kind of Seinfeld vibe, but it doesn’t quite hide Isaac’s growing anxiety as the search takes over his life, even driving a wedge in his marriage. He exudes an energy and amiability that wins over the audience instantly and drives the play forward,

He’s well-supported by Stage Door veteran Phyllis Spear as Isaac’s mother who sits in the audience, kvetching and kibitzing through her son’s play.

Each of the remaining cast members plays one major role as well as several others. Kelli Mohrbacher is the agnostic fashion model who Isaac has married but who is unnerved by her husband’s surprising quest. Rebeca Diaz is the childhood girlfriend Chaya who pursues a traditional Jewish life and quotes sages from Martin Buber to Albert Einstein as she tries to reconcile her religion with her crumbling marriage. Tom Bengston portrays the Holocaust survivor, the rabbi and others. Christian Vandepas has the proverbial field day with a range of broad character parts from the threatening Jewish Defense League protestor to a Jewish versions of Huck Finn, Marlon Brando, Henry Higgins and Tom Joad.

Stage Door used to deliver sets that were, to be polite, third-rate. But slowly the staff has been upping its game significantly, still working within a limited budget. This time, the center of the stage is graced with what looks like a fine-grained wooden arch like a synagogue’s ark, flanked on both sides with 10-foot tall vellum pages of the Torah unfurled to the edges of the proscenium.

The God of Isaac intentionally indulges almost every cliché and meme of modern American Judaism, but Stage Door’s mounting delivers a production that also manages be thoughtful while entertaining.

A slideshow can be found at http://www.ourtownscene.org/bsd.html