Maltz’s Lovely The King And I Is Rapturous Musical Theater 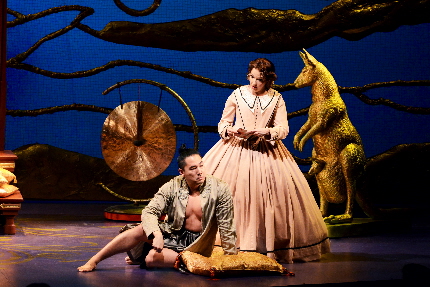 Not taking a thing away from Sondheim, Kander and Ebb or anyone else who followed them, but the Maltz Jupiter Theatre’s glorious production of The King and I reminds you that when it’s done right, really right, nobody can touch Rodgers and Hammerstein for well-crafted musical theater marked by heartfelt lyrics and soaring melody.

Nothing underscores this truism so well as Marcia Milgrom Dodge’s direction. Her actors don’t move around the stage very much when they sing. She just trusts the inner strength of the music and the talent of the cast to put across the meaning with a few hand motions, facial expressions and emotion swelling up from the gut. They just stand and deliver. But it’s as transporting as if they were racing around the set with arms flailing.

And while Milgrom Dodge has some terrific talent to work with – notably Broadway vet Michele Ragusa as Anna – she has superb raw material such as the procession of transcendent musical numbers: “Shall We Dance,” “Hello Young Lovers,” “We Kiss In The Shadows” and “Something Wonderful” – unabashedly romantic sentiment whose purity makes it impossible to mock.

As with Hello, Dolly! two years ago, Milgrom Dodge and the Maltz team respect the tropes of the time-honored piece, but they don’t try to recreate familiar productions. To a large degree, it’s nearly impossible to identify precisely how they do it, but the work seems harvest fresh even though many of the songs and scenes are as iconic as the polka in “Shall We Dance.”

But then they deliver brilliant innovations. The often-boring and lengthy ballet “The Small House of Uncle Thomas” (originally choreographed by Jerome Robbins) is transformed into a Thai shadow puppet play projected on a screen the size of the stage. Ornate puppets designed by Eric Wright of The Puppet Kitchen are deftly integrated with the movement of lithe dancers. The ingenious undertaking, storyboarded by Wright and Dodge, resulted in something evocative, exotic and unique.

Yet the show’s heart remains the clash of two strong-willed people – the imperious King of Siam and the proud English widow he hires to teach his many children and wives, trying in vain to create a harmonious melding of the two cultures. It is both a poignant personal tale and a wise lesson in geo-political relations – with some cross-pollination of insights applicable to both situations.

Of course, the score and lyrics are magnificent – arguably the team’s best. It may not sound much like Southeast Asia, but Rodgers was at the top of his craft frequently flipping the expected direction of a melody line to create a haunting, unforgettable moment. Hammerstein’s lyrics could be complex corkscrews to convey interior tumult such as the King’s “A Puzzlement,” or be deceptively simple with emotionally-freighted phrases such as “Something Wonderful.” You can hear those lessons in lyric writing in the work of his mentee Stephen Sondheim.

Hammerstein’s book is a marvel. Unlike today when many librettos are just frameworks upon which to hang songs, Hammerstein wrote long scenes as skillfully as any dramatist – more skillfully since he was forced to telescope events without making the transitions seem false.

As expected, the Maltz has invested a huge amount in this production and it’s all there to see on stage. Start with a cast of 13 principal parts, 15 other adult actor/singer/dancers who play wives, priests, deckhands and puppeteers plus 12 royal children. Add nine musicians in the pit under Helen Gregory producing as full and flawless a sound as you can hope for. That’s the most bodies appearing in a Florida professional production in a long, long time. Credit them, too, for going out of their way to cast mostly Asian-Americans in the Asian parts, down to the children.

Then appreciate how Milgrom Dodge’s vision is brought to life by the creative team. Leon Weibers’ scores of costumes encompass hoop skirts, glittering headdresses and gold-trimmed everything.

Scenic designer Narelle Sissons evokes the alien world with impressionistic set pieces rather than the usual doomed attempt at realistic throne rooms and the like. For instance, she adorns nearly invisible mesh drops with twisting golden tree trunks or abstract curving tendrils, then adds in teak-looking platforms and gilt-covered emblems of power, all backed up by projected line drawings of a palace exterior or a huge statue of Buddha. It is a visual feast that forces the observer to respect the ancient, evolved culture that the Occidentals are contaminating. The sets look twice as opulent because of Matthew Richards’ lighting plot. Dodge’s choreography is applied with restraint as an accent rather than an opportunity to show off.

The visual excellence is equaled by the human component. Ragusa, who is well-known among professionals in the Broadway trenches, still isn’t a household name. But she is a dead perfect match for the role of spirited Anna, the classic leading role for actresses who have left their apple-cheeked ingénue days behind. Her powerful and expressive voice eases into the songs so smoothly, you know you are in capable hands the moment she utters the first cascade of notes. Yet she invests the songs so completely with her actor’s honesty that they seem newly-minted even though you could mouth the words along with her.

She is closely matched by Wayne Hu, a veteran of non-traditional casting in regional productions. He struts across the stage exuding an autocrat’s Divine Right, but mixes his imperious tone with an appealing confusion about a world whose standards are eroding under him. While much of the score was written for Yul Brynner in that talky Rex Harrison rap mode, Hu exhibits a baritone as full and muscular as his bare broad shoulders.

Most of the rest of the cast is blessed with near operatic voices and respectable acting chops. The standouts are Kay Trinidad as the doomed Princess Tuptim and Christine Toy Johnson as chief wife Lady Thiang.

Another score of people deserve praise, but suffice it to say that the Maltz’s end of the season show will be a tough ticket after word of mouth gets roiling.

The King and I  runs through April 6 at the Maltz Jupiter Theatre, 1001 E. Indiantown Road in Jupiter. Performances at 7:30 p.m. Tuesday-Friday, 8 p.m. Saturday, 2 p.m. Wednesday, Saturday and Sunday. Running time: About two hours 25 minutes not including one intermission Tickets are $52-$59, available by calling (561) 575-2223 or visit  jupitertheatre.org.

To see a promotional video about the making of the show, click here.

This entry was posted in Performances, Reviews and tagged Maltz Jupiter Theatre, Marcia Milgrom Dodge, Michele Ragusa, The King and I. Bookmark the permalink.