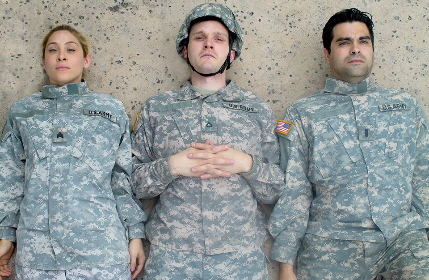 Valentina Izarra, Christian Vandepas and Collin Carmouze are soldiers during the first Iraq War in Ground Up & Rising’s 9 Circles

Arts criticism is by definition subjective, but we journalists like to flatter ourselves that there is an attempt at universal objectivity in it. That’s why it’s uncomfortable but only fair to report that I woke at dawn Sunday realizing that Ground Up & Rising’s production of 9 Circles Saturday night had invaded my dreams.

I’m pretty sure the reason was the nagging dichotomy that the courageous production was so deeply felt and so deeply flawed at the same time – bluntly and uninhibitedly slashing away at one dimension of a brilliant subtle multi-dimensional script.

It was like watching a psychotic on PCP wildly swinging a dull but still lethal scythe, leaving behind precisely the carnage that the wielder intended directly around him, but leaving huge verdant areas tragically untouched.

So this scrappy Miami company co-founded by director Arturo Rossi deserves unstinting praise for attempting this Herculean script and for enabling Christian Vandepas’ volcanic eruption as a profoundly unbalanced soldier returning from Iraq to face charges of committing a horrendous atrocity against civilians.

Vandepas fearlessly opens a carotid artery and spews lifeblood onto the stage until its splashes indiscriminately on the walls like a crime scene. The energy and commitment are breath-taking. The primary problem is that Vandepas and Rossi start at the top of the emotional range and have nowhere to go. And because they haven’t, in fact cannot have laid sufficient groundwork that early in the play, the operatic display of raw emotions seems terribly over the top.

The second problem is that the script by Bill Cain has dimensions within dimensions, thematic layers inside layers that a production is supposed to peel away scene by scene. Instead, Ground Up’s production hammers at only one facet, albeit very well, but one: How we all are complicit in immorally feeding young people into the soul-destroying maw of the machinery of war – and then hypocritically acting morally outraged at the dehumanization we have wrought. (Some serendipitous timing here).

While Cain certainly wants that issue explored, 9 Circles is a much larger and more profound journey that the playwright means to mirror the descent into Hell depicted in Dante’s Inferno. For Cain, this is about an Everyman’s struggle through unsparing self-discovery to his eventual redemption. For Cain, the path to Heaven leads straight into Hell – and out the other side. The Jesuit playwright, who melds theology and theatricality, contends that knowledge is not Mankind’s downfall as it was in Eden, but his salvation. It is only when the protagonist’s illusions and rationalizations are scourged away layer by layer that he finds liberation through blinding self-awareness. That and much else thematically is virtually AWOL in this production.

But without that journey, 9 Circles seems to go on an awfully long time. Instead of an onion-peeling discovery behind what really happened in Iraq and what really is motivating this soldier, what you have is an exhausting battering away with a sledgehammer. And yet you have to admire much of what is occurring on stage, especially in Vandepas’ performance of a point-of-view monologue in an intentionally impressionistic finale.

Full disclosure – and perhaps this skews my judgment: I luckily stumbled across 9 Circles’ world premiere at the Marin Theatre Company in 2010, then helped give it the script the top award in the American Theatre Critics’ Association/Steinberg Award and later wrote an essay about it for the Best Plays yearbook series. I struggled, hopefully successfully, to put aside what I had seen and read to acknowledge that many different interpretations of the same script are valid.

9 Circles was inspired by, but not meant to recreate, a real atrocity in the first Iraq War. In this version, a 19-year-old Army grunt, Daniel Reeves is begging his commander not to impose an honorable discharge and send him back to Texas. It’s not just that the Army is the first place that this misfit has felt at home. War itself is the only place that makes sense to him and, as we will learn, the only place that his homicidal nature is condoned even encouraged.

This is the first of nine increasingly surrealistic scenes separated by major gaps in time, essentially mental blackouts that leave the audience in the same state of disorientation as Reeves when each scene begins. In each vignette, Reeves meets one-on-one with a different Establishment authority figure – military brass, lawyers, a preacher, a psychiatrist – all played by Collin Carmouze and Valentina Izarra.

Piece by piece, the truth of what occurred emerges both for the audience and for Reeves who is in a constant state of denial and incomprehension. He has been arrested and is on trial for his life in a case in which innocent Iraqi civilians were murdered including a teenaged girl who was first raped and then set afire. It is not really a spoiler to say that Reeves is doomed. What Cain is interested in is a human being reclaiming his humanity by acknowledging his inherent frailty – even his inherent sin. Reeves is a contemptible villain to the world at large but just a confused troubled man inside himself. And Cain sees him from even a step further back, perhaps as a compassionate God sees him.

Vandepas has delivered a wide range of characters in recent seasons from a profane puppet in Slow Burn Theatre’s Avenue Q to the terse but tender bartender in Alliance Theatre Lab’s Savage In Limbo. But they don’t prepare patrons for what he does in this murderous role. He looks like one of those disaffected slackers drinking and smoking at midnight outside a convenience store. With sometimes steely, sometimes wild eyes set deep under an overhanging brow, Vandepas’ Reeves has not only drunk the military’s Kool Aid, he has desperately chugged it as the antidote to the poison inside him. But for all his impressive histrionics, he is far more effective in the final three scenes when he goes quiet.

Carmouze, who is the newly-appointed artistic director of the troupe, and Izarra, who was terrific in Savage In Limbo, are just serviceable here, although certainly passionate.

Rossi certainly has ripped emotion out of the entire cast, kept the long play moving at a steady clip and moved his actors around so that the very talky play never seems static. But he has not helped Vandepas build an emotional arc. He just establishes a raging river that flows by the audience instead of allowing us to get inside Reeves and grow with him.

What Rossi and company have done so well is lay out a blistering indictment of war and society’s enabling role in the destruction of the souls of the young people we send to it. It’s a ferocious evening, even if a scalpel has been blunted into a club.

9 Circles runs through July 20 from Ground Up & Rising, performing at Artistic Vibes, a warehouse space at 12986 SW 89 Ave. in Miami near the Falls Shopping Center. 8 p.m. Saturdays and 2 and 6 p.m. Sundays. Runs 2 hours 25 minutes including one intermission. General admission is $25, but free to patrons under 25 years old with government-issued ID. Cash only at the door. The July 20 performance at 2 p.m. will feature an ASL interpreter for the hearing impaired. Visit groundupandrising.org.