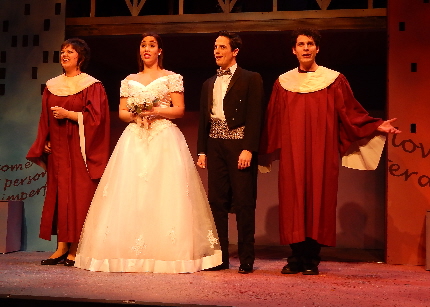 If you’ve never seen I Love You, You’re Perfect, Now Change (highly unlikely that) or if it’s been quite a while since you last saw it, the Broward Stage Door delivers a warm assured production of this seminal entry in the charming-small-budget-musical-revue-about-modern-relationships genre.

Kelley’s honed comic chops inject a wry but controlled sensibility in the humorous skits separating the musical numbers. He and Gee also insist the singers act the songs with a pronounced eye for the gentle comedy that Di Pietro and book writer Jimmy Roberts envisioned.

If you gave just moved here from Latvia, ILYYPNC is a 1996 chamber musical that ran more than 5,000 performances  (reportedly the second-longest running musical in off-Broadway history) before becoming a staple of small and mid-size regional theaters across the world.

It was especially well-received in South Florida where it became a perennial: two runs at Actors Playhouse in Coral Gables beginning in 1998, one at the Wilton Manors 26th Street Theatre as well as Fort Myers and the Delray Playhouse, among others. A solid production played The Plaza Theatre in Manalapan in December 2013 with Mike Westrich, Leah Sessa, Mia Matthews and Wayne LeGette, who had played in it four times before in more than 400 performances.

A procession of original songs and skits trace the rocky arc of relationships from uncomfortable first dates to hook-ups in the twilight years. Two men and two women play a variety parts as the evening depicts how marriage itself and having children change romantic relations.

A late 20th Century mentality suffuses the show, although we perceive a few of the more dated elements may have been weeded out of the script. But its emotional center is timeless and easily relatable – which is the secret of its success: Most people recognize themselves in the situations ranging from the boring banter on an early date, to chore-harried parents eagerly anticipating a rare respite to have sex.

What makes ILYUPNC stand out in general is that its music and lyrics are winning, but what makes this edition work are the performers’ work shaped by Kelley and Gee.

For instance, Jill Taylor Anthony tweaked every comic nuance from the spoof of a country lament, “Always A Bridesmaid, Never A Bride” in which the singer doesn’t regret not being married; she just abhors the ugly dresses that her friends have forced her to wear in many ceremonies.

Michael Linden is trapped by habit in communicating in baby language. But as he warbles a nonsensical lullabye, he uses his child’s large stuffed bear first as a stand-in for the infant. Then he manipulates the doll into a puppet who sarcastically cocks his head in disbelief at the increasingly puerile words that Linden is uttering,

Senise Nunez has a lovely smooth voice on display in the poignant “I Will Be Loved Tonight,” one of the most moving songs in the show. But she shows her comic acting ability as a 40-year-old coming off a bad relationship and gingerly making a video for an online dating service.

Brad Rakushin quietly and movingly sings of the joys of a sustaining marriage reaching early senior status in “Shouldn’t I Be Less In Love With You?”

Since it’s a small show, Stage Door has once again hired a two-piece live band consisting of Gee and violinist Silvana Lanfredi. Their lovely interaction is one of the production’s strengths. They let the music breathe, especially the ballads. In the theater next door, Cabaret, which needs a large expensive orchestra, is using pre-recorded digital music tracks and the freshness and immediacy are noticeable.