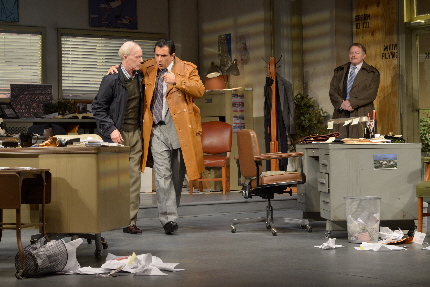 In Death of a Salesman in 1949, Arthur Miller declared that the pyrrhic pursuit of the American Dream was a tragic waste because the fool’s gold was a hollow fraud; in Glengarry Glen Ross in 1982, David Mamet excoriated Americans for having not learned anything.

Worse, Mamet contended that the dogged quest itself had become the way that too many Americans defined themselves – a doomed pursuit that infected the pursuers with its corrosive moral bankruptcy.

And now, 33 years on, that anti-ethos has become the unquestioned de facto standard for large segments of society. Glengarry Glen Ross is no longer news, it’s a mirror.

This is underscored in Maltz Jupiter Theatre’s courageous and skilled revival depicting a group of foul-mouthed cutthroat Chicago real estate for whom nothing is out of bounds in order to make a sale. To be limited by conscience, integrity or simple decency is seen as the ultimate and fatal weakness. Lying, cheating and fraud are not simply accepted tools of the trade, they have become inculcated over the decades into these people’s DNA.

We say courageous because Glengarry’s jet dark theme and profuse profanity is several steps beyond the comfort zone of the Maltz’s traditional audience, which prefers Hello Dolly and Fiddler on the Roof. We counted at least 31 people leaving for their cars at intermission and many more empty seats when the second act began.

But the Maltz production under the sure deft hand of director J. Barry Lewis is a meticulously crafted and executed production of an unsettling even unpleasant masterpiece of playwriting.

Glengarry is a classic example of Mamet-speak, a carefully-choreographed ballet of verbiage whose non-stop obscenities resemble the footwork in a cage fight but requiring the co-dependent timing of a trapeze act.

The seven actors here have nailed the highly stylized torrent of words spewing out herky-jerky like a broken fire hydrant. The words race out of mouths, often not waiting for the other speaker to finish their thoughts let alone their sentence, because no one actually cares what anyone else is saying. The rhythms are reminiscent of riding along a rutted country road with worn-out shock absorbers.

Just as impressive, the actors and Lewis have captured not just the bottomless need for ever more success, but the underlying terror driving these men that they might lose that define their sense of self-worth. What they don’t know but the play will illustrate – just as Willy Loman learned – is that the scorpion is in just as much mortal danger when it stings everything that moves.

The premise is that a group of salesmen in a seedy real estate office in Chicago in 1983 are in a desperate sales competition to unload a large amount of Florida properties bearing blandly generic manufactured names like the one cited in the play’s title. They must either produce, often with unpromising leads, or lose their jobs.

The most successful denizen is the no-longer-young hotshot Ricky Roma (Peter Allas), an arrogant, obnoxious but charming-on-demand hustler with a supreme confidence in his  ability to “sell something to people who don’t want it.” We meet Roma in a Chinese restaurant wheedling his way into a sale to a woebegone prospect James Lingk (Dan Leonard).

Roma’s former mentor is Shelly “The Machine” Levene, a much older colleague who is agonizing through a paralyzing demoralized low point, perhaps the end of his career.

They are competing with Dave Moss (John Leonard Thompson), another go-getter who, like Levene, is being giving rotten customers leads, and is considering burglarizing the office to get his hands on the premium potential customers. Moss is trying to enlist George Aaronow (Peter W. Galman), a more sad sack type undergoing his own dry period. They work for a cold, pragmatic young office manager without any street experience, Williamson (Cliff Burgess).

Indeed, somebody does burglarize the office and a detective (Kenneth Kay) is called to investigate, imperiling some people not just with failure as a salesmen but with jail time.

The 1992 movie version with Al Pacino and Jack Lemmon added a character not present in this version. Alec Baldwin was inserted as a soulless trainer who belittles and threatens the sales force.

Everyone connected to this production exposes the naked greed and fear in a dazzling morality tale that will have some people squirming uncomfortably from recognition, much as they did in 1949 when staring into Arthur Miller’s mirror.

Every member of the cast is fine, but special shout outs are due two men. People who did not see Thompson as the malevolent thief in Dramaworks’ American Buffalo in 2010must have been surprised that this was the same actor who inhabited the gentle, mentally unraveling minister in Dancing at Lughnasa last season. His Moss is a curdled soul who long ago sold his ethical compass for an edge on a deal.

But especially outstanding was Donohoe, who was the frightened visitor in Dramaworks’ A Delicate Balance. Here he portrays a man who in one scene has lost faith in himself and is desperate enough to do anything for a chance to resurrect himself. And in the next, he is supremely confident is in his abilities and overconfident about his future.

Allas has the showiest role and he luxuriates in it, but he is missing that double helping of power boost caffeine that many his predecessors like Pacino and Joe Mantegna have imbued in their performance. Part of it may be that he has high hoarse voice that isn’t as commanding as it might be, but he still carries off the role.

Scenic designer Anne Mundell, responsible for the audience-gasping upscale living room in last season’s Other Desert Cities once again creates superlatively persuasive and detailed environments, both the kitschy Chinese pagoda restaurant that serves as the salesman’s watering hole, and the trashed down-at-heels institutional real estate office. Among her talents are finding tiny grace notes like the generic hotel-auction paintings of birds that serve as a failed attempt to brighten up the office, or the slightly askew blinds above the Chinese restaurant’s red-leather banquettes.

Kirk Bookman subtly tweaks the lighting as the scenes progress and Marty Mets overlays the evening with authentic sound effects during scene changes such as the bustling kitchen of the restaurant. Robin McGee has carefully chosen the clothes for each man with such notable character reveals as Roma wearing what he thinks is a stylish long leather orangeish trench coat.

None of this would work if not for the fine-grained work of Lewis shaping every moment and nuance of these abusive rants emerging like staccato machine gun fire, punctuated by other characters grunts, half-lines and incomplete thoughts.
He orchestrates intense games of killer ping pong where words are used a weapons to wound.

The Maltz may not please many of its regular patrons with the bitter brew, but it has produced a dazzling and bracing evening of propulsive theater.

One last time: The program states it on the second page, there are signs at the entrance repeating the warning, Producing Artistic Director Andrew Kato even mentions it in the curtain speech: These guys utter every locker room obscenity you’ve likely ever heard – and they do it all night long. It is completely defensible because this is how these macho men speak. But for some people, it’s going to be upsetting. One man in the audience said at intermission, “The guys at the office talk like this but I didn’t expect to hear it in a theater.” Well, expect it. And somebody explain to me the parents who brought their early elementary school-age daughter and son to the show!