Posted on February 3, 2015 by Bill Hirschman 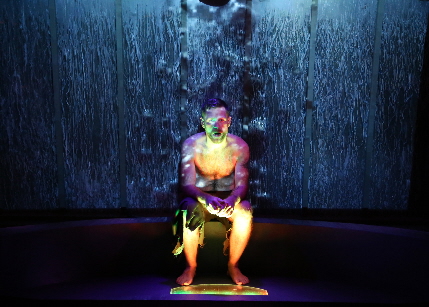 Steve Yockey may be a modern day version of Jean Paul Sartre. Sartre? What does that mean? Yockey’s play Octopus gets quite an imaginative and adventurous staging at Island City Stage — but there’s really no other way to approach Octopus. Yockey dishes out theater of the absurd — some of Sartre’s existentialist leanings have no doubt seeped into the playwright’s psyche.

You see, in Sartre’s existentialism, as in existentialism itself, people are free and therefore responsible for what they make of themselves. With this responsibility, according to the definition of existentialism, comes a profound anguish or dread. That tips the iceberg of what Yockey’s play Octopus takes on in its oddly dark comic and tumultuous story.

Settling in, one might not expect in the first, say 20 minutes that Octopus would run so deep. It appears to be a comic little ditty about a young, gay cohabiting couple, Kevin (Chris Mitchell) and Blake (Craig Moody) who decide to take a walk on the wild side. Well, Kevin has initiated the walk; Blake is apprehensive. Another couple who they have met in a bar, Andy (Christopher Kauffman) and Max (Juan Gamero), are on their way over for some wine and for one other very specific reason: to have sex with them.

Blake’s anxiety over the night is quelled when Kevin soothes him by making a pact that if anything gets uncomfortable they’ll share a secret word and the whole game will be off.

After they arrive at Kevin and Blake’s place and there’s some small talk about Riesling over Pinot Grigio (Andy and Max, who have been together for a while, seem to have some dissension over the idea of the romp, too), clothes start to be peeled off. The lights dim to blue, bathing all four men, now completely naked, in cool light. They do a slo-mo tableaux, simulating group sex.

As the lights come up and it’s the next day, remorse is in the air. Blake is fine, but Andy is jealous over the attention his boyfriend received from the two men. At first, it seems as if he’s battling a green-eyed monster over the man-handling of his boyfriend, but then it becomes clear that he’s ticked at the lack of attention he received.

The conversation gets a halt when a telegram delivery boy (Kristian Bikic) appears at the door. He’s dressed like an old fashioned Western Union guy, yet dripping wet, although Kevin comments it’s sunny and dry outside. Hmmm. The telegram, of course, is odd and cryptic — something about Andy being at the bottom of the ocean.

Here’s where Yockey goes all Sartre, conjuring up the absurd and heaping buckets full of issues for the audience to ponder including how we treat our loved ones, the fleetingness of relationships, the difference between love and lust, and the selfishness of pleasure. The play also has an overarching storyline about HIV-AIDS, yet even Yockey seems to question his decision to give the illness center stage. There’s a message in his words that he, too, felt the decision could render Octopus at risk of becoming a modern-day morality play. “It’s not even something people get anymore,” Blake says. And while that is far from the truth, the HIV-AIDs theme in queer theater does seem a bit passé.

However, the concern washes away with Yockey’s incredible originality and, with this production, Island City Stage’s ability to take on a play that has many challenges, mostly in how the demanding show has to be staged. (We don’t want to give away any of the surprise here; you’ll just have to see for yourself what we’re talking about.)

Yockey has created a piece that has more than its share of “how you gonna do that?” for a director, but Andy Rogow confronts the monster head on. His direction moves the play along with a tension and anxiety that ups the ante on stage as the confusion and sense of terror continues to build. There’s an edge-of-your seat nervousness, too, that creeps up in the small confines of the Empire Stage space. It’s all quite fun and a bit like being on a scary amusement park ride.

There’s also some amazing execution in the fight choreography by John Manzelli as Chris Mitchell and Kristian Bikic go head to head and fist to fist not even a few feet from the first row that’s looks as believable as any street brawl.

The ensemble is first rate, especially the pairing of Mitchell as Kevin and Moody as Blake. When Moody describes the night of sex and how the two men tasted — “Max like cigarettes, Andy like mint” — he paints a vivid picture. Mitchell’s yin to Moody’s yang creates a chemistry that is complements the juxtaposition that’s inherent in the play – the back and forth between reality and absurdity.

Gamero’s almost sinister portrayal of Max creates an essential eeriness. Kauffmann has one of the most difficult roles in the play as Andy, where he is taxed with delivering an overly long and unwieldy monologue, yet he masters it.

The 85 minutes swim by at a clip; the lights go up and there’s a collective feeling in the audience that something has happened. We’ve been whipped around in the vivid imagination of Yockey’s deeper meanings of life and submerged in the world of Octopus as envisioned by Island City Stage. While it may leave some scratching their heads, there’s no doubt that what’s emerged is gripping good theater.