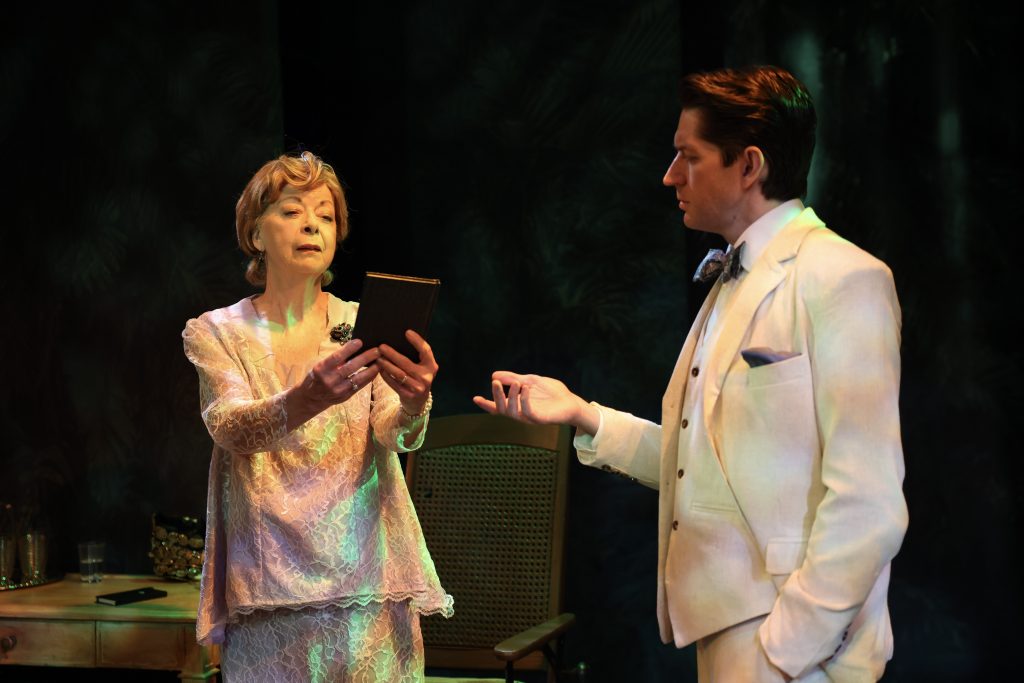 Tennessee Williams’ bizarre one-act stage play Suddenly Last Summer – better known for its lengthier 1959 film version with Elizabeth Taylor – presents a considerable challenge for theaters to pull off with its quirky characters, its quirkier premise and its total abandonment of theatricalized naturalism in favor of unabashed symbolism.

Island City Stage should be commended for the courage to tackle this work at all and considerable praise for wrestling it to an acceptable draw.

With the motivating character being eaten alive by a mob, an aunt threatening to have her niece lobotomized and almost everyone haunted by a nightmarish episode lyrically spelled out in the finale, well, this is theater of a brand not frequently seen on South Florida stages.

Which doesn’t mean it’s not legitimate on its own terms, only that it requires the artists and the audience to identify and accept its vision. Although Williams had toyed with less traditional genres before and around The Glass Menagerie and Cat on a Hot Tin Roof, Suddenly marked a pronounced left turn into a highly theatrical, borderline surreal sensibility that he explored more frequently through the rest of his career.

So if you can dive into the world that Williams intended, then director Andy Rogow and company have done reasonable justice to this tale of greed, alleged insanity, the vagaries of sensitive creative souls, dysfunctional family infighting and the most uncomfortably tight mother-son relationship since Jocasta and Oedipus.

In any case, any opportunity is more than welcome to see Angie Radosh in action, here as the alternately haughty, imperious, vulnerable, grieving, cold, predatory, wounded mother and a half-dozen other qualities etched via an expressive lived-in face and nimble voice. Radosh, a superb actress who has played Williams’ Amanda, Joan Didion and an elephant with equal enviable skill, notches another memorable portrait. She never stops reacting in character-revealing expressions even when another creature is deep in the spotlight.

A quick refresher: We’re in a lush patio in New Orleans Garden District in 1936 (the impenetrable jungle of foliage surrounding wicker and iron lounge furniture is thanks to designers Ardean Landuis and Rogow plus scenic artist Juan Prieto.)

Grande dame Violet Venable is bemoaning the mysterious death of her poet son Sebastian on a trip to Europe last summer. To say these one-percenters were close as they toured the world is a gross understatement. But Sebastian abandoned her after a stroke in favor of going off with his lovely cousin Catherine (Jeanine Gangloff Levy). Perhaps something may have been going awry with possessive Mom? But the toxically resentful Violet says, “If he had stayed with me, I could have saved him.”

On that trip he was drawn to a beach populated by filthy homeless young boys. Something horrible and fatal happened, sending Catherine into a hysterical state. She was institutionalized against her will on Violet’s dime. Violet has brought Catherine to her home under the guard of a nun (Carol Caselle) to get the full story and looking for revenge for Catherine’s role in the abandonment. Catherine, already given electro-shock treatments without the kindness of strangers, is threatened by the presence of a young ambitious funding-hungry doctor (Jonathan Furedy) whose hospital specializes in experimental lobotomy.

Just to add another complication, Catherine’s penurious mother (Lisa Kay King) and brother (Christian Vandepas) want Catherine to cooperate so they can inherit their share of Sebastian’s wealth being held hostage by Violet.

After the doctor drugs her in anticipation of a grant from Violet, Catherine succumbs to recreating every step of the tragedy in lengthy and lurid detail.

Levy, who has enhanced musicals from 9 to 5 to Legally Blonde to Disaster, has a truly difficult role. She, with Rogow, have carefully labored to portray Catherine’s understandably unhinged and ever-increasingly terrified state without going over the top, especially in her long play-ending horror story. It’s a solid enough performance although it could deepen later in the run to have a few more colors than the one driving emotion.

The rest of the cast (including Laurie Tanner as the servant) is serviceable if not especially memorable, but some of that can be blamed on Williams who only uses them to advance the plot and provide ammunition for the symbolism.

Rogow has smoothly staged the evening both emotionally and physically, acknowledging but never hammering Williams’ stream of metaphors and symbols drenched in honeysuckle, cigarette holders and frozen daiquiris. Rogow guides the production with a sense of closing doom that the truth will inflict. It is classic Williams that a vulnerable artistic soul is eaten alive by an uncaring opportunistic society unworthy of him.

David Hart has immersed the proceedings with sounds of nature, crickets and wind that escalate along with an ominous sound that could be the closing pack of feral youngsters.

To be fair, the material is meant as a kind of fantasy that threatens to tumble over into cartoonish melodrama. This is a tough play to pull off. I saw a production a few years ago by reputedly one of the best companies in New Orleans, a few blocks from where the play takes place, and it was memorably awful.

So give props to Rogow and Island City Stage for an evening taking you a strange world of tortured troubled souls struggling to come to terms with a unforgiving world.

Notes:  For helpful tips about directions, parking, arrival time, etc., please visit the Contact Page at http://www.islandcitystage.org/contact/ .  Do not park in the retail spaces directly across from the theater.  They may tow your car.