Posted on September 7, 2013 by Bill Hirschman 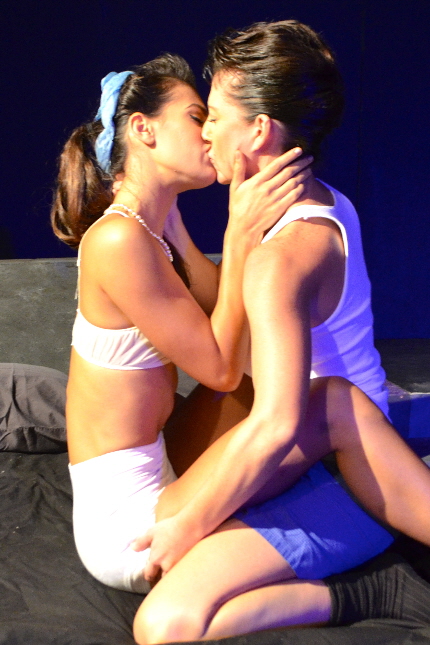 One moment, the lesbian heroines were purging profound angst at hiding their sexuality in the repressive Eisenhower Era; the next moment, a caricature spouted speeches so purple that it had to be satire.

The archly knowing humor firmly told you that you should not – and did not — believe what was happening for even two seconds. Therefore, you never cared a whit for these people who were agonizing as they try to carve a life just being who they are. That’s the frustration: Maybe you weren’t supposed to believe it because it’s intentional satire or supposed to care about the people because it’s intentional melodrama populated with caricatures. The point is you just didn’t know.

This is a heartbreaking disappointment. We’re unabashed fans of veteran actress Kim Ehly who founded Kutumba and wrote the far superior Baby GirL last season. She directed this second production, but the schizophrenic script is by Kate Moira Ryan and Linda S. Champion is based on three pulp novels by Ann Bannon from the late 1950s and early 1960s.

The plot tracks intertwining relationships among three lesbians and a gay man in pre-Stonewall Greenwich Village in the 1950s, interspersed with scenes from a failing marriage in the 1960s between one of the lesbians and her Neanderthal of a husband.

It opens with dewy Beth (Sandi M. Stock) leaving her college buddy Laura (Blaze Powers) at the train station with a lengthy smooch on the lips. Laura, as ridiculously naïve as Dorothy from Kansas, goes off to New York where she wrestles with feelings for her roommate (Christina Groom). She comes under the affectionate ministrations of gay pal Jack (Matt Stabile) who calls Laura “Mother” every three lines (really) and under the threatening/alluring glare of the ultra-butch Beebo Brinker (Niki Fridh).

In California nine years later, Beth is discovering that her marriage with Charlie (Rayner G. Garrachan) is melting down. Her sexuality is awakened by lesbian pulp novels and Charlie makes Ralph Kramden seem an enlightened feminist.

Beebo narrates the tale with verbiage echoing sixth-rate Raymond Chandler. She’s dressed like the juvenile delinquent Anybodys from West Side Story, complete with a sneer curling her lips and a cigarette pack rolled up in her white T-shirt next to the chip on her shoulder. Beebo seems as tough as Nine Inch Nails but she falls in love with virtually everyone else in the play.

Laura and Beth are frequently saddled with scenes in which they profess undying love for someone, have sex with them, then hate them, then love them, then break up with them, all in the same three-minute scene. Meryl Streep would falter making these split second changes remotely convincing.

From there, it’s an overheated melodramatic series of emotional couplings interspersed with a lot of long kissing and women wrestling in bed while still wearing period white underwear or negligees, and in one case, pearls.

Whatever grooves the playwrights and Ehly were trying to create, only two of the six actors came close to convincingly inhabiting them: Fridh’s archetypical Beebo and Groom as a trio of characters including the not-too-bright roommate. Groom, as a dissolute party guest, nails the tone when she holds out an unlit cigarette and asks someone, “So, I have to find my own flint and rock?”

Otherwise, while the entire earnest cast was trying hard, most of the acting was more wooden than a Louisville slugger, baby, as Beebo would say. The leaden sledgehammer dialogue didn’t help. What to make of Beth’s husband’s incredibly boorish remark, “I thought giving you two kids would straighten you out.” The opening night audience thought that was a laugh line.

Another laugh line as far the audience was concerned was when Jack gave relationship advice: “Laura, we can’t think straight because we always think gay.” This exemplified the problem. In other productions, campy humor threaded through the story, but these lines weren’t meant to be funny. They were meant to   compassionately depict people struggling to discover their sexuality and negotiate the LGBT culture of the 1950s. That was lost here.

Among the stronger aspects was the period costuming by Melanie Garbo and Ehly.  Also, the sound design by Nicole Stodard and David Hart enhanced the scenery changes with wry choices of pop hits from the ‘50s that commented on the action in the previous scene.

Look, there is an audience for this and doubtless we’ll hear blowback from them. A woman behind us opening night gushed after the lights came up, “That was awesome.” Well, no, it wasn’t. There is a genre whose success relies on the comforting validation when a minority sees themselves on stage. Jews like myself laugh uproariously and unjustifiably simply because a character injects the words oy, schmuck or meshugganah. And for more than two decades, a cottage industry has flourished for gay and lesbian plays. Some are hilarious and/or touching like Paul Rudnick’s Jeffrey and Ehly’s own Baby GirL. But based on what we’ve seen too often in South Florida at companies like the late Rising Action, quality is not guaranteed for gay-centric plays any more than it is for WASP-centric plays. Frankly, gay and lesbian audiences deserve better and ought to demand more.