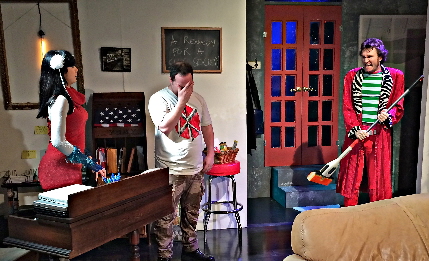 Indeed, this mashup elicited plenty of laughs – resulting both from the revisionist spin at 2000 rpm and from the classic comic paradigms that Simon was a master at crafting. Most folks opening night, including us, were giggling and guffawing.

That said, this exercise in stylistic schizophrenia didn’t land solidly as its creators hoped because you can either embrace Simon or distance yourself. It seems you can’t completely succeed at doing both simultaneously. These styles are at war with each other, undercutting each’s effectiveness.

Simon’s lesser known play set in the mid-1960s finds friends Norman and Andy producing a left-wing magazine Fallout in their San Francisco apartment. Norman becomes insanely infatuated with new neighbor Sophie, a beautiful former Olympic swimmer who is unabashedly of the my-country-right-or-or-wrong mentality and engaged to a Marine. The very smell of Sophie drives Norman to such distraction that he can’t focus enough to write. That endangers the magazine and spurs Andy to keep Norman on track by any means, including hiring Sophie even though she has no secretarial skills let alone journalistic ones. The original Broadway casting is instructive in seeing Simon’s vision (although he didn’t like the direction): Anthony Perkins as Andy, Richard Benjamin as Norman and Connie Stevens as Sophie.

What ensues is a classic Simon opposites-attract love triangle with increasingly silly emotional collisions and delivered with the post-vaudevillian humor that Simon, Woody Allen and Sid Caesar developed into a minor art form in the 1950s and 1960s. Whether that brand of humor speaks to you in the 21st Century can be debated all night long, but Simon truly had a genius for it.

But the idea that this region’s leading avant-garde company would undertake an embodiment of old-guard theater means you’re in for a rethinking of the raw material. Traditional tropes will get at least an affectionate nose-thumbing if not outright repudiation.

Mad Cat director Paul Tei and his company did not change the basic script. Simon’s wordplay and sit-com situations are intact if buried. This is crucial to understanding how this production eventually played out on stage.

But Tei set the show in 2066 when America is edging into a technologically deteriorating dystopia. He added a two-piece band that commented on the humor with percussive rim-shots and sardonic wah-wah guitar licks. Each character sing solos at a microphone with what we assume were intentional flat and off-key notes. A narrator read the stage directions aloud after which the actors performed the previously described actions. Take that, Neil.

Most emblematic of the Mad Cat vision (major spoiler alert, at least we think it is ) is Tei turned Sophie from an All-American golden girl from the small town South into what many audience members assumed for the first hour was a malfunctioning robot. Seriously – herky-jerky movements as if her motors were misfiring, deep teal lipstick and the speech patterns of a broken recorded voice like you used to hear on elevators, plus a perpetually befuddled expression to the point that you expected her to say at any moment “that does not compute.”

The kicker is (here comes the spoiler) at the end of the first act when she goes to the microphone. She sings Linda Ronstadt’s 1977 hit “Blue Bayou” with one word changed when describing her yearning to go home – Blue Bayou is a planet. If you catch that one word, you realize that Tei’s Sophie is an alien.

Some viewers might be tempted to say that such choices make no sense, and perhaps that’s part of Mad Cat’s distancing mechanism from the venerated Simon. But that war seriously undercut the comedy as well as the narrative drive that could have sustained an audience for 2 ½ hours.

As far as “makes no sense,” Tei and his colleagues doubtless could riff over a beer on the internally consistent rationales for every artistic choice. But very little of that reasoning came across to the audience. For instance, why would an alien utter the rabidly pro-America sentiments that Simon wrote for Sophie? Is this a comment on the conservative politics of so many Cuban immigrants? Who the heck knows?

The trick here, as with many Mad Cat shows, is to jettison your preconceptions, meet the show more than halfway and enjoy the ride for what it is. That accomplished, the show is somewhat entertaining.

The crippling problem, even on Mad Cat’s own terms, is that the three actors under Tei’s directions stylistically were acting in three different productions and that mash-up never gelled.

Jessica Farr, whose acting was so remarkable in MixTape 2 and who has written several works or Mad Cat, was technically impressive as Sophie. Her performance on its own terms was enhanced by the aforementioned physicality and vocal intonations that she delivered so skillfully. Whether she or Tei came up with the idea, her Sophie drolly butchered the pronunciation of certain words such as “booooss” for bus. These kind of Mad Cat embellishments of Simon’s script were consistently amusing once you accepted the alien conceit.

Noah Levine (memorable in several Mad Cat shows including Blow Me) was wonderfully out of control as an over the top love-struck clown in both the classic theatrical sense as well as the Barnum and Bailey sense. Seemingly powered by some nuclear conflagration inside, Levine not only pulled out all the stops but ripped them out of the organ, his tall and gangly body flying all over the apartment. Levine’s Norman was a daffy and demented creature whose rubber long limbs were always in motion when they weren’t posed as some absurd angle. He was downright hilarious.

Theo Reyna (so fine as one of the sad sack residents of Centralia) had the straight man role whose humor is deeply rooted in Simonesque banter. But Reyna played Andy in a somber, phlegmatic manner, especially contrasted with Levine’s manic mein. This would have worked well in another play.

The disconnect is that Simon’s dialogue is constructed around specific time-tested speaking rhythms proven effective as late as the sitcom era of the 1970s. You have to respect those rhythms, otherwise it’s not a tenth as funny. Here you have a quaint Spock from Star Trek, a Jim Carrey from The Mask and a John Belushi from his later films, all individually funny characters but none of whom would survive ten minutes navigating the banter in The Odd Couple or The Carol Burnett Show. Imagine, for instance, a robot trying to make “Who’s On First” funny.

The amazing aspect is that Simon’s writing is so strong and those ancient rhythms so deeply burned into our consciousness that we impose them anyway in our aural perception, So it’s still pretty damn funny.

The production itself revels in the delightfully profligate imagination that is a Mad Cat hallmark, from the music provided by the Space Heaters (Brian Sayre and Stephen G. Anthony who doubles as the narrator) and a lot of sound effects by Matt Corey laid in precisely by production stage manager Veronica Soderman.

Best of all are the phantasmagorical costumes by Karelle Levy who was responsible for the garb in Blow Me about fashionista Isabella Blow. Levy has Andy wearing variations on post-grunge post-slacker garb. But her wardrobe for the alien Sophie are sparkly, furry and exactly what an alien might buy for herself at a thrift store. Finally, Norman is dressed in an increasingly outrageous array of orange, peach, electric red and yellow outfits that look like a clown recently escaped from a futuristic circus.

This Star Spangled Girl is intriguing and good for a lot of chuckles. But it’s also a bit of a headscratcher.

To read a feature story about this production and Mad Cat approaching its 15th anniversary, click here.

To read the director’s note about his vision of the play, click here and scroll to bottom of the page.