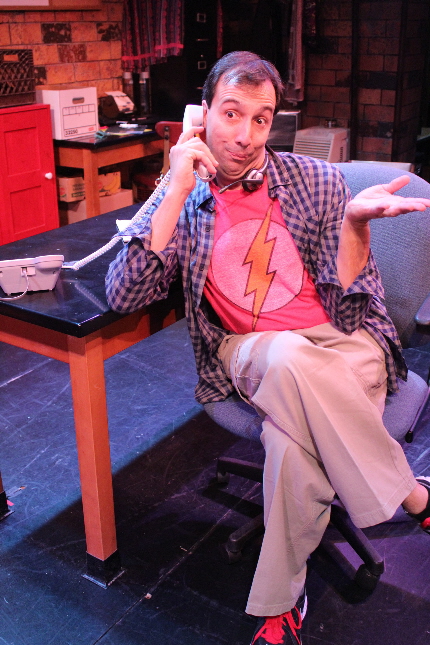 The smell of whatever was cooking on the small plates dinner theater menu at the Abdo New River Room inside the Broward Center for the Performing Arts added to the plot of this restaurant play even before the curtain went up (well, there really isn’t an actual curtain) on Fully Committed.

The one-man play by Becky Mode is about a restaurant reservations taker and struggling actor Sam Peliczowski (John Manzelli) at, what the program says is “Manhattan’s most trendy new restaurant – today, at least).

Committed is one of those “back of the house” stories. In restaurant terms, the back of house is the staff area where cooks and other support staff work and is usually not see by the public. You might not want to know or see the goings on of how your food is prepared. Fully committed is restaurant lingo for completely booked.

But food is not the main indulgence in this play; it’s about Sam, and the demanding patrons on the other end of the phone, and Sam’s self-important co-workers. They include the egocentric, coke-snorting celebrity Chef whose calendar Sam needs to keep — what time will Chef be picked up to be dropped off at the helipad, and when will his GPS arrive for his new Ferrari.

Mode’s play introduces 40 characters, which include the main character of Sam, and a host of others that basically test the patience of the hapless telephone answerer. Most of the characters are stereotyped caricatures — a Chinese caller with the requisite “Chinese” accent (or was it a Japanese caller with a requisite Japanese accent?), a Southern belle, a socialite appropriately named Bunny Vandervelde, a Middle Eastern sultan, and a Russian named Putin – yes, that Putin. But it’s a wise choice that Mode draws her characters this way in an effort to help her actor be able to switch from character to character in such short order.

Manzelli is onstage 90 frenetic minutes zipping from one phone line, to the red wall phone that is the line to and from the Chef, to an intercom upstage that connects Sam to the maitre’d and hostess desk. Manzelli mostly goes along with Mode’s stereotypes, but in some cases he goes deeper into the characters and is able to actually render some of the characters so that they have personalities.

Manzelli starts his Chef out, one of the best rendered characters, with a bit of celebrity bravado. Yet by the end of the play where Chef cowers over criticism over his Orange Roughy, the actor has taken us through a character who actually has had a dramatic arc.

Manzelli also has to perform the same feat with Sam, who is struggling in his own personal life (his aging father, a talent agent who keeps avoiding him, and a competitive best friend) amidst calls from the likes of a senior citizen complaining that the five-star restaurant didn’t give her an AARP discount, to making sure that a certain Ned Findley never gets through to make a reservation (it says so in large signs on the office back wall).

Some of the more complete characters in addition to the chef is Naomi Campbell’s personal assistant, Bryce, who wants the restaurant to serve a vegan meal for 15 (no soy, no dairy, no and no and no, which includes no to any female wait staff), and they’ll send over an assistant to change the harsh lighting and install their own light bulbs.

And the French maitre ‘d Jean-Claude who refuses to speak to the relentless caller Carol-Ann Rosenstein-Fishburn (who he says has a face like a dog). In a topical tip and heart-felt addition, Sam offers condolences to Jean-Claude about his home country of France (a nod to the recent Paris terror attacks). Nice touch.

Manzelli is at his best when he has time to draw out his characters. When he is forced to switch quickly from one character to another to another like a ping-pong game early in the play, the characters don’t seem to be distinct enough from each other. But this will probably get more succinct as the run continues.

While the characters are satirically fun in Mode’s play, the true magic is how it’s all done. Were the telephone rings computerized (more than 100 of them) or was there someone behind the scenes pushing buttons, etc.? My answer came from Production Stage Manager Natalie Tavares who said that the rings have to be done manually from the sound board — she does them — which is placed out in the audience in the rear of the room. There are too many human conditions of the play (cues, staging) that makes it, at this time, impossible for them to be computer generated. Tavares is also credited in the program with props. The Broward Center’s theatrical technician and tech wiz Ken Melvin is also credited with creating the cacophony of telephone rings.

Manzelli and Hugh M. Murphy directed the play, keeping the action centered, which lets the frantic energy of the characters speak for themselves rather than adding to the pandemonium, which was a wise choice.

Lighting design is by Preston Bircher, sound by Matt Corey, and set construction by Roger Predmore and Ben Loeb with scenic design by Sean McClelland that transports the Abdo New River Room to a New York basement.

The play itself lacks a bit of cohesiveness and is more a New York-centric satire that relies on the ability of its main actor to pull off the unbelievable feat of portraying some non-memorable and mostly zany characters. But Manzelli and company are fully committed: the production values are exceptional and the atmosphere of the Abdo New River Room is entirely cozy. There’s plenty here to create a satisfying theatrical experience.

Fully Committed runs through Feb. 1 in the Abdo New River Room at The Broward Center for the Performing Arts, 201 SW Fifth Ave., Fort Lauderdale. Tickets (954) 462-0222 or www.browardcenter.org. Runs 90 minutes without an intermission. Table service for small plates and drinks begins one hour prior to the performance. Tickets are $45 which does not include food, beverage or gratuity.

To read an in-depth interview with John Manzelli, click here.

This entry was posted in Performances, Reviews and tagged Broward Center for the Performing Arts, Fully Committed, John Manzelli. Bookmark the permalink.