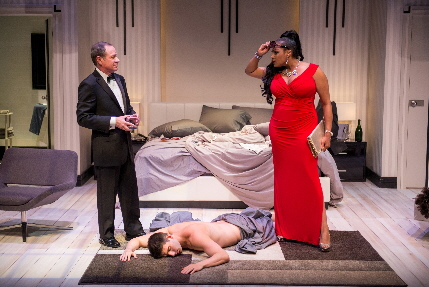 Death, drug overdose, murder, lies, hypocrisy, soulless creatures willing to do absolutely anything for greed and glamour – you really shouldn’t be laughing this much or this hard. But after all, it’s Hollywood.

It’s really not until the final scene that this sardonic farce stops cracking wise and McKeever bluntly forces you to think about just how far society has slid that these cartoon characters and their reprehensible actions seem plausible.

But until then, this is such a rollicking ride under Stuart Meltzer’s direction that even the actors were struggling not to crack up on opening night. Well, if they hadn’t been giving such pitch perfect comic performances, maybe they could have kept a straight face.

The lights come up on a quaking maid Estella staring at the well-turned nude body of a male hooker Travis, lying face down in the middle of the swankiest suite of the swankiest hotel, the Chateau Marmont, moments before the Golden Globes are set to begin a few blocks away.

The understandably nervous hotel manager Gage Holland arrives with the sleek smooth talent manager Hilly Hilliard. The room has been rented by Hilly’s top client, an aging action flick hero trying to resurrect his flagging career with a Globe-nominated supporting role in a serious picture.

From the outset, Hilly is cool and collected, vexed only by Holland’s loose cannon anxiety over a corpse. He literally and figuratively steps over the naked body as if it didn’t matter because, to him, it doesn’t. All that matters is covering up a problem that would destroy Hilly’s two decades of effort invested in Patrick Zane’s career, which will skyrocket if he wins tonight.

He tells Gage, “Listen Lambchop, dead hookers are the cornerstone on which this town was built.”

So Hilly calls in the fixer Morgan Wright, a statuesque diva who glides in dressed for the Golden Globes in a red carpet red gown, dripping jewelry and flashing an imperious displeasure for having been called away from sitting at a table in close proximity to Jon Hamm.

To Hilly and Morgan, this is just another day at the office, ordering up clandestine operatives to clean up the mess, but Gage is horrified as much by their blithe attitude as the naked body in a room where Clark Gable allegedly proposed to Carole Lombard.

GAGE: This hotel has a rich and illustrious history —
HILLY: Which, I’m sure, is filled with dead prostitutes. Who are you trying to kid with this? I mean, seriously, who hasn’t overdosed in this hotel?

HILLY: This is Hollywood, kiddo, no one wants reality. We live and breathe in a world of illusion. Unadulterated bullshit is what feeds the water that turns to steam that drives the turbine which makes this town run. Reality is just a word we put before “TV” to describe a type of programming that isn’t remotely real.

The humor is akin to a meld of Ken Ludwig’s broad farce and Joe Orton’s jet black social satire mercilessly skewering these barracudas happily swimming in a sea of tactile toxicity. As uproarious as McKeever’s script is with its steady parade of Dorothy Parker-dry witticisms, the whole thing is elevated by the uninhibited commitment by the terrific cast, the scores of funny business inserted by Meltzer and the precisely timed delivery of such exchanges as Gage saying Estella “wants to leave.” To which Hilly says, “Yes, and I want Brad Pitt to eat chocolate cake off my ass.”

On the other hand, some of the funniest bits rely on silence. McKeever playing Hilly watches mutely as Estella explains what happened at great, great length in rapid-fire Spanish. We know what’s coming, which makes it all the funnier. After a few moments of crucial silence, Gage asks Hilly, “Do you speak Spanish?” To which, Hilly, of course, says, no. Or another time when Gage drops an especially bizarre fillip into the recap that he forgot to mention earlier. McKeever’s Jack Benny silent slow burn reaction is priceless. McKeever is as funny in this comic role as he was moving in his current Carbonell-nominated turn in the Holocaust drama The Timekeepers.

Lela Elam brings a queenly but street smart mien to the ultra-practical fixer whose carefully coiffed appearance barely disguises the moral compass of a shark. Whenever someone or something complicates a situation, she flashes her eyes with a quick stare that would turn most onlookers to stone, she puts a hand on her hip and her lips drop into a contemptuous glare at protests citing such verities as love. Elam creates a glorious monster who is unashamedly immoral, not amoral.

For years, we’ve been trying vainly to explain or describe what Clay Cartland does specifically to make such hapless characters as the hotel manager so human and hilarious at the same time. As the resident straight man, he gets insufficient credit for the deft set-ups to others’ jokes and the pained reaction that makes him the only decent person in the room.

Vanessa Elise’s Estella happily satirizes and exploits stereotypes with a character who is, like everything else here, more than she appears. Among her talents maximized by Meltzer’s direction is a physical comedienne’s predilection for outsized operatic movement.

There is one character who makes a surprise entrance, turning everything upside down. The performer will have to forgive us not naming them to avoid a spoiler, but suffice it to say that their performance is as funny and competently executed as the others.

Meltzer paces the proceedings perfectly and while you can never know who contributed which ideas, we suspect it was his imagination that has Estella hide from the sight of the naked body by holding an insubstantial feather duster up to her face.

As always, Zoetic keeps upping the bar for set design and properties thanks to Robert F. Wolin’s stylish ultra-modern Hollywood glam bedroom with sex toys and other accoutrements found by Jodi Dellaventura.

Over the years, McKeever the playwright keeps evolving and maturing like any talented artist from Melt to Stuff to South Beach Babylon. But this one seems to be a skilled amalgam of all of his previous work. The droll humor grows out of social observation of everything from vanishing values to political correctness to stereotyping to changing attitudes about homosexuality.

From its inception, Hollywood has been a target for self-flagellation for novelists, playwrights and screenwriters, ranging from Day of the Locust to What Makes Sammy Run to The Big Knife to The Player. But all those visions of compromised ethics are chump change compared to the 21st Century of TMZ. What those works cited, but McKeever stresses, is the complicity of us the consumer in implicitly sanctioning these horrors.

This has been an outstanding season for Zoetic with the world premiere of Christopher Demos-Brown’s Fear Up Harsh and its first musical, Stephen Sondheim’s Assassins, so far. Now, they give us Clark Gable Slept Here, simply one of the funniest offerings on a South Florida stage all season, but its deeper themes should resurface the next time you turn on Keeping Up With The Kardashians.