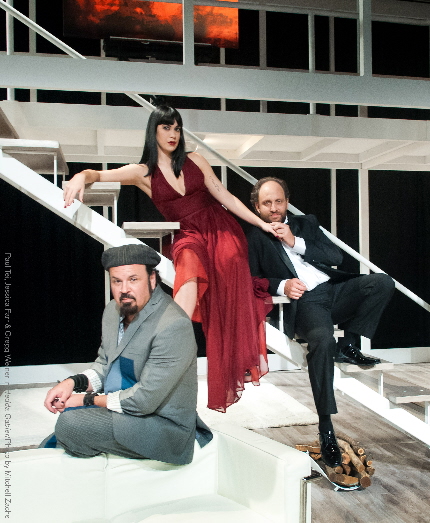 After a half-century of sympathetic portraits of a woman suffocating in a sexist societal straightjacket, MTC gives us a cool, manipulative, self-centered creature whose primary complaint is she’s bored.

Now reset in a contemporary post-feminist period, this intriguing and imaginative take has stripped out, intentionally or not, the social forces that molded Hedda into the victim that audiences have come to expect.

That and a thorough contemporization of the dialogue make this 19th Century warhorse accessible to a modern audience, even if Hedda is now more a fascinating villain than flawed heroine.

That lost facet aside, MTC’s engrossing undertaking features compelling performances, fine-grained direction and the impressive visual theatricality that MTC became famous for when it was known as The PlayGround Theatre mounting plays for student audiences.

Some theater colleagues privately razz MTC’s work process as unrealistic: one of the longest rehearsal periods in the state complete with acting games, exhaustive period research, an atypically healthy budget provided by generous donors and government grants, and a microscopically polished meld of stagecraft disciplines.

Scoff if you want, but the payoff is evident in what Artistic Director Stephanie Ansin, designer Fernando Calzadilla and their team have wrought: a thought-provoking reexamination that sets seamless acting in an intriguing theatrical environment.

For those playing hooky that day in high school, Ibsen’s 1891 play centers on Hedda, the daughter of a late aristocratic general, who once sowed some very wild oats with madman poet Eilert Lovborg. But she married the middle-class academic George Tesman because he could give her security and because the uber-dissolute Lovborg wasn’t the marrying kind.

Back from a honeymoon, Hedda immediately chafes with suffocating ennui in a new too-expensive home and begins to manipulate those around her for her amusement.

The licentious family friend Judge Brack and an open-hearted childhood classmate Thea Elvsted bring news. Lovborg has been on the wagon and has written a popular history with the adoring Elvsted’s inspiration and help. Worse, the rehabilitated Lovborg has penned a new visionary manuscript that will eclipse anything the plodding Tesman is writing. Thus begins the fatal collision of three intersecting love/lust triangles. Eventually, the world around Hedda turns to bottomless mire and then to ashes for all her plotting.

Ansin and Calzadilla have set this not in 19th Century Norway but in some contemporary world minus the technology. The new home that Tesman has bought to salve Hedda’s expensive taste is a riff on the sleek metal-and-leather of a Miami Modern home with two-story picture windows.

Ansin’s script is awash in modern vernacular because she felt the dialogue in every translation felt baroque. That’s distracting because Ibsen likely never wrote anything directly translatable to Ansin’s “Whatever” or “So you want to be the alpha dog?” On the other hand, the actors say the lines so smoothly (which was Ansin’s goal) that they sound natural.

She and Calzadilla use heightened theatricality even in this somewhat naturalistic play. There are moments when Hedda, surrounded by other people, is suddenly hit with a spotlight for a few seconds and we see her mask drop to expose the private wide-eyed terror or profound disgust that she really feels. They used the same technique, albeit more ham-handedly, in their production of Three Sisters last November.

But they take stylistic techniques one step too far with Luciano Stazzone’s techno score. Stazzone has been an integral collaborator in PlayGround’s previous sensory-stimulating productions. But here, the music undercuts taking the events seriously. For instance, portentous chords accompany the entry and exit of every character like a 19th Century melodrama.

But Ansin’s physical staging is textbook perfect. The way she places her characters on the set and moves them about are silent but clear indications of roiling relationships. Without drawing attention to it, her characters idly swing from stairway supports or sprawl on steps. Even where people sit on a sofa – hemming each other in or keeping their distance – is an intentional choice. Nothing is accidental, but nothing feels artificially forced.

The staging has some especially effective touches. (Plot spoiler alert) Lovborg bemoans the loss of his precious manuscript while bent over the very desk where Hedda has hidden it. Later, when Lovborg is driven to talk of suicide, Hedda heads toward that desk, saying she has something for him. But she doesn’t open the drawer with the manuscript, as we wonder for a split-second that she might do. She pulls open an adjacent drawer to give Lovborg one of her father’s dueling pistols.

Some of the actors outshine their previous work seen here. Jessica Farr, a playwright as well as an actress for Mad Cat Theatre Company, has never been better locally than in this courageous creation of an unlikable Hedda. Her Hedda is a caged panther prowling for meat, striking not so much out of malice as from the almost physiological need to dispel boredom.

She infuses acerbic lines with poorly disguised contempt while deigning to maintain the galling niceties of polite conversation. When she enters a room where the shades have been pulled back, she sneers, “Lovely. The maid has flooded us with sunshine” or asked if she will visit her dying aunt-in-law, she snaps, “I don’t do sickness or death” or telling her husband leaving for a party, “You can stay out as long as you like,” intimating to us if not him that he should stay as long as possible.

But Farr can unleash unalloyed emotion such as when she sobs in mourning over the future she can never have with Lovborg as she burns his manuscript. Only once does she go over the top, at the close of the first half when she cackles like The Wicked Witch of The West in triumph over Thea.

Tei has focused so much of his time as artistic director of Mad Cat that it’s easy to forget what vital, vibrant actor he is. His Eilert Lovborg is at first a former hedonist proudly clinging to his reformation and then an unhinged soul staring at an oblivion of his own making.

The discovery of the show is John Dennison who seems to have spent much of his career in community and small regional theaters. But his urbane, lupine and quite likely bisexual Judge Brack is a tuxedo-smooth voraciously carnal carnivore.

Local stalwart Gregg Weiner has the thankless role of Tesman, although he and Ansin don’t make him a worthless fop that Hedda would never have married, as he is often played. Weiner makes a perfectly convincing fella next door who loves his glamorous and demanding wife.

Diana Garle, who was Irina in Three Sisters, creates a Thea who chastely idolizes Lovborg. Garle’s achievement is preventing Thea from being a naïve risibly cloying goody two shoes. Instead she is simply a pure-hearted soul. Nods as well for Kate Young whose invests Aunt Juliana with a decency that cannot be mocked, especially when she speaks about the privilege it is to nurse ailing human beings. Kitt Marsh also makes a fine maid unenamored of the woman who has attached herself to George she helped raise.

To read a story about the making of the show, click here.