Million Dollar Quartet Has A Whole Of Shakin ‘ Goin’ On 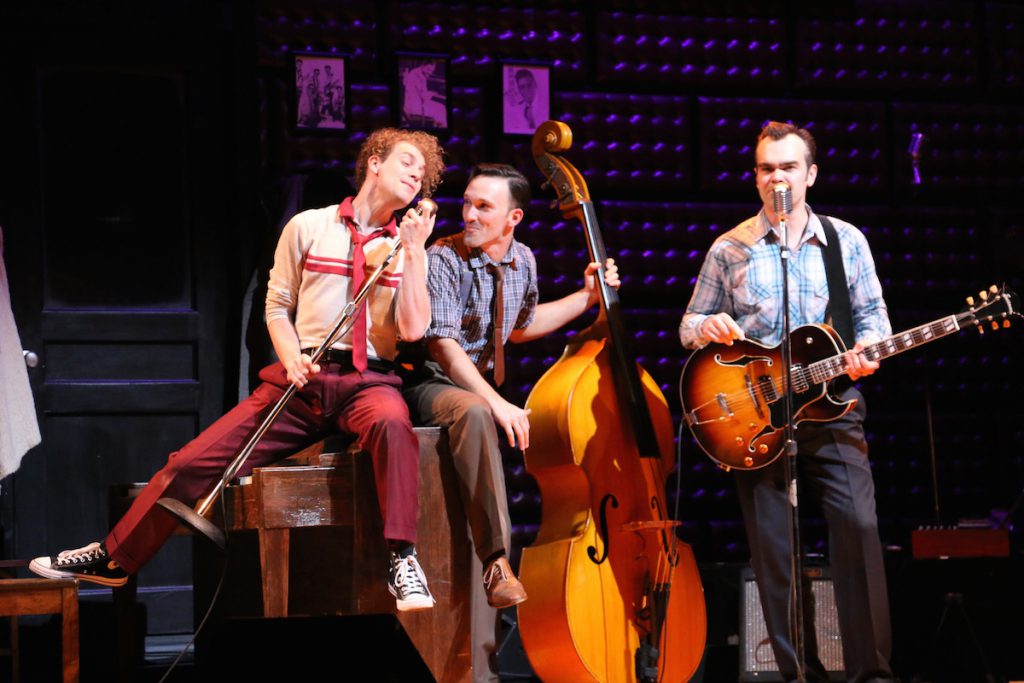 VERO BEACH – They may not look like their counterparts, but they sure sound like them. They’ve got the moves, the stylings and so much rock ‘n roll energy you’ll feel like you’re at a concert rather than the theater.

Indeed, whether it’s tribute or jukebox, the musical Million Dollar Quartet at Riverside Theatre in Vero Beach is sure to entertain.

Indeed, you’ll have to fight the urge to sing along or maybe even stand up and dance. But pace yourself. This is just the beginning of an imagined recreation of a legendary evening.

The actual event happened on a December evening in 1956 when these four young rock ‘n rollers, destined to become legends, found themselves meeting with their mentor, Sam Phillips, at Sun Records in Memphis. It was Phillips who had seen the greatness in each of them and who had encouraged each one to find the uniqueness in their own voice and experience.

Riverside’s tightly crafted production depends on talent that can deliver the goods. And that is found in its remarkable cast.

Both James Barry, who plays rockabilly great Carl Perkins, and Scott Moreau, who plays Johnny Cash, were in national tours of the Tony Award-winning Broadway production.

Barry, who is also the production’s musical director, carves out some fine Perkins-esque stylings and makes the electric guitar sing. Listen to the seductive whine he gets into that thing in the “Fever” number, sung with fabulous allure by Sarah Ellis, another fine talent who toured in A Gentleman’s Guide to Love and Murder.

Moreau, who performed in the show five years ago at the Bob Carr in Orlando, is strong and in deep, rich voice while making it all look so easy, especially in “I Walk the Line” and “Riders in the Sky.”

While Sam Cieri, who was in the national tour of Once, looks more like a character from A Bronx Tale: The Musical, he sure serves up Elvis’ gyrations and nails the sound in “That’s Alright” and “Hound Dog.”

But oh my….here comes Nat Zegree as Jerry Lee Lewis. As in previous productions, from Broadway to national tours, this character and the performer inhabiting him, steal the show. In fact, the reason the show can be called “Tony Award-winning” is because Levi Kreis won best featured actor in a musical for his performance as Jerry Lee Lewis.

And that’s the way it should be because Mr. Lewis was a bundle of untamed energy and so is Mr. Zegree, a regular performer at New York’s 54Below and Joe’s Pub. The musician basically has his way with the piano, pounding on it with his hands, his feet and his backside. The piano music drives on, with gleeful relentlessness, as the musician bounds over the piano, beside it, jumping into place in front of a microphone, into someone else’s business and squarely into the hearts of the audience.

Of course, keeping all these big talents in line is Sun Records owner Sam Phillips, the man who became like a father to the four country boys and setting them on the path to stardom. But this night, he accepts that ultimate parental truth: He has to let them go so they can fly. After all, at this point, they are all in their early 20s and are in hot demand by Columbia and RCA.

Holding this dramatic line as Phillips is Jason Loughlin, who made such a smart Elyot Chase last season in Riverside’s production of Private Lives, and, who appeared onstage with Helen Mirren as the queen’s Footman in the Broadway production of The Audience. Here, Loughlin brings a sympathetic portrayal of Phillips to the stage, but also brings out a surprise – a mean harmonica.

Unfortunately, the expositional moments don’t rise above serviceable and, except for Loughlin and Zegree, the unnatural challenges the cast. But librettists Colin Escott and Floyd Mutrux do what they need to do – state the facts, ma’am, then move out of the way of the music.

And that’s what this show is about, from beginning to its spectacular ending – American music that will open doors into memory and fun.