Posted on December 9, 2022 by Bill Hirschman

That every one of the heroes and heroines in The 25th Annual Putnam County Spelling Bee is a misfit we secretly recognize from the bathroom mirror explains how this musical has thrived for 17 years off-Broadway, on Broadway, in London, Oslo, Seoul and likely half the regional theaters in the United States.

Add to the roster of successful productions, MNM Theatre Company’s accumulation of shy, arrogant, brilliant, not-so-brilliant youngsters trying to find their self-worth amid the comically high-pressure competition of a classic spelling bee finals.

There’s Olive Ostrovsky (Mikayla Cohen), the shy daughter of a neglectful father whose love of words presages a likely future as etymologist.

Logainne “Schwartzy” SchwartzandGrubenierre (Leah Sessa) is the daughter of two overbearing gay dads as well as head of the school’s Gay-Straight Alliance. Marcy Park, (Jen Chia doing the role a second time in her career) is an over-achieving genius who is beginning to tire of winning.

Ultra-nerdy Leaf Coneybear (Geoffrey Mergele) dresses in a homemade superhero cape and lucked into a slot. Boy Scout Chip Tolentino (Michael Harper) is last year’s winner who struggling with the physical manifestation of puberty. William Barfee (Michael Materdomini) has an arrogance masking insecurity and who spells out the word with his foot before verbalizing it.

Overseeing it is contest coordinator Rona Peritti (Jinon Deeb), a realtor who won the competition in her youth in what may have been the highlight of her life; Douglas Panch (Troy J. Stanley), a vice principal returning after a five-year absence due to “an incident,” and “comfort counselor” Mitch Mahoney (James White III), a street kid helping out as part of his court-ordered community service.

As always, plucky members of the audience are drafted into coming on stage and competing.

The cast makes the most of William Finn’s wry and witty score and Rachel Sheinkin’s painfully insightful script. Per the authors’ encouragement, the show is sprinkled with updated lines and references, such as a nod to Taylor Swift’s Ticketmaster problem and noting that “This Bee is nosediving faster than Kanye West’s career.”

The entire adult cast fearlessly dive into these personalities and each has a fine voice that imbues each song with distinct characters. 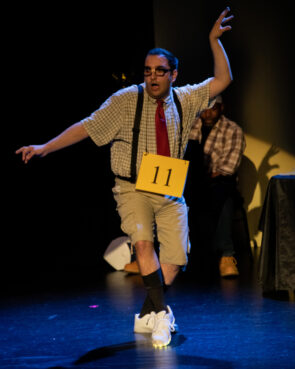 A special shout out to Materdomini who disappears physically into Barfee with impossibly hunched over shoulders and limbs scattering in all directions, plus having a sandpaper voice. But in a very few moments where the show allows, we hear the actor’s true baritone that ought to be used in some other title.

Veteran director of musicals Jonathan Van Dyke stages the ensuing competition with entertaining verve and quiet compassion for every contestant as they discovers aspects of themselves.

MNM follows through in its long-standing commitment to hiring a live band, this one headed by musical director Eric Alsford.