Posted on December 8, 2022 by Bill Hirschman 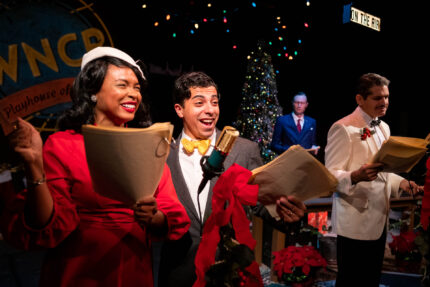 In the world of 21st Century writers, the adjective “merry” has fallen out of frequent use except in conjunction with a certain holiday. But “merry” is precisely the right word to describe the holiday brew of warmth and humor in New City Players’ smile of a production in It’s A Wonderful Life.

While it is staged as a radio play, this production involves three-dimensional acting by five real-life performers inhabiting five 1930s radio actors with distinct personalities (and off-stage relationships) who in turn portray the 50 or so characters they inhabit. Yes, 50.

The script by Joe Landry not only follows the beloved 1946 film, but mixes in goings on inside the radio station – and wisely inserts some scenes and dialogue that fills holes you don’t notice in the Frank Capra film’s narrative.  The “WNCP Radio in Fort Lauderdale” broadcast is both jocular and true to the themes of the ideas of community, friendship, sacrificed dreams and the importance of every single person.

And under it all are unnerving echoes with today: the pursuit of dreams taking a left turn as ordinary people wrestle with a struggling economy.

Live presentations of radio plays have been done locally before. But what director Timothy Mark Davis brings out of his of impossibly nimble vocal chameleons is full-out performances – mostly comic but also touching at times. Although scripts are in their hands as they would be in a radio performance, no one is simply reading lines. For example, in the famous finale, Caroline Dopson playing one of the children allows her lower lip to tremble – an inspired touch that affects the live audience, but would be lost on the radio listeners.

They slip in an out of their roles instantaneously like liquid mercury with a seeming effortlessness that belies a lot of rehearsal.

They scurry around each other in the small studio to two tables behind them overflowing with a strange array of objects that they will use to create literally hundreds of sound effects, from the classic small door used for slamming portals, to a brush that sounds like a train sliding into a station, to a belt snapped exactly when one character punches another, to a kazoo echoing a revving car engine.

While each actor must deliver distinctly different voices for a dozen creatures (Carlos Alayeto has Uncle Billy and Mr. Potter arguing with each other), no one skimps on the creative imagination by trying to imitate the voices from the classic film.

Marcos Fuentes gives the radio play its focus as an eminently likable George Bailey. Although he plays few others characters, he is constantly racing back to the sound effects tables augmenting his colleagues’ scenes.

Alayeto, with slicked-back hair, a white tux and a mellifluous voice, is also the show’s announcer and a half-dozen other folks.  Noah Levine, a welcome sight, is back again as the woebegone angel in training Clarence. Marlo Rodriguez provides George the kind of stalwart supportive Mary any man could fall in love with. Dopson’s many roles include Josephine who assigns Clarence to his challenge. Assistant Stage Manager Amanda Gomes also joins in on the singing commercials.

This review has waited criminally to give credit to the unseen magician at work: sound and foley designer Tyler Johnson Grimes. Civilian audiences won’t notice, but professionals will acknowledge that his work here deserves the Carbonell Award for sound right now. It’s not just the countless sound effects that aren’t delivered by the cast, it’s not just the array of mood-setting period music for scene changes and then subtly turning into non-stop underscoring as the tone of the story darkens, so add in the precise timing including a moment when a lengthy unbroken musical underpinning syncs perfectly with a key turning point on stage.

New City Players has earned a reputation for quality productions, numerous events exemplifying its priority of connecting with the community and an overall approach to theater that is reverent but with a twinkle in their artistic eye. In this case, a sign outside the theater welcomes the audience to Bedford Falls. Hot cocoa and snacks are served 15 minutes before every performance. The hall at the rented theater at Island City Stage is decked with holiday decorations, poinsettias and banners. Lyrics to some of the songs like “Let It Snow” are handed to the audience in hopes they will sing along.

It’s an invitation to make merry.

Always seeking outside events associated with a production, the company is sponsoring a free showing of the 1946 film Dec. 22 at the Pompano Beach Cultural Center with a post -show discussion with Davis; Rodriguez; Christopher Robe, a film scholar, and Marsha Brown, a mental health professional.