One of the yin & yang benefits of being a voracious theatergoer is that you get to/have to see a lot of shows multiple times. The downside is sitting through yet another photocopy edition of the same material.

But the delightful upside, as illustrated in MNM Theatre Company and North End Theater Co.’s Sister Act, is that a work that you may not have taken to the first time or two can surprise you when a company invests freshness, energy and skill. You see it as if it were the first time.

So, no, the musical Sister Act isn’t Sondheim, Webber or Jerry Herman. But led by director Michael Ursua and music director Anthony Campisi, you get an effervescent cast having a great time, a kick-butt band and a committed support team delivering an inarguably entertaining romp worth the visit.

The 2006 musical comedy is based on the 1998 film about Deloris Van Cartier, an aspiring pop singer and gangster’s girlfriend whom police hide in a Philadelphia convent after she witnesses a mob murder on Christmas Eve 1977. The collision of a cynical streetwise denizen and the devout believers taking refuge in their faith is the source of both character-driven comedy and some subtly delivered issues about how two anti-ethical outlooks can learn from each other in order to survive in the future.

Among the challenges: Deloris is charged with teaching the tone-deaf choir to sing in a way that won’t hurt the ears of nearby animals, and declining attendance at services has the diocese threatening to close the church and convent.

By the end, the sisters have learned about life in the hood and Deloris the loner has learned the virtues of sisterhood. 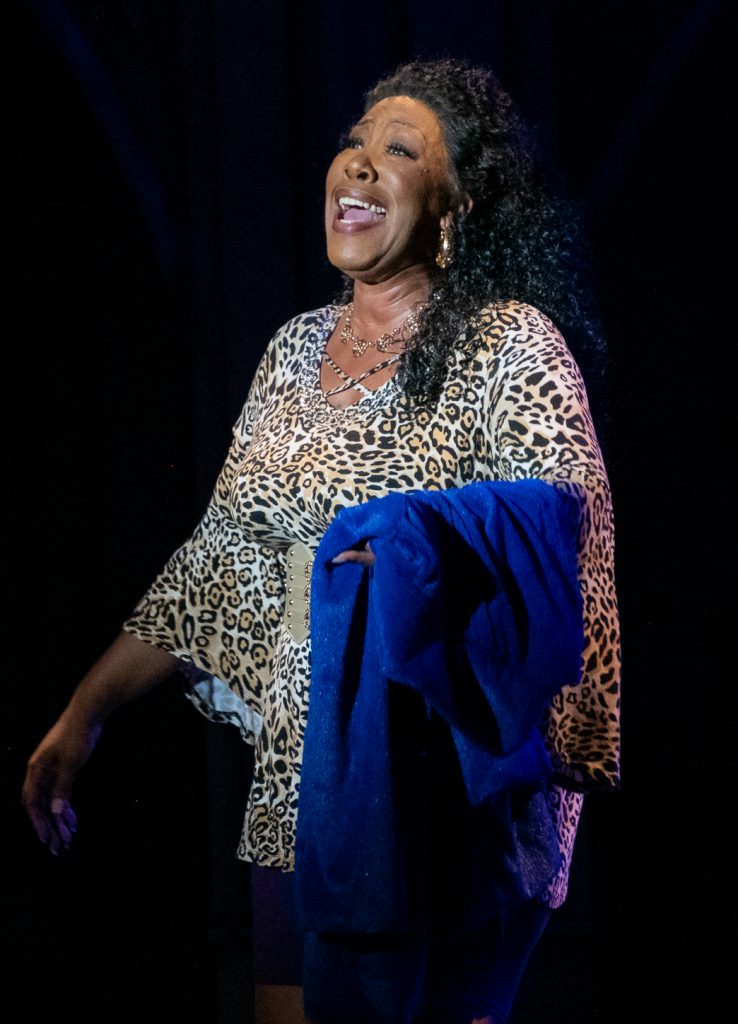 The somewhat funny, somewhat heart-warming film relied heavily on the unique talents of Whoopi Goldberg at the height of her powers as the heroine, Delois Van Cartier (née Delores Carter). Wisely, most succeeding actresses seeking a showcase have not tried to imitate Goldberg. Here, Vallery Valentine with her own style and verve provides a strong center to the story with a clarion voice that seemingly needs no amplification.

She is beautifully counter-balanced by Dalia Aleman as the crusty Mother Superior, a strict but fervent believer in the tenets of Christianity in a world that is seemingly descending into chaos, and who has a quick wicked sense of humor.

DELOIS: Is there a smoking section?
MOTHER: Yes, and you are headed for it

But the strength of the non-Goldberg outing is the music by Alan Mencken (The Little Mermaid, Beauty and the Beast and a score of other shows) who, just as he did in Little Shop of Horrors, produces a loving pastiche of music echoing a particular period. This time its late ’70s musical styles from R&B to soul to disco to funk to Motown to Barry White and everything else you’d find on an AM radio station of the period. The lyrics by Glenn Slater (Mermaid, School of Rock and, for his sins, Love Never Dies) range from mundane to hilariously inventive. To wit, the Act 2 opening production number has the nuns appearing in glammed up habits and rocking to the disco beat of “Sunday Morning Fever.”

But Mencken has also penned impressive hymn-like vocal numbers for the choir and later infuses them with a distinct disco sensibility. The results are an audience-winning wall of sound fusing the two genres.

The music and lyrics are melded into an occasionally witty if not very memorable script by Bill and Cheri Steinkellner (TV’s Cheers) and pumped up with additional material by Douglas Carter Beane (The Little Dog Laughed and As Bees in Honey Drown). There are some hilarious moments, though, notably when Deloris is backed into saying grace with prompting from Mother Superior.

In several cases, an up-tempo number with words praising the Lord and the desire to serve him intentionally echo a lover offering sexual favors, such as “Take Me To Heaven.”

A favorite example of the three elements fusing together is when the mobster (with his three goons singing backup) croons “When I Find My Baby” a lush Motown number complete with Temptations choreography, except the affectionate lyrics include:
Ain’t gonna let that girl get away!
No way!
And when I find that girl,
I’m gonna kill that girl!
I’m gonna wham! Bam! Blam!
And drill that girl!
Won’t rest until that girl
is safe and sound six feet below – no!

The predictable plot begins to sag in the last quarter of the evening and the show has a few weak spots until, as expected, everyone joins together for a rousing roof-raising finale with sparkling purple habits. Almost everybody gets a character-revealing solo number unnecessary to advancing the narrative.

Ariela Pizza is the young shy postulant who Deloris opens up and she nails the big number late in the show, “The Life I’ve Never Led” as she questions whether to pursue a nun’s path. Don Jose (aka Don Juan Seward II) brings to mobster Curtis Jackson that impressive baritone-bass he used when playing Coalhouse Walker in Actors’ Playhouse’s Ragtime. James White III is the wimpy cop still nursing a crush on Deloris from high school and now has to protect her.

The script does create a large number of parts of nuns with distinct personalities (well, usually defined by a single adjective) and gifts them to a phalanx of South Florida actresses you’ve seen in a score of lead and supporting parts in other musicals. They return the favor by throwing themselves completely into the opportunity. They include: Heather Simsay, Colleen Pagano, JaVonda Carter, Meg Frost, Casey Sacco, Elissa D. Solomon, Francine Birns, Nia Bourne, Karen Hagerty Cohen, Kate Delaney, Alexandra Dow, Elizabeth Sackett and Gabriella Saramago plus Bill Brewer as the monsignor.

Filling out the company are Allan Napier, Josh Roland-Bramkamp and Charlie Alguera as Curtis’ nerdy hoods who sing the completely irrelevant but comical “Lady in the Long Black Dress” in which they tout their debatable sexual attraction that they are sure will convince the ladies in their habits to betray Delois.

Many local companies will sometimes use pre-recorded digital tracks for the music when the scope and breadth of the score demands it. But MNM has always insisted on a live band with some of the best session players in the region. This time Campsisi on keyboards leads a superb band including Rick Kissinger, reeds; Tim Kuchta, drums; Chase Maddox, guitars; Karen Nagy, keyboards; Jason Pyle, trombone; Roger Unana, trumpet and Rupert Ziawinski, bass. Their virtuosity is a major plus in recreating Mencken’s resurrection of the period’s sound.

The technical staff deserves some paeans as well. The set designed by Cindi Taylor and executed by a team led by J.B. Green and Jordon Armstrong is dominated by 2 ½-story tall arches, a circular stained-glass window and large choir loft. The costumes by Penny Williams includes embarrassingly period perfect outfits they must have stolen from the very back of your closet. Clifford Spulock’s lighting underscores the sanctity of the church settings and the joy inherent in the production numbers.

As has happened several times before at this venue, microphones seem to turn on after actors have spoken a few words and some actors at the center of a scene are not lit. Some of this will likely improve at future performances.

The evening has a feeling of polish in part because of Ursua’s assured fluid staging, the second time he has directed it; Campisi’s martini smooth melding of the voices both secular and divine, and Alex Jorth’s fine choreography of nuns cavorting to a disco beat and homeless transients providing terpsichorean backup to a policeman’s daydream number.

Sister Act will run through March 6 at the Lauderhill Performing Arts Center, 3800 NW 11th Place, in the Central Broward Regional Park on the Northeast corner of Sunrise Boulevard and State Road 7. Running time is two hours 10 minutes with a 15-minute intermission.  Performances are 2 p.m. Wednesday, Saturday, & Sunday; 7:30 p.m. Thursday-Saturday. Tickets are $45 to $65 and are available online at www.lpacfl.com or by calling 954-777-2055.