Posted on December 7, 2011 by Bill Hirschman 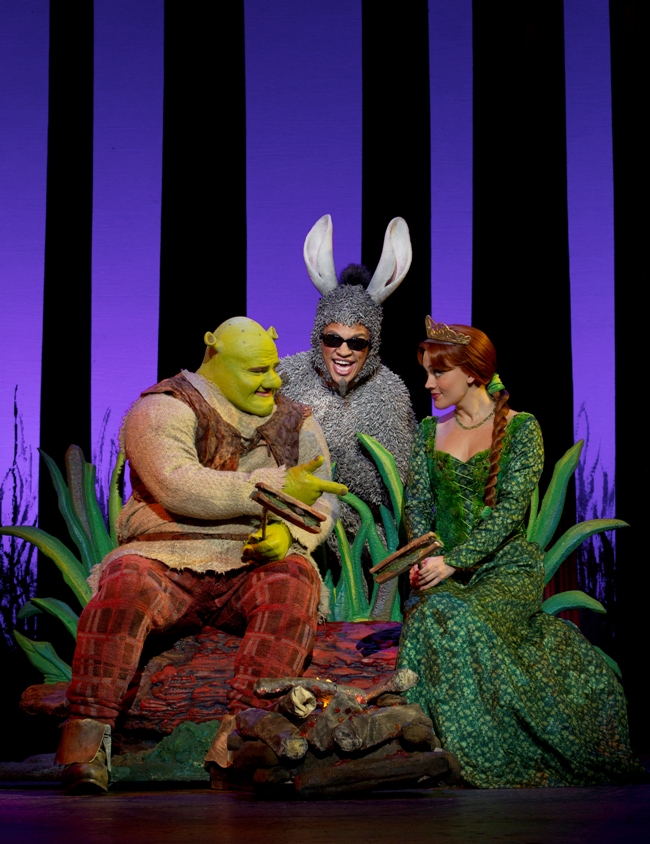 Don’t go looking for the sassy charming movie Shrek in its musical incarnation now appearing in the Broadway Across Miami tour at the Arsht Center for one week only.

Streaks of imagination and wit surface frequently, but this generally unengaging mediocrity misses the effortless irreverence in Dreamworks’ animated romance between a large green ogre and a beautiful princess.

So, yes, if you can’t laugh at a farting and belching contest in the middle of a courting scene, you have a stick stuck somewhere it shouldn’t be. And you have to admire whoever thought up a fairy tale character cursing at another character calling them a “Mother Hubbard.” As many have noted before, it’s not a bad show.

But this fairy tale theoretically designed to enchant children and tickle adults doesn’t cast much of a magic spell because the creators simply haven’t found the winking subversive alchemy that was innately part of the 2001 romp. Here, even the nose-thumbing jokes seem as calculated as a Disney theme park ride.

For instance, both share morals about self-esteem and not judging people by their appearances. But the movie makers, not wanting to get caught being serious, slid the messages at you with a bit of subtlety and wit; the musical slams you with them head-on in song and speech.

David Lindsay-Abaire’s script follows the plot of the film pretty well. Shrek is a grumpy chartreuse-tinged ogre the size of three fullbacks who is a social outcast and lives in a swamp to avoid people. When a parade of familiar fairy tale characters are evicted from a nearby kingdom and take up residence in his swamp, he goes to the dwarfish jerk Lord Farquaad for redress. The princeling assigns Shrek and his wise-cracking sidekick, Donkey, to rescue a prospective bride, Princess Fiona, from a tower guarded by a fire-breathing dragon. On the trip back to castle, a prickly affection blooms and complications ensue.

One of the real problems with the show is its score by Jeanine Tesori, the unassailably talented composer of Violet and Caroline, Or Change. She could not be a worse fit for the material. Tesori writes art songs that make you think, exemplified by a stubborn aversion to staying in anything resembling the same tempo, key, rhythm or meter for more than four bars of music. That’s fine when a show aims to force the audience to think deeply, but not for one that is essentially a mindless goofy spoof. There isn’t a single infectious number as compared to the Andrew Lloyd Webber’s viral score up at the Maltz’s production of Joseph and the Amazing Technicolor Dreamcoat.  Even a gospel-tinged number, “Freak Flag,” never quite raises the roof because Tesori never lets it fly. Underlining its shortcomings, the show finally lets loose, ironically, in the curtain call number taken from the film: The Monkees’ joyous rock frippery “I’m A Believer” written by Neil Diamond.

It was also hard to know opening night whether large sections of the score were totally absent melody or whether the sound board allowed the orchestra underscoring to drown out the singers’ melody line. Half the lyrics by Lindsay-Abaire were unintelligible. While there was a nine-member pit band, the playbill cited in tiny print on page 32: “Orchestral enhancements by HalfPint Studios, Jason Howland.”

You also sort of have to ask why they bothered musicalizing the movie when they really have not added or even enhanced or deepened the experience. Well, one reason is the film producer Dreamworks wanted to try its hand like Disney at exploiting Broadway as an additional revenue stream for beloved material just sitting around waiting for its second, third and fourth sequel. Dead give away is a totally expendable numbers like “Travel Song.”

You can’t fault the energy or singing ability of the cast, especially Liz Shivener as the spunky Princess Fiona (although she lacks her cinematic avatar’s independence) and Merritt David Jabes as the dwarfish villain Lord Farquaad (the actor gleefully dances on his knees while hiding behind tiny fake legs). Lukas Poost is adequate as our hapless hero but he doesn’t have the film Shrek’s rare mix of lovability and curmudgeonability. He had it in the opening scene, but it evaporated soon after.

As far as André Jordan as Donkey: My seatmate claims that Eddie Murphy’s donkey was a bit fey in the film. I don’t remember that, but I know damn well the character was not as flamboyant as the one in this production. Was this a laudable attempt to say that we should not judge people by their sexuality? If so, it didn’t work.

And yet, every time you’re ready to give up on the show, something happened in the staging to make you giggle or guffaw. The princess decides to lead the Pied Piper’s rats in a dance number. Initially, the rats are slippers on the dancers’ feet seen just below the edge of the curtain that has been raised a couple of feet. Very cute and imaginative.

Lindsay-Abaire, playwright of Rabbit Hole, has filled the script and his lyrics with scores of cute Broadway meta-references such as having the rebellion of the fairy tale characters culminate with someone at the back of the mob wave a huge flag a la Les Misérables. He and Tesori also drop in nods to The Lion King, West Side Story, Gypsy and Dreamgirls. Lindsay-Abaire loves throwaway lines like, riffing on the last line in the movie, Babe, Shrek says to his buddy, “That’ll do, donkey.”

The most inspired part of the production is its use of puppetry based on scenic designer Tim Hatley’s vision. There’s a wise-cracking gingerbread man barely a yard tall plastered to a pan, a cow jumping over a moon and above all, a spectacular War Horse-type creation of a huge female dragon who flies over the other actors, plops to her haunches, bats her eyes and curls her tail.  Her design and her operation by black-clad puppeteers is the highlight of the show. She also gets one of the best numbers, “Forever,” belted out into a mike somewhere by the glorious voice of Kelly Teal Goyette.

Like Beauty and the Beast last month at the Broward Center, producer NETworks is perfecting a paradigm in which they fine-tune the content of the Broadway version before taking it out on the road, hire very talented if non-Equity casts and spend their money on cast size, sets and costumes so that audiences don’t feel they’re seeing a stripped-down version. 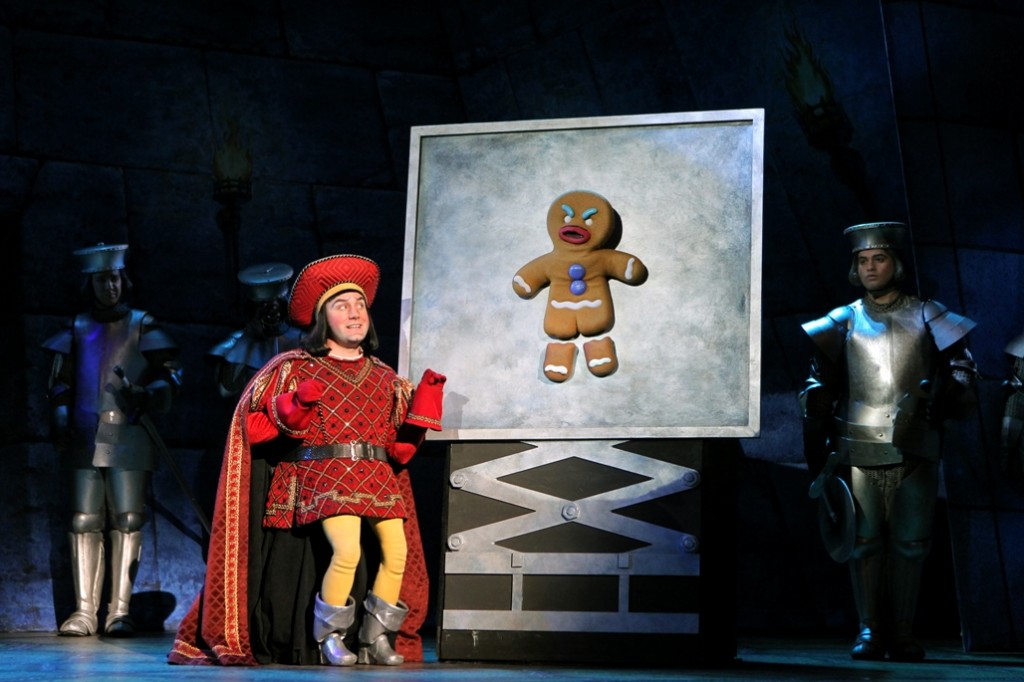