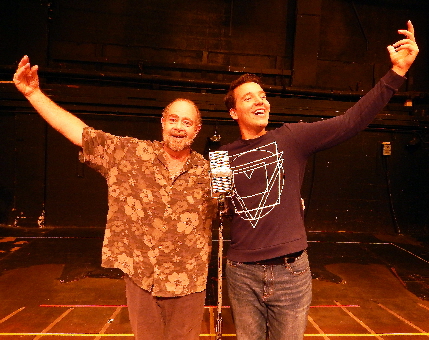 The title of the musical playing at Broward Stage Door is bittersweet, indeed. At a recent Sunday matinee of Breaking Up Is Hard To Do, Derelle W. Bunn, co-founder and executive producer of the theater company told audiences this will be the last show in its Margate location, an abandoned movie house that Stage Door has called its home since 1995.

Not that this was breaking news, however. In January, Stage Door announced they were moving to the Lauderhill Performing Arts Center, and would begin their season in September there.

Breaking Up is the perfect swan song to close this chapter of the Stage Door as it gets ready for its new home. In some ways, the jukebox musical, originally produced at the Capital Rep Theater in Albany, N.Y., in the summer of 2005, and which has gone on to be performed in regional theaters, has much of the same vibe and energy as the productions that associate director Kevin Black has been creating for Stage Door. His are those light and airy musical revues, such as the 2017 Tickling the Ivories, featuring songs made famous by pianists from Mozart to Manilow, and this season’s Imagine: A Beatles Celebration, which highlight recognizable tunes so relatable to audiences.

Breaking Up, however, hangs a plot or two around 18 of the songs by 1960s pop icon Neil Sedaka, unlike the previously mentioned shows.

The story serves as more than window dressing for the songs. It’s a thin script, but it is as fun as it is flimsy. Sedaka was a consultant on the book by Erik Jackson and Ben H. Winters, and it is loosely inspired by his own experiences performing at a hotel in the Catskills. His wife of nearly 50 years, Leba, was 16 when the 19-year-old Sedaka met her at the hotel that her mother owned in the Borscht Belt.

At the fictional Esther’s Paradise, comedian Harvey Feldman (Michael H. Small) is delivering Henny Youngman-esque one-liners. “I’m so old I remember when the Dead Sea was just sick,” he cracks. He’s a regular for those vacationing at Esther’s, owned by Esther Simowitz (Gail Byer), who had to take over the resort after her husband died after choking on a semi-sour pickle. “God, rest his soul” is the callback each time the deceased spouse is referenced.

Former cabana boy Del Delmonico (Bruno Faria) is now the headline act, performing original songs (there’s a twist in the plot of who is really responsible for the tuners), and making the ladies swoon.

There’s also cause for crisis when a telegram arrives to tell Esther that there’s a producer arriving from American Bandstand to check out Delmonico, which puts the Paradise into a tailspin. Esther needs $8,000 to make necessary repairs for nerdy handyman Gabe Green (Trenton Bainbridge), who does double duty as the Paradise stage manager.

Adding to the mayhem are two best friends who arrive from Brooklyn. Marge Gelman (Molly Anne Ross), who is on the fast track to becoming one of the first female dentists to graduate from Columbia, has been left at the altar. Her bestie, Lois Warner (Leigh Green) is an aspiring singer, and is accompanying Marge on what should have been her honeymoon.

The down-in-the-dumps almost-bride plotline leaves plenty of room for the title song Breaking Up Is Hard To Do, Sedaka’s 1962 hit, Where The Boys Are (1961 recorded by Connie Francis), Lonely Night (1975), and Stupid Cupid (also recorded by Francis, but in 1958) in the first act.

Audience participation ensues for Happy Birthday, Sweet Sixteen as a patron is plucked out of the audience to get a birthday song and card, delivered by Del and Harvey.

Comedian Harvey turns a bit serious for King of Clowns in Scene Six, and Small delivers the song with a cantoresque reverence.  Then it’s the classic Oh, Carol (Sedaka wrote this song for pal Carole King in 1959), and an Act 1 finale, that blends a medley of tunes.

Act II finds the gang settled in with Harvey and Esther realizing that maybe it isn’t too late in life to find love, Del courting Marge after Lois tells her the girl’s father can help him make it in the music business, and Gabe secretly swooning for Marge, all the while cueing up more of Sedaka’s melodies, Calendar Girl, Next Door To An Angel, Solitaire, Laughter In the Rain, My Friend, Stairway To Heaven/Little Devil, and Love Will Keep Us Together as the big finish.

There isn’t a weak link in the bunch in this tight ensemble cast, plus the high energy choreography and direction by Jonathan Van Dyke, keeps everything moving along in perfect harmony. Stand outs are Bainbridge, whose voice is angelic and sings the show’s highlight, Laughter in the Rain. Green’s comic timing is delightful and she steals many a scene as Lois. But each actor has their own shining moments, and it’s what makes this show so easy to watch.

It’s nice to hear a live band at Stage Door, which many times relies on pre-recorded tracks to accompany vocals. The musical director is Caryl Fantel, with the boys in the band: Paul Reekie on piano, Sandy Poltarack on guitar and bass, and Roy Fantel and Tim Kuchta splitting the run on drums and percussion (Kuchta fills in from July 25 until the show’s close.)

Breaking Up Is Hard To Do has shades of the movie hit Dirty Dancing set in the same period in the Catskills. Many of Stage Door’s audience members were chattering on the way out of the theater after the show, reminiscing of personal experiences at places like Esther’s (Grossinger’s was the memory). They remembered those memories brought to life by Sedaka’s tunes in a purely delightful Stage Door production that has plenty of sing-along hits, and lots of heart.

Breaking Up Is Hard To Do runs through Aug. 12 at the Stage Door Theatre, 8036 W. Sample Road, Margate. Performances 8 p.m. Friday-Saturday, 2 p.m. Wednesday and Saturday-Sunday. Runs 120 minutes with 15-minute intermission. Tickets are $48. For tickets and information, call 954-344-7765 or www.StageDoorFl.org.