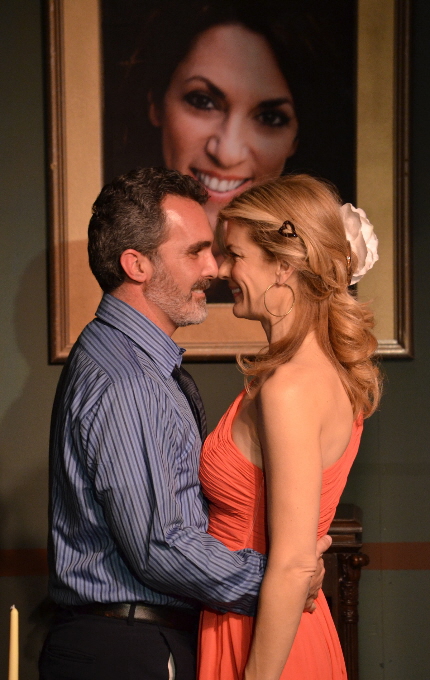 Chapter Two may be the ultimate play about bringing baggage to a relationship.  If it’s tough when some dates drone on about their last marriage with “that abusive jerk” who dumped them, imagine how a potential romantic partner can compete with the memory of a beloved spouse who died prematurely?

Director Michael Leeds and a solid cast at the Plaza Theatre in Manalapan have mastered Neil Simon’s challenging meld of witty comedy and throat-choking heartache, and make both perfectly plausible facets of life.

Chapter Two is almost uncomfortably autobiographical, which invests it with the imprimatur of credibility. It fictionalizes Simon’s struggles to create a new life with the actress Marsha Mason after the death from cancer of his adored wife Joan.

But along with Lost In Yonkers, the 1977 romantic comedy ranks among Simon’s best because it depicts the war between head and heart while honoring both in an adult manner.

George (the note perfect Wayne LeGette) is a novelist not coping very well with paralyzing grief over the death of his wife. (A side note we can’t resist: the large portrait of his wife in his living room is actually LeGette’s ex-wife, actress Stacy Schwartz). His brother Leo (the always dependable Kenneth Kay) is a theater publicist who has been trying to jumpstart George’s life with blind dates. Across Manhattan, Jennie (a lovely Mia Matthews) is a soap opera actress limping after divorcing an abusive husband. She, in turn, has fellow actress Faye (Kim Cozort) kvetching at her to get back into the dating scene.

A chance meeting leads the two friends to match up our hero and heroine who have absolutely no desire to risk their damaged psyches. But in one of the cutest of “cute meets” ever imagined, the two do connect after gingerly sidestepping landmines with clever wordplay. These attractive charming people fall in love and become engaged within two weeks.

But despite romantic lightning striking twice, George cannot shake the loss of his wife — not the ghost of his wife’s memory so much as the emotion-cauterizing trauma itself. Leo warns Jennie, “They were very close. After 10 years, they’d still hold hands. After 11 years, I don’t pass the salt.” George fears that the loss will somehow only become a fact if he commits to a life with Jennie.

As hard as Jennie is willing to fight for their couplehood despite her own crippling scars, George must come to terms with having the right to be happy.

Although deeply wounded, neither LeGette nor Matthews’ characters  ever exude a shred of self-pity. Both actors create human beings struggling to get through another day. They make a convincing couple with more than enough chemistry to make their whirlwind courtship absolutely plausible. They both handle the comic lines with classic Simon timing, but they also dive fearlessly into the fear that sometimes keeps people from reaching out for love.

The only rough intersection that doesn’t fit well are the farcical comedy sections in which the two married buddies embark on an inept affair with each other.  Simon included them to balance out the heavy sections in which George’s dark side emerges, but they really seem to be from a different play.

Credit Leeds with augmenting the very talky script with stage action much of the evening – people pace, chase each other around, clinch and in the case of the two friends, wrestle with each other. He also smoothes along scene transitions with cannily selected music for the blackouts such as “Taking A Chance On Love” and “I Met a Girl.”

Chapter Two also says something about the Plaza Theatre. Producer Alan Jacobson’s undertaking seemed to carry a whiff of second-rate theater early on because it started out producing low-budget musical revues of varying quality and because it occupied the space where Florida Stage had mounted some of the best theater in the state. But it’s time to acknowledge that a well-received production of Driving Miss Daisy this season, a serviceable version of Luv and now this fine Chapter Two, all with full production values, proven directors and top-drawer casts, the Plaza has earned some respect. Yes, all these works have a name recognition factor to lure an older audience, but Jacobson has chosen darn good scripts and is insisting on executing them well.

Chapter Two  runs through Feb. 10 at The Plaza Theatre, 262 South Ocean Boulevard, Manalapan (the Ocean Blvd. bridge is closed for two years; come across the Intracoastal Waterway by Lake Road on the north or Boynton Beach Blvd. or Woolbright Road on the south, allow a little extra time for slow traffic on A1A.) Performances 7:30 p.m. Thursday-Saturday, and 2 p.m. Saturday-Sunday. Tickets $45.  Call (561) 588-1820 or visit theplazatheatre.net.