Once Is Touching Bittersweet Love Song Of Joy And Sorrow

Posted on February 5, 2014 by Bill Hirschman 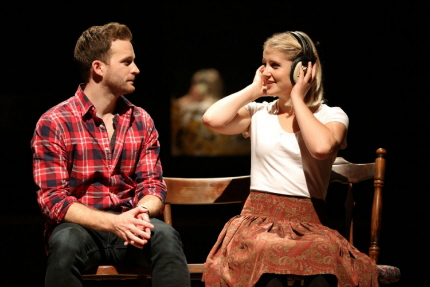 A yearning so palpable it almost becomes corporeal and a heartache without a shred of self-pity pour unapologetically from the stage in the legitimately affecting musical Once touring through Miami this week only.

The tears and smiles are honestly earned in this bittersweet romance leavened with the humor that only chastened challenged souls can muster. Two destined-to-be-parted soul mates meet, connect and inevitably separate having changed each other’s lives forever in the space of five days. And somewhere along the way, a clear-eyed vision emerges of love being precious but not always invincible.

This Broadway Across America tour is occasionally not quite as vibrant as the Tony-winning edition still playing in Manhattan, but much of the time this rendition is its equal and in a few spots, it’s actually superior.

Once is based on the 2006 independent film about an emotionally-wounded Irish singer/songwriter “Guy” and the quirky Czech emigré “Girl” he meets in a Dublin bar who encourages him to pursue the career he is about to abandon. They fall in love, but both have other calls on their affections that doom their brief, chaste transformative relationship.

The film was a charming and off-beat love story enhanced by a handful of songs written by the film’s lead actors, Glen Hansard and Markéta Irglová. The cult favorite received widespread exposure when one song, “Falling Slowly,” was nominated for an Oscar and performed at the Academy Awards.

Then stage director John Tiffany (currently represented on Broadway with The Glass Menagerie) enlisted bookwriter Enda Walsh, had Hansard/Irglová write more songs, and hired a key player, movement specialist Stephen Hoggett. The show premiered off-Broadway in 2011, moved to Broadway in 2012 and stunned observers when it beat out the popular Newsies for several Tony Awards.

Rather than recreate the film, the Tiffany/Hoggett/Walsh collaboration made — and the tour preserves this – for the moments of magic that illustrate how theater is not just unique but irreplaceable.

A favorite is the first act closer: Guy stands atop a bar in Dublin at open mike night to perform for the denizens, each of whom has their own instrument. During the first lines, the patrons don’t seem to pay much attention. But the loveliness of the words and music snare one, then two, then three listeners. One by one, the entire assemblage stands and plays along, stomping their feet in unison. It is the perfect visual metaphor for the unifying and transporting magic of music. If that didn’t quite have the punch that it does on Broadway (watch its performance on the Tony Awards at http://www.youtube.com/watch?v=6ehVXwFMQqs) it’s still  thrilling.

But even stronger than the New York version occurs later when Guy’s ad hoc band have just finished an all-day, all-night recording session of a demo. In the pre-dawn, they wander to an overlook of the city and the sea. Facing the audience, they sing a capella the same song from that earlier scene with a breathtaking, hushed delicacy. The loveliness of their melding voices reflects the beauty of the sight that they can see but we don’t.

Unlike some tours, Tiffany returned to direct this one. He gives special attention to Walsh’s deft book scenes which get too little praise because of the music. Just as with the New York version, Tiffany insists his actors insert long silences in clumsy conversations during which the most consequential questions are asked and answered but not actually verbalized.

In this intimate theater piece, the arc of the love story is retold in a Dublin pub by a group of 12 musicians who jam there. They provide the acting troupe, stage crew and on-stage orchestra.

The score is comprised mostly of Guy’s tender songs performed by the couple and the company as they rehearse and perform them for the pub’s audience. They don’t advance the plot so much as express the singers’ feelings. It’s an emotionally pungent folk-pop meld. The music is generally gorgeous with echoes of Joni Mitchell and Nanci Griffith, especially when Guy on guitar and Girl playing piano let the music speak what their mouths cannot. With the exception of an electric bass, it’s all acoustic: mandolins, an accordion, cello, banjo, melodica, drum set, even banging on wooden milk boxes. Guitars are strummed like a man stroking his lover’s hair and fiddles draw out a single note like a pure loose strand of silk being pulled from a sweater.

Tiffany and Hoggett love playing with theatrical expectations. For instance, audience members can come up on stage before the show and buy overpriced wine, beer or water and wander the barroom set. About 7:50 p.m., much of the cast comes out and jams on tunes surrounded by the visitors. Around 8 p.m., the visitors are ushered off the stage but the jam sessions continue with the house lights still on for another 10 minutes or so. Eventually a newcomer joins the concert and plays an edgier tune. Imperceptibly, the house lights fade until suddenly the audience realizes that the “show” has actually started. This is Guy and he is singing the first song “Leave” in the bar as “Girl” watches.

Another magical moment, actually a miraculous one is the last song played before the show “starts” — “On Ragland Road,” a slow sad song of transitory love sung quietly by Raymond Bokhour. He manages to bring the usually noisy, thoughtless, talkative Arsht crowd into silence even though the house lights are still on – usually what the audience sees as “permission” to babble loudly all the way through an overture.

Appreciation is due Hoggett (Peter and the Starcatcher), or more accurately the teamwork of Hoggett and Tiffany in bringing a highly theatrical and sublimely eloquent use of body language to enhance the story. They created shock waves a few years ago with the stunning staging of Black Watch, the story of a Scottish regiment trying to cope with the aftershocks of a nightmarish tour of the Middle East wars. That work must be seen to be believed and all of it is on You Tube for the viewing. Hoggett also donated to the movement interludes in the scene changes that Tiffany inserted in the current The Glass Menagerie.

Every single member of the cast is a quadruple-threat: singer-actor-musician-dancers with no compromises in any area. Stuart Ward exudes Guy’s sensitivity and charisma. His voice on some numbers is more ripsaw ragged than the actor who originated the part, Steve Kazee, but that communicates a heart is bleeding internally. Staunching that blood, Dani de Waal inhabits Girl’s amusing and adorable directness without completely disguising that she carries sadness of her own.

For those unfamiliar with the show, this may sound terribly depressing. In fact, it is often quite funny and celebratory. It simply accepts that joy and sorrow can be encompassed in the same moment – a microcosm of life itself. What is important to the creators is that these lives that had been “stopped” have been unplugged to flow onward.

Once from Broadway Across America at the Ziff Ballet Opera House at the Adrienne Arsht Center for the Performing Arts, 1300 Biscayne Blvd., Miami. 8 p.m. Wednesday through Saturday, 2 p.m. Saturday, 1 and 7 p.m. Sunday.  Running time 2 hours 15 minutes including intermission. Tickets, $26 to $125. For more information, 305-946-6722 or www.arshtcenter.org.

This entry was posted in Performances, Reviews and tagged Broadway Across America, Enda Walsh, John Tiffany, Once, Stephen Hoggett. Bookmark the permalink.