Posted on February 8, 2014 by Bill Hirschman 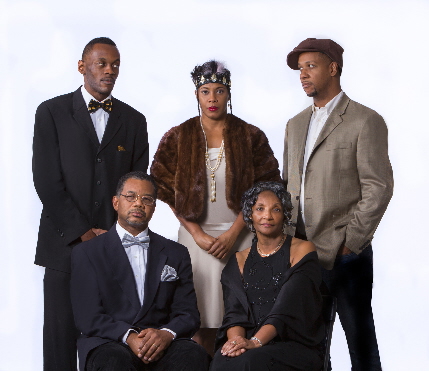 Some of the cast of Knock Me For A Kiss, the play that M Ensemble is producing at its new home: top row, Samuel Umoh, Makeba Pace, Ethan Henry, bottom row:Andre Gainey, Carolyn Johnson

Some vibrant performances – one of them pure electricity – rescue M Ensemble’s uneven production of Charles Smith’s intriguing but flawed script about boldface names from the Harlem Renaissance, Knock Me A Kiss.

Much of the story is documented truth about Yolande, the daughter of civil rights activist W.E.B. Du Bois. She is torn between the affections of the charismatic bandleader Jimmie Lunceford and the sophisticated poet Countee Cullen – all real people. But the actors create human beings awash in emotional turmoil rather than venerated stick figures from a Black History Month pageant.

Smith’s 2000 play contains near-poetry from the mouths of the cultivated Du Bois circle, contrasted with the earthy but no less lyrical street patois of Lunceford and of Yolande’s buddy Lenora. (“I’ll be as quiet as a mouse pissing on cotton” is one slangy line.)

The plot centers on Yolande (a luminous Makeba Pace), who wants to teach high school in inner city Baltimore. The spoiled Daddy’s girl is visiting her iconic father (André L. Gainey) and slightly daft mother Nina (Carolyn Johnson) in Harlem. While there, she is wooed by the ebullient Lunceford (the dynamic Ethan Henry) who wants her both in his bed and in his life permanently. But her father encourages her to embrace the attentions of the intellectual but diffident Cullen (Samuel Umoh). Ever with an eye to appearances, Du Bois is seduced by the potential marriage of “bloodlines,” beauty and brains to exploit as an example to the black community. Acting as Yolande’s head cheerleader and confidante is the vivacious Lenora (Lela Elam).

One key problem in the script is that Yolande, a bright and independent spirit, strings along both suitors who have proposed marriage, selfishly lying to everyone about each one’s importance to her. No surprise, under the pressure from her father, she chooses Cullen, who the dullest audience member figured out two scenes earlier is a closeted gay man already in a relationship. When the pair fail to consummate their “marital obligations,” the union disintegrates. Later, But Yolande tries to reconnect with Lunceford, first suggesting that she and Cullen have an open marriage, and alternatively,  restarting their relationship after she divorces Cullen.  But the chastened musician refuses. Everyone’s miserable at the final curtain and it’s difficult to figure out what the Aesop moral of this fable might be other than “marry the hunk for love, sister.”

This soap opera synopsis accurately represents the plot, but Smith has laced it with deeper notes of social issues. Unfortunately, the play or at least this production flits about them without solidly landing on any of them, so they cannot be considered full-fledged themes. Something isn’t being played out as fully as it feels like it should.

For instance, the playwright questions the sacrifices some African-Americans made to advance civil rights, such as Du Bois’ blithe opportunism in dismissing his daughter’s happiness in favor of what the marriage could mean to the movement. Other times, the play seems to be about the disparate caste system within the black community using Lunceford and Cullen as alien facets within a single ethnicity. Other times, it seems to be about medieval attitudes toward sex, especially within a marriage, such as Nina’s pronouncement that sex is a responsibility to be tolerated and eventually acclimated to.

The worthwhile element of the evening is some of those actors’ portrayals under Lowell Williams’ direction.

Ethan Henry has quickly established himself as one of the most exciting actors in the region. As with his title character in M Ensemble’s King Hedley II, Henry vibrates like a tuning fork. From the moment Lunceford dances onto the stage with Yolande, Henry seems to throw an oversized electrical switch to energize a bank of floodlights. His Lunceford exudes a charismatic lifeforce all the time, but doubly so when he is in wooing the woman he loves. Henry’s Lunceford is a joyously carnal creature who wants sex with Yolande as an expression of true love. Handsome, sensual and with a sonorous voice like the Allstate insurance pitchman, Henry ought to be first in line the next time someone is casting Stanley in A Streetcar Named Desire.

Pace, who is Henry’s real-life wife, is similarly as reliable a hand as a director could hope for. As she did in her aria last season as the agonized wife in King Hedley II, Pace uses her twinkling eyes, warm smile and fierce intelligence to build a Yolande who is both admirable and flawed. Certainly, she is convincing when Yolande enjoys Lunceford’s pursuit of her, but she is just as believable as she ambitiously pursues the evasive Cullen. Unfortunately, Smith has put Yolande in some improbable dilemmas and had her make some foolish choices, which is tough for any actress to make credible.

Every Hamlet needs a Horatio to talk to or at least a Thelma Ritter. Few fill that sidekick bill as well as the ever-dependable Lela Elam, who savors every whipsmart wisecrack with a toss of her head and radiates jubilation.

Gainey exudes a warm geniality in almost every role we’ve seen him in. Unfortunately, those qualities don’t jibe with the imposing, fearsome gravitas that this role requires. Smith’s vision of Du Bois is of a man willing to sacrifice every aspect of his life, including personal and familial, to the greater good. Gainey seems just too nice a guy to make that supreme pragmatism plausible.

Johnson is incapable of a bad performance, but her tamped down distracted Nina is uneven. Nina is supposed to be a bit unhinged over the death of their infant son years earlier, which she blames on Du Bois’ insistence on working in segregated Atlanta with poor medical help close by. But sometimes Nina just seems too disconnected to be believable. Occasionally Johnson gets a protracted reminiscence and then her reverie becomes hypnotic.

Umoh has a tough challenge because Cullen is so stiff and formal around the Du Bois family that he seems one-dimensional and bland. We only see a little charm peek out on a date with Yolande; virtually no emotion slips out until their marriage begins to fray.

A nod is due the costume design by M Ensemble co-founder Shirley Richardson for Yolande’s sequined flapper dress and headband to the elegant bowties and vests of Du Bois and Cullen.

This is the first production in M Ensemble’s new home in the Black Box Theater at South Miami-Dade Cultural Arts Center, a new facility in Cutler Bay. The space is lovely with plenty of parking and the large glass structure facility is easy to find, two blocks west of exit 11 on the Turnpike. The problem is that the location is a long, long ways from the core audience of the oldest continuously operating African American theater in the state, and a longer haul from central Broward County (a 100-minute ride during rush hour). The turnout opening night was dispiriting; the theater is considering providing park-and-ride packages from its office space in north Miami.