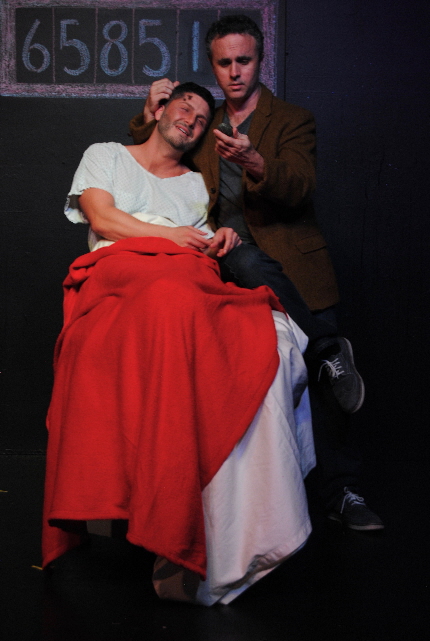 Seth Trucks cradles his dying lover Conor Walton in the finale of The Normal Heart from Outre Theatre Company / Photo by Shannon Ouelette.

The level of anger, helplessness and sorrow rises inexorably along with the death toll, like flood waters from a storm surge in Outré Theatre Company’s shattering production of The Normal Heart.

The play documenting the AIDS epidemic in New York City during the early 1980s – how it was side-stepped by politicians and the media, how the gay community divided in how to deal with it, but above all the ineffably tragic human cost – is depicted with scorching and excoriating emotional honesty.

This physically spare production makes a virtue out of the tiny Showtime Performing Arts Theatre in Boca Raton by putting you inside the room where people quake with terror as they are told they have a fatal incurable disease and later as their extended families agonize, mourn and rage. It’s the theatrical equivalent of protracted cinematic close-ups.

Pioneering activist Larry Kramer’s 1985 script has always been a challenge as it drenches the dramatic narrative with an overwhelming torrent of statistics and unrestrained polemics through scenes of pure emotional discharge. No production may completely overcome Kramer’s hectoring rants and massive info-dumps. But this one comes close under the steady helm of Outré managing director Doug Wetzel by cloaking the numbing data in the outrage of those delivering the information

Just as crucial is that Wetzel has elicited some of the most effective performances that we have seen some of these particular actors give.

For instance, regular theatergoers have seen Lawrence Buzzeo in a variety of roles, some barely worth his efforts, some more impressive. But as the even-tempered affable volunteer Mickey, Buzzeo carefully crafts a second act aria in which pent-up lava inside the seemingly dormant volcano surges until it explodes in an all-consuming conflagration of confusion, fear, frustration and anger that encapsulates the crisis’ effect on the entire community. It’s a masterfully executed cri de couer that ends as one friend tries to comfort him with, “Mickey, try to hold on.” To which Buzzeo/Mickey responds with heart-rending hopelessness, “Hang on to what?”

The Normal Heart follows flame-throwing activist Ned Weeks (a fictional, but unapologetically autobiographical Kramer) as he helps found and propel the gay community’s proactive response to the mushrooming spread of “the gay plague.”

Ned (Seth Trucks) is an unrestrained alienating Jeremiah not crying, but screaming in the wilderness as official bodies and his closeted community falter and even ignore this lethal scourge. Over three hours (with intermission) the play charts his efforts along with the determined but disheartened doctor Emma Brookner (Elizabeth Price) and a group of gay friends including the conservative establishment banker Bruce Niles (Christopher Mitchell) who pushes for a cautious approach.

Stymied by bureaucratic indifference and politicians’ fear of homophobics’ backlash, this deeply divided group struggles to raise awareness and support, but especially wrestling with the unacceptable-to-some likelihood that the virus is being passed through sexual contact.

Without seeming maudlin or mawkish, the entire spectrum of passion from love to fury to terror suffuse the production from the very first scene where friends make small talk in Brookner’s waiting room while across the stage Brookner silently gives the fatal prognosis to Craig (Eytan Deray) who believably collapses in paroxysms of mute grief. Still, Kramer weaves in humor ranging from witty repartee to standing-on-the-gallows humor.

Being performed 35 years (35 years!) after the first deaths were tracked, The Normal Heart has mild present-day resonances on paper. But it must seem like history or folk tales to a generation-and-a-half of gay and straight audiences born since, something reflected in the Terrence McNally play Mothers and Sons.

One aspect that it’s hard for most people today to realize, recall or appreciate is how little was known early on, how this mysterious “thing” was killing people like the unseen unidentified madman in a terrible horror movie. To begin with, there was no way to diagnose who might be carrying the virus even if they were not affected; and the only way to know someone had it was to observe the symptoms,  which meant they were doomed. At one point, Felix asks in extreme anguish, “Can we make love?” Ned shakes his head. Then he asks with pleading incredulity, “Can we kiss?” Ned cannot answer.

A far more empathetic and accepting world in 2016 will have some difficulty dealing with the timidity of some of the activists, but Kramer accurately shows that some people had fought for 15 years for even a modicum of acceptance by some facets of general society – and even by themselves among themselves. They did not want to see that immolated in a too strident effort.

But The Normal Heart’s endurance and even universality as theatrical drama as well as reportage of a specific time is the human element, how real people deal with a real tragedy, divested of all the noble heroics that creative writers gift to their protagonists.

One of the insightful aspects of the script and this production is Kramer/Weeks’ anguished efforts to persuade gay men that their sexuality is far more than carnal urges, but something akin to ethnicity – a multi-faceted existence that should be accepted as normal by society and yet whose differences should be honored by the members themselves.

But the heart of the production are the performances that are not just deeply felt but feel like credible depictions of genuine people rather than actorly moments emoting in the spotlight.

Trucks, a mainstay at Evening Star Productions and frequent essayer of Shakespeare, inhabits the demanding central role of Ned. He succeeds at the difficult task of keeping Ned from being an unrelenting shrill, but instead someone uncontrollably compelled to fight. His initially modulated but growing outbursts reflect varied stages of ire from disappointment to wrath. But between eruptions, Trucks and Wetzel have Ned drive his anger into an almost impassive mask which provides needed variety but fails to convey the rage simmering beneath that surface. Still, he is totally believable when straining and failing to deal with Felix’s illness. Trucks is heartbreaking when Ned ends up on the floor emotionally devastated holding his decimated lover in his arms.

Walton, whose range has been seen from the cold killer in Thrill Me to the fey narrator in Into the Woods, superbly charts the deterioration. He begins as an upbeat urbanite who enjoys living with elan and who deeply loves Ned with all his imperfections. But Walton convincingly portrays the emotional gauntlet from determined hope to hopeless husk as he discovers the illness and his body deteriorates.

Price, who floored audiences as the troubled dollmaker in Arts Garage’s Reborning, wisely keeps her performance in check in this tiny space. While she doesn’t have the crusty fury that her predecessors have invested in the part, she opts for a deceptive calm that comes from long weariness, sadness and frustration of having dealt with the tragedy face to face and the bureaucracies for a very long time before Ned and company join her crusade. It’s only when she has her funding request rebuffed that she allows that anger to flow out.

Among the moments Price nails to the wall is after she gives pole-axed Felix the bad news, he insists that he will be the one to beat this. Her face and carefully measured response try to gently communicate the unlikeliness of the reality. She says with seeming sincerity, “I will do my damnedest.” Then Felix regains a bit of his bravado and makes a weak joke, “I bet you say that to all the boys.” Price/Brookner gives a small smile in appreciation of the joke. Then she turns her head away from him and her face shows the sad truth: Indeed, she does say it all the time and has all too often.

Almost everyone gets passages to expose their ability. Notable are Mitchell whose reticent oh-so-careful leader finally reveals his personal grief and Michael H. Small as the mayor’s aide whose feelings of guilt are hidden under the unaccustomed affront being insulted by Ned’s uncensored tirades. A nod, too, to Robert Fritz as Tommy and Ben Prayz as the straight lawyer brother Ben Weeks.

Wetzel’s commendably varies the intensity of the emotional pitch, but the stately pace only changes occasionally, such as a frantic phone bank scene or an elegiac farewell.

The only significant shortcoming is the lengthy draggy scene changes in which furniture is carried on and off stage in half-light. Some of this is due to the logistics of the shoebox-narrow performing platform, but perhaps some of the set pieces could have done double duty. It is, in fact, the simplicity of the set that admirably focuses our attention on the people onstage. We can also carp that while Wetzel moves people around the stage deftly in some scenes, sometimes he just lines up four or five people across the shallow stage.

The set is simple: a black box with chalked statistics on the back wall charting the annual growth of the fatalities and a large odometer-like tote board whose cumulative number start at 658,207 and grow through the evening.

But the overall production is harrowing – harrowing as in those phalanx of razor-sharp spinning discs ripping up the frozen ground to unearth the raw earth beneath.  Outré, after a spotty life at the Broward Center, has moved at least for this season to the Showtime space which serves during the day as a youth conservatory. Seating is extremely limited and there are only four shows a week, so order your tickets now.