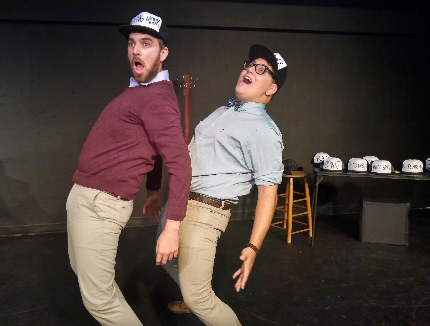 The cast of Evening Star Productions’ Gutenberg! The Musical

Half of the audience inside Boca Raton’s Evening Star Productions for the Sunday matinee of Gutenberg! The Musical! was expecting the sort of musical that happens at the other theater up the road. You know, about four miles north on Federal Highway, where they stage the big, bold American musical songbook.

The other half were obviously the same group who runs to see Forbidden Broadway whenever it’s in town, who still watch Saturday Night Live every week (even though it’s lost a bit of its luster), and who took no offense to The Book of Mormon.

The Evening Star production at the Sol about a pair of musical theater geeks who invite some “big Broadway producers” to see their idea for a “big Broadway musical” satisfies the same comical funny bone.

Fictional theater duo Doug Simon (Alex Weiss) and Bud Davenport (Robyn Brenner) have created a play – one of those strapping historical epics – about Johannes Gutenberg, the 15th-century  German inventor of the printing press. Dealing with a small village full of drunks, rats, an evil monk, a hunchback monk assistant, and a town that can’t read. Yawn if you must, but just describing the concept brings about a laugh.

There’s the love interest, a grape stomper named Helvetica (that’s a font, Doug informs), who is in love with Gutenberg. In perfectly satirical form, the writers riff on the likes of Les Miserables and Phantom of the Opera.  There are the inside references to theater conventions, in which Doug and Bud offer the audience a primer on character development, metaphor, first act finales and the charm song (an up-tempo song that is placed in a musical for no other reason but to charm the audience).

They play every character in their musical and rather than costume changes, this basement theater production utilizes baseball caps with the character’s name scrawled in Sharpie. Scott Brown and Anthony King developed Gutenberg! as a workshop production while they were part of the Upright Citizen Brigade, the highly respected improvisational and sketch comedy troupe that counts Amy Poehler as one of its alums. King was UCB’s artistic director from 2005 to 2011.

In the script’s notes, they emphatically tell anyone producing Gutenberg! The Musical! that this is “ostensibly a reading of a musical. It should absolutely not be performed on anything resembling an appropriate set for the show-within-the-show. Every set piece and prop should be simple.”

And this what we get, which shows how much director Ben Sandomir and actors Weiss and Brenner, and even obtuse pianist Jason Buelow, understand what it takes to bring Gutenberg! The Musical! to life. It’s not an easy task.

Everyone involved must be convincing in their own “buy in” that this musical about the first printer of the mass produced Holy Bible is worthy in order for the audience to become invested. There’s a lot that happens in a short time in “Gutenberg! The Musical!,” but Sandomir keeps the pace in check so that there’s no getting lost – it’s not easy when all you have to signal a character change is a Sharpie-penned hat, so the actors need to flesh out everyone from the coyish Helvetic to the town Drunk to a village rat.

And Weiss and Brenner do it with the comic timing of a modern Abbott and Costello. Weiss is reminiscent of The Office actor John Krasinski, channeling the same gift for believable earnestness. Weiss’s bio states that he trained with the Upright Citizens Brigade in New York City, and it’s what gives him the edge to convey the improvisational foundation of which the show was obviously built. As the musical half of the duo, Brenner commands an equally comic presence. His Bud is obviously overstated – he plays the role of the wicked monk on par with any Disney villain. Both never miss a bit while having to switch characters and make sure the right one is under each hat.

When the play within a play returns to the life tales of Doug and Bud, the pair are so humbly clueless about how bad their musical is, yet so authentic in their presentation, that you want to start a GoFundMe page to help them get the show off the ground.

Hats off, Evening Star Productions, for insider’s theater that is satirically spot on.