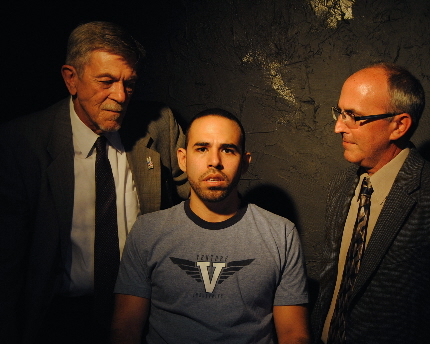 The temptation is to describe Yussef el Guindi’s nightmarish Back of the Throat as Kafkaesque or satirical absurdism worthy of Lewis Carroll as Outré Theatre Company depicts an America gone mad.

But it’s not. That’s the real horror. The extremities unfolding before the audience are a logical if artistically exaggerated extrapolation of the paranoia and xenophobia unleashed in tandem against Arab-Americans after 9/11. It’s naturalism not surrealism.

Far more than a rant about this country’s excesses after the Twin Towers tragedy, Back of the Throat is a universal cautionary tale of how fear can trump our ideals, even our humanity in the interest of expedient self-defense.

And Outré, operating on a shoestring and specializing in edgy work with a social message, has outdone itself with the best offering of its three-year history – a production so powerful that the opening night audience just sat stunned in their seats after the lights came up.

Other than theatrically staged flashbacks, Back of the Throat is constructed as a real-time 85-minute interrogation of a naturalized Arab-American suspected for some undisclosed reason of complicity in a recent terrorist attack.

Braced in his own apartment after giving permission to two investigators to look around, the hapless innocent Khaled is at first only uneasy at their enigmatic questions.

But genteel inquiries give way to physical violence and shattering humiliation. The noose tightens until he realizes that he is predestined by the feds’ rationalized guilty-until-proven-innocent logic in extremis.

The performances under the sure guidance of artistic director Skye Whitcomb are perhaps the best we’ve seen from everyone involved, especially Rayner G. Garranchan as Khaled, and the always superb Jim Gibbons as Bartlett, the iron fist in a velvet glove interrogator, and Tim Gore as his terrifyingly implacable and methodical partner Carl.

What is especially unnerving about the public servants created by Gibbons and Gore is that while you cannot excuse their abuses for five seconds, the internal logic of their thinking charted by el Guindi is unassailably consistent. Therefore, it has a weird integrity. Right is on their side and there is not a milli-second’s doubt in their mind; that empowers them to violate every American and Judeo-Christian tenet in the book.

That also allows them to indulge in the most backwards thinking processes possible. As Carl gets ready to viciously kick Khaled, he says calmly, almost regretfully, “This will take away from your humanity, which is not good for us,” and later, “If you’re innocent, why did I kick you?”

El Guindi, an insightful playwright from Seattle, is not out to demonize the institutions with a one-dimensional screed. The play is an object lesson in the consequences when society’s tacit approval or even indifference enables abuses that counter what we profess to believe in.

In fact, an interesting resonance arises when the interrogators have jettisoned their humanity with almost the same ends-justify-the-means we-have-been-driven-to-this logic that the terrorists themselves use – each extremism engendering the other in a symbiotic dance of death.

El Guindi takes it one step further. The play ends with an eloquent speech by the dead 9/11 plotter who has appeared as a mostly silent ghost or in flashbacks. In a frighteningly calm and measured performance by Freddy Valle, the terrorist explains his rationale in a way that would be seductively persuasive if not for the horror of what we know he plans to wreak.

The playwright carefully constructed this dance with ever-morphing tempos and Whitcomb has matched it step for step. His verbal and physical staging is appropriately fluid. Whitcomb and assistant director Sabrina Lynn Gore have not paced the journey in the sense of it being fast or slow, so much as tightening and loosening and then tightening again the feeling of encroaching doom. With his actors, he has created tones that range from pleasant to threatening. The evening feels like a blind man desperately trying to find an escape from an ever shifting labyrinth. He also moves the action cinematically between the interrogation and flashback scenes with very different witnesses, all inhabited convincingly by the wonderful Faiza Cherie.

So many of the twists of the garrote are subtle but clear. During the opening scene, Bartlett exudes faux cordial banter with Khaled, “apologizing” for being intrusive even as they blithely violate his space. Carl methodically searches the apartment, paying special attention to the bookcase. Carl removes volume after volume as if he has discovered clues; Khaled becomes increasingly concerned that the titles can be misconstrued. Carl assures him not to worry; they will be out of here in five minutes. Shortly thereafter, with the confiscated books accumulating, Carl takes off his jacket and rolls up his shirt sleeves. Chilling.

Later, an alarmed Khaled, fearing that he is being railroaded, says to the staring men, “I’d like you to leave.” The men don’t even blink. Then, after a second or two of silence, Bartlett says with feigned sympathy, “I’m sorry you feel that way.” It’s now clear that the point of no return has been crossed. But in retrospect, Khaled and we realize that line was crossed when he agreed to cooperate with them. And as we learn later in flashbacks of possible witnesses against him, that line was crossed long before the men arrived.

Occasionally, the lawmen explode in invective and violence – although you wonder if that isn’t just another calculated use of a tack in the interrogators’ toolbox. Gibbons in particular has an unnerving venting speech about how immigrants have the unmitigated gall to invoke Constitutional rights when they are destroying this country—even as he acknowledges that he is the proud great-grandson of immigrants. “Yesterday, it was the Irish and the Poles; tomorrow, it might be the Dutch,” he says.

Garranchan creates a protagonist so breathtakingly ordinary that we cannot help but identify with him. He starts a bit apprehensive as his apartment is inspected. But bit by bit, with Whitcomb’s guidance, Garranchan ramps up the anxiety with a literally open-mouthed expression of amazement and fear as his visitors ignore questions about what he is being accused of. Garranchan’s Khaled hollowly pushes back, invoking his rights, already knowing that these men have no intention of honoring them. By the time Khaled gets angry, it is way too late.

But the play’s success is rooted in the measured performances of Gibbons and Gore as the bureaucratic functionaries who have heard every lie so often, dealt with traitors for so long and who are so convinced of their righteousness that their terrible pursuit is conducted with a surgeon’s dispassion, later revealed to harbor festering rage. These are not slobbering sadistic monsters – which is what makes them all the more frightening.

Gibbons has been one of the region’s best and underused actors for a decade and a half, notable for his honey smooth Louisiana accent with a bourbon kick. While he has played similarly menacing roles (e.g. the policeman in Infinite Abyss’ The Pillowman in 2011), his talent has just deepened over time. Tall, courtly with piercing blue eyes, Gibbons smoothly changes gears emotionally.

Gore seems transplanted out of a police detective bullpen somewhere. Taciturn and preternaturally all business, even his explosions of violence seem calculated. He seems resentful that this ungrateful slime has forced him to these extremes – although he has no compunction about it at all. The two actor/characters have a nice chemistry of long-time partners, especially the way they exchange glances when Khaled says something neutral that they take as confirmation of their suspicions.

Outré is moving later this season to the Broward Center’s Abdo New River Room, but it has been given temporary quarters at the tiny Sol Children’s Theatre in a strip shopping center in Boca Raton. The space is intimate, ratcheting up the claustrophobic feeling. But it also has a limited number of seats and Outré has had to cut back its schedule, so get your tickets now.

This has been a remarkably strong season so far. Back of the Throat joins GableStage’s Mothers and Sons, Actors Playhouse’ Murder Ballad, Palm Beach Dramaworks’ Our Town and Slow Burn Theatre Company’s Carrie The Musical to create as improbably impressive a few weeks of theater as we’ve seen in South Florida for quite some time.

Back of the Throat runs through Nov. 9 from Outré Theatre Company in cooperation with Evening Star Productions and Sol Children’s Theatre, performing at 3333 N. Federal Highway, Boca Raton. ) Performances 8 p.m. Friday and Saturday, 2 p.m. Sundays, with an industry night performance on Monday, November 3, at 8 p.m. Runs 85 minutes with no intermission. For tickets, visit www.outretheatrecompany.com or call (954) 300-2149.