Passable Dial M For Murder Doesn’t Quite Ring Any Bells

Posted on November 5, 2015 by Bill Hirschman 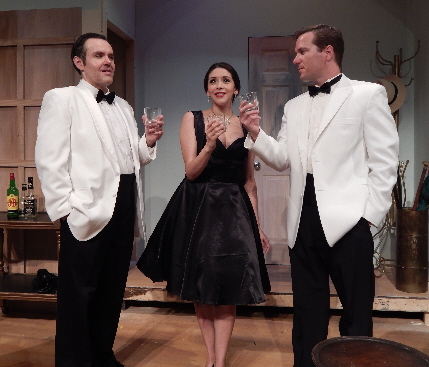 The classic 1952 crime play Dial M For Murder is a brilliantly-designed timepiece of plotting and dramatic construction. Unfortunately, Broward Stage Door’s barely serviceable production of this supposed thriller lacks much sizzle or suspense.

No one does a poor job in any department, but neither does this production fulfill this warhorse’s time-tested potential. Maybe the piece has just outlived itself: The Maltz Jupiter Theatre’s well-heeled production in 2013 with top-notch personnel similarly failed to electrify the auditorium.

The plot, well-known thanks to a still-effective film by Alfred Hitchcock, introduces us to retired and over-the-hill tennis pro Tony Wendice (Jason Plourde) living in a comfortable apartment in London.

Wendice blackmails a former classmate and current gigolo Capt. Lesgate (Sean Dorazio) into a plot to murder Wendice’s wife Margot (Gladys Ramirez) for her money. Margot foils the plot by stabbing Lesgate to death with scissors, but she becomes the chief suspect because Wendice has framed Lesgate to look as if he was blackmailing Margot over her affair with American mystery writer Max (Roy Lynam).

Chief Inspector Hubbard (Larry Kent Bramble) initially makes the case that has Margot awaiting execution, but the tables turn more than once in a series of cat-and-mouse games between various characters in which everyone speaks in polite pleasantries.

Directors Arthur Whitelaw and Derelle Bunn keep the plot moving forward, but their competent actors lack the extra charismatic oomph that Hitchcock had in Ray Milland, Grace Kelly and Robert Cummings. The attempted murder, which is a chilling highlight of the film, lasts all of about three seconds here.

Plourde has a weird smile that indicates Wendice’s relishing of his long aborning plot coming together. He also has some of Wendice’s blend of false charm and lack of conscience, but not enough to make the audience’s blood chill at a curdled soul. Lynam is handsome and pleasant but also is missing any credibility; he’s saying lines. Bramble is reliably avuncular and incisive.

Ramirez has been gaining plaudits over the years for work ranging from the girlfriend in GableStage’s The MotherF**er with the Hat to multiple roles in various Summer Gone Wild outings to Alliance Theatre Lab projects. But her heroine here is just a dishrag with an annoying brittle British accent. No backbone, no personality specific to the character. Again, she’s not bad, just adequate.

The set design by Michael McClain is attractive middle-class Britain, but contrary to the mood of the piece, the wood paneling is blond and the walls above are painted like fluffy clouds on a blue sky.

Geek notes: Dial M For Murder was the first play written by Frederick Knott, universally rejected until he sold it as a BBC-TV script in 1952 (a droll touch since the play tweaks the nose of the new medium several times). The same year, it became a smash on stage in London, followed a few months later by a similar success in New York. Hitchcock and Knott made a few minor changes for the 1954 film version with Milland, Kelly, Cummings and John Williams (the instantly-recognizable British character actor, not the Star Wars composer). Knott only wrote three other plays and only one, Wait Until Dark, was a success, 14 years later. But they became staples of regional and community theaters, keeping Knott financially comfortable until his death in 2002.