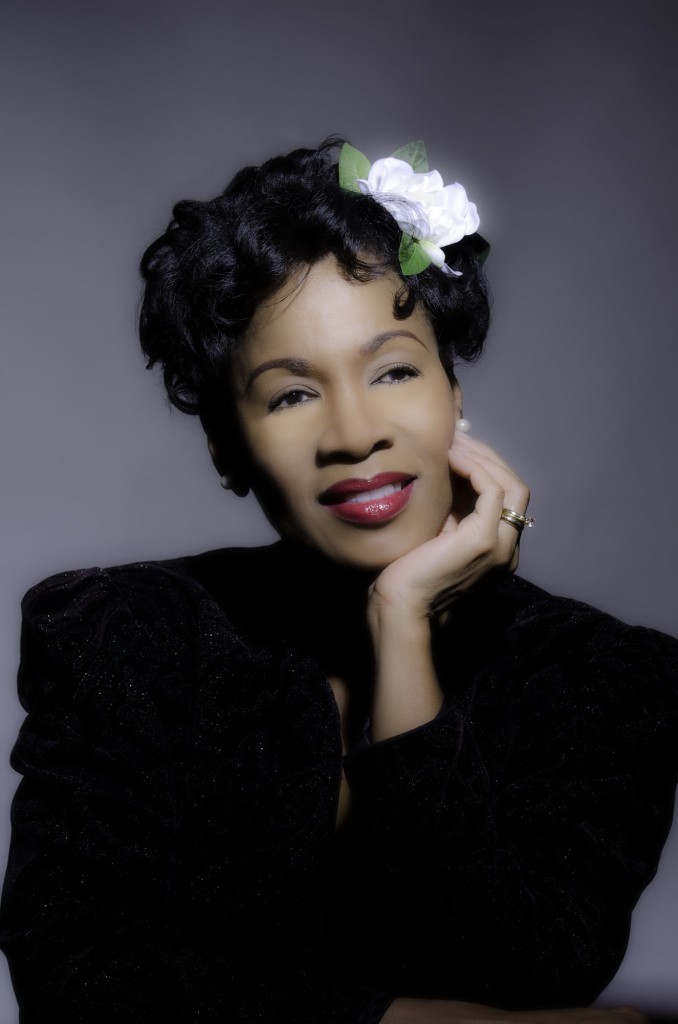 Billie Holiday strides to the microphone, the image of elegance in a clinging floor-length white gown and long formal white gloves.

With an assured aura of self-possession, she launches into a jazz ballad, her voice dark and liquid like sweet bourbon deftly pouring around the melody like ice cubes in a tumbler.

But it’s an act. The confidence evaporates over the next 90 minutes and the gloves slip down to reveal bleeding track marks at the crook of her elbows.

Lanie Robertson’s script posits an appearance at a small Philadelphia club about four months before her death in 1959. As the evening wears on, Holiday tells her audience horror stories about her substance abuse, unfaithful lovers, childhood rape, prison term and encounters with vicious racism.

She punctuates each revelation with a hollow laugh that a casual observer would perceive as “Ain’t life funny?” but in fact covers up an abyss of pain. With each tale, the increasingly melancholy Holiday downs more liquor and eventually retreats offstage for a shot of “moonlight.”

This play done several times in the region, most recently by Dozier for Boca Raton Theatre Guild, is a surprisingly strong script, which unabashedly makes Holiday’s performance before us mirror the tumble of her life as a whole.

Through much of it, director Dan Kelley and Dozier create a duality: the strong, almost divine voice discovering fresh phrasings and tempi in her performances on stage, juxtaposed with the deteriorating real life that she relates in salty language when she steps off the bandstand.

Dozier and Kelley artfully and smoothly chart Holiday’s gradual descent, especially using body language. At first, there are the small graceful hand and arm gestures as she sings, body slightly leaning to one side, eyes always half-closed as if seeing an image in her head. Then, we see the increasingly wobbly figure who stumbles like a sleepwalker in a drug-induced haze.

But obviously, the requisite skill is in delivering Holiday’s repertoire. Dozier is more than a match for these two-minute slices of musical nirvana. While Holiday herself mocks her audiences’ expectation that she will sing her most famous songs, “God Bless the Child” and “Strange Fruit,” Dozier/Holiday doesn’t stint on investing consummate technique and profound emotion in her deeply affecting versions. The production is elevated by a dead solid band of Kai Sanchez on upright bass and Howard Moss led by musical director David Nagy.

Sometimes the pacing can seem a little lethargic when Holiday tells a story. Also, that hollow laugh mentioned earlier sometimes seems overly and distractingly false.  Virtually every one-actor biography struggles in vain with the architectural limitation of  “and now let me tell you this famous anecdote” that would never happen in real life or even a conventional drama.

Still, when Dozier’s heroine pines repeatedly for a life with a home and children that she will never have, Lady Day becomes a human-sized Greek tragedy.