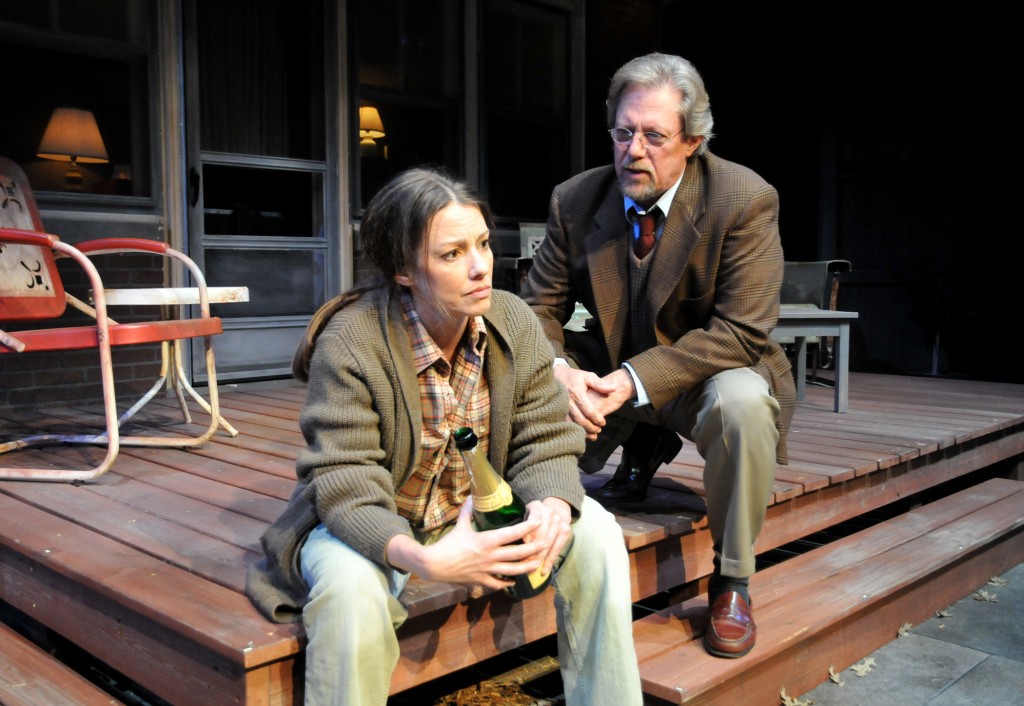 The reason some people love dealing with numbers, folks like scientists and social misfits, is that they are precise and reliable. Two plus two never makes seventy-three. Best of all, if you make a mistake adding a column of figures, you can find the error and correct it.

Dealing with people, on the other hand, is messy. Human relationships are unpredictable, tricky to decipher and very difficult to correct.

Such is one of the underlying themes of David Auburn’s Pulitzer Prize-winning drama Proof, enjoying a solid production at Palm Beach Dramaworks.

Although set in the milieu of mathematical theorists exploring the abstract mysteries of science, the real truth-seeking is the audience-accessible but far murkier mysteries of the heart.

Director William Hayes is not a showy director. His theater is about serving the playwright more than indulging in theatrical pyrotechnics. This nearly invisible technique, and there certainly is technique at work here, results in a persuasive naturalism that allows the audience a clear view of Auburn’s themes, relationships and plot gyrations.

Auburn’s script, as elegant as the mathematical MacGuffin at the center of the play, includes flashbacks, fake outs and a plot reveal that upends the play in progress. So we have to tiptoe to avoid spoilers.

Catherine (Katherine Michelle Tanner) is a 25-year-old collegian in Chicago whose recent past has been commandeered caring for her beloved father, Robert (Kenneth Kay) a legendary math theorist who languished in dementia four years except for one interlude of lucidity.

Robert had just died, leaving the socially-awkward and prickly-on-her-good-days Catherine in a crippling depression. Running beneath her grief is the terror that she has not only inherited her father’s preternatural intellect but the seeds of his insanity as well. Certainly, that’s the suspicion of her paternalistic sister, Claire (Sarah Grace Wilson) who has jetted in from her job as a financial analyst. Claire wants to bring her back to Manhattan where Catherine can resume a life and, perhaps, get some psychiatric care.

Enter Hal (Cliff Burgess), a genial and attractive teacher with a bit of a reciprocal if unexpressed crush on Catherine. The former doctoral candidate under Robert is upstairs in the family’s deteriorating suburban home, rummaging through Robert’s insane musings in a hundred notebooks, looking for a scientific Holy Grail. And then Catherine tells him where to find it.

This précis fails to do justice to the web of relationships among living and dead people deft at negotiating intellectual obstacles in their professional lives, but who clumsily stumble and scrape each other’s raw nerve endings in their personal dealings.

The narrative arc is these people’s struggle to emerge from their world of the mind and make genuine emotional contact. The sole weakness of the script, if there is one, is that everyone doubts Catherine’s ability to fulfill her potential. Their ill-concealed condescension seems a little incredible, but without it, there’d be no plot.

Like many of Dramaworks’ productions, this is another impressive night of theater that makes you think. But it reminds us that stylistically, Dramaworks shows are rarely operatic or even cathartic. They’re not bloodless or lacking emotion, but they feel more cerebral than affecting. It’s rare that people exit a Dramaworks show in tears. This isn’t a criticism, just an observation, because no one else nearby has the cojones (and, arguably, the skill) to pull off Ionesco and Albee half as well.

Tanner is an experienced actress from northwest Florida (perhaps a few years well past Catherine’s 25) who has exuded hidden fragility in local performances such as Laura in New Theatre’s The Glass Menagerie. It’s a significant asset in making Catherine a sympathetic protagonist despite her isolating stoicism and reflexive rejection of any perceived attempt to curb her sovereignty. Her fear of inheriting her father’s mental curse and the human contact that might confirm it resides just behind those deer-in-the-headlights eyes, occasionally covered by a lock of hair that the preoccupied Catherine can’t be bothered to tie up. It’s a solid, nuanced performance.

What she lacks, no fault of hers, is the innate charisma that entrances us when she’s playing a character so clinically withdrawn and repressed. The long-running New York editions starred Mary Louise Parker who has that alchemical extra something that makes her captivating.

One element was missing, although perhaps a choice by Hayes. On Broadway, Parker and her successors Jennifer Jason Leigh and Anne Heche, all had a frisson of instability as if they could suddenly come at you with a kitchen knife. With them, the audience spent a decent amount of the play uncertain whether Catherine is, indeed, going or gone bonkers, to use the psychiatric term. With Tanner and Hayes’ rendition (and Gwyneth Paltrow in the lackluster film) you never doubt that Catherine is much maligned and misunderstood — psychologically wounded and emotionally stunted but sane. That scraps a key mystery that we won’t reveal here as well as robs us of sympathizing with her extended family’s loss of faith.

It’s terrific to have Kay back after his sojourn running a theater in North Carolina. His flashback scenes deliver a warm, gentle man whose paternal compassion for his daughter makes him seem familiar, even if Robert is an Einstein-class genius. Quietly but convincingly, without a shred of caricature, Kay gives us a three-dimensional character who seems as normal as the guy you borrowed the lawnmower from. Older patrons especially will relate to Kay/Robert’s musing during his coherent months that his best years are behind him.

While the entire evening chugs along smoothly, Tanner, Hayes and especially Kay  slingshot the quality to higher level in the second to last scene. In the flashback, the father has emerged from insanity for a few months and tells Catherine he is transfixed by the sudden return of his ability to reason out ground-breaking math theory. Tanner is fine here and the pair have had a reasonable amount of tamped down chemistry before this. But Kay comes alive with the fierce passion that can only be aroused in creative minds when they are engorged with the power of ideas snapping like electricity arcing across synapses. Tanner’s face is transfixed with hope that her father is completely well again and emotionally fulfilled – and not coincidentally freeing her to pursue her own education and future as a math theorist. It underscores how the most passionate moments of this play, intentionally, are when the three mathematicians are talking about their work.

Wilson, who was in Dramaworks’ Dinner with Friends, has the thankless role of the woman who would be the villain of the piece if Auburn wrote black and white characters. However, Wilson succeeds in making it clear that Claire loves her sister and wants to rescue her, even if her hyper-efficient, brisk lifestyle is anathema to Catherine’s soul. Wilson somehow makes it clear that she is biologically related to Catherine and Robert, yet has chosen to reject their ivory tower, in fact, contemptuous of their self-absorption that requires someone like her to pay the bills.

Burgess, who was so good as the angry prodigal in All My Sons early in Dramaworks’ season, creates a delightfully inept young man obsessed with the magic of his chosen vocation. But as Auburn wanted, Burgess’ Hal is not some dweeb from The Big Bang Theory, but a believable academic.

This is some of Hayes’ best work. Although it’s invisible to non-practitioners, Hayes’ labors are those of a craftsman like a fine cabinet maker. He has uncovered most of Auburn’s meanings, excavated them out of the souls of the cast and physically staged the chess pieces to further illustrate the relationships, such as the sisters sitting as far as they can from each other on a settee/glider. But especially impressive is the fluid, but rapid fire verbiage among these articulate characters. He has led his cast to create people not just uncomfortable in their own skins, but even more uncomfortable with each other. In his vision, these people are feeling their way around in the dark, well-meaning, but bruising each other whenever they attempt human interaction.

Michael Amico once again creates an almost photorealistic environment, this time the backyard of a modest home in a Chicago suburb, imbued with a dappled autumnal beauty by lighting designer Ron Burns and scored with a subtle soundscape of neighborhood noises by Rich Szczublewski.

And welcome back costume designer Erin Amico whose eye for fabrics and styles that communicate character is simply dead on. The best is Catherine’s slovenly clothing in the first scene: a well-worn flannel-checked shirt, faded pants, house slippers and an over-sized cardigan that likely belonged to her father. But the real grace note is the shapeless blue bathrobe she wears later on in the play, tied off with a brown belt from another robe altogether. This utilitarian combination speaks eloquently of Catherine’s depression and lack of concern for the corporeal world as opposed to the internal one.