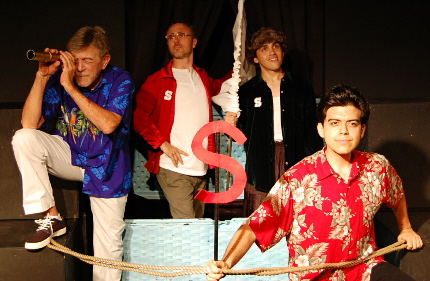 Jim Gibbons, Seth Trucks, Luis Herrera and Michael Mena whose ship is about to run aground in Evening Star’s production of The Comedy of Errors / Photo by Carol Kassie

Given the tragically premature death of director Laura Ruchala a week before the opening of Evening Star Productions’ The Comedy of Errors, it would have been too horrible to report that her final show was some well-intentioned but amateurish mess.

Fortunately, the truth without condescension or ceding unearned quarter is that Ruchala thoroughly succeeded in producing a rollicking ebullient edition of Shakespeare’s farce of mistaken identities.

The fledgling Evening Star troupe – a professional company that puts young adult actors alongside seasoned pros – has thrown themselves unreservedly into this madness along with the final polish in the last week or so by director Jerry Jensen.

But the star is truly Ruchala who lavished a hundred comedy bits and an imaginative vaudevillian sensibility that can be by turns subtle or silly. The bare-bones low-budget production ends with the cast delivering a joyful if ragged rendition of Ruchala’s favorite song, Pharrell Williams’ irresistibly infectious “Happy,” a perfect embodiment of this show.

To be honest, while this cast does better with Shakespearean verse than many South Florida casts, it remains a skill set that most of them need to work on – to the point that brushing up on the plot beforehand will help the audience. In fact, demanding Shakespeare aficionados will have no trouble finding fault with the overall production.

But then, they would be depriving themselves of the point of this edition with its contagious embrace of the groundlings-style midsummer night’s humor delivered by knockabout clowns.

Some bits sound bluntly broad and juvenile relating them on paper such as a Keystone Kops chase or having the money lender played as a loan shark who sounds exactly like Don Corleone. But the enthusiasm that Ruchala and the cast inject these bits with is winning.

Two small children playing police officers take a strapping hero to jail by clutching his legs as he strides away with them literally in tow. A man in lust actually hops after a young woman like a rutting rabbit. Tom Stoppard this ain’t.

The script was initially adapted by Ruchala’s friend Kevin Crawford, a co-founder of the outdoor Palm Beach Shakespeare Festival who died in December. She and Crawford’s brother, Todd, refined it further as a kind of tribute. While all the famous speeches are intact, the production injects numerous contemporary allusions and phrases including, “Yo!” In most productions, such additions seem clumsy attempts to make it accessible, but virtually every one works so well that Ol’ Will might have done the same if he was working today.

The framing premise is two children playing out the plot with dolls at bedtime. When they go to sleep and dream (an idea Crawford used in a 2008 production), actors emerge from a wicker toybox like a travelling commedia dell’arte troupe dressed in Jimmy Buffet garb.

From there, the production faithfully follows the travails of two sets of twins, master and servant, with the same names: Antipholus (both played by Seth Trucks) and their put-upon servant(s), Dromio (both played by Luis Herrera). They were separated at birth but have been thrown together by chance in the same city. They not only mistake each other for each other, but their problems multiply when they are misapprehended by one’s sexy spoiled wife Adriana (Joanna Mendel) as well as an ominous money lender, a goldsmith and several other players.

Any time in any production that the same people play the twins (much funnier than having four actors cast), it’s a logistical and acting challenge. First, they have to be distinct personalities. Trucks, among the better verse speakers in the cast, creates a perpetually bewildered visitor to this strange world in which people give him gold purses and invite him to dinner, as well as playing his local brother, a puffed-up playboy with a Jersey Shore attitude and considerable bling. Herrera plays the local Dromio as a competent, somewhat put upon functionary, but his visiting Dromio is a way, way over-the-top madman driven to the edge of insanity. While he chews the scenery like a dog with a new toy, he is undeniably hilarious.

The second challenge is how the director is going to handle the final scene when all four are in the same scene. (A version we saw at California Shakespeare ended up using life-sized mannequins operated by the two actors). We won’t give away what they do here, but it is inventive and cute.

Ruchala has the cast rushing around stopping only to freeze in an angular pose, manically waving their arms, doing double takes and otherwise mugging their audience with their mugs, giving everything a kinetic feel. Music is tossed in at every opportunity. In fact, when the heroes’ father, Aegeon (Greg Ward) explains his backstory to the Duke (the always wonderful Jim Gibbons) who has ordered his execution for landing on forbidden ground, Ward sings his long expository speech while playing a blues number on his guitar.

The entire cast exudes delight with grins that mirror Ruchala, who was famous for her own exuberant smile. The troupe includes Elaine Levin as Aemilia, the abbess; Samantha Streich as Luciana, the wife’s sister; Michael Mena as the outraged goldsmith Angelo, Sofia Manolesco as a pivotal courtesan, Lito Becerra as the Mafia-inspired loan shark and as a Caribbean witch doctor, plus Keara Sikich and Corwin Thargard as the dreaming children who pop up in several supernumerary roles.

This new troupe, an offshoot of Sol Children’s Theatre in Boca Raton, has a smaller budget than the last retirement party you attended even though they pay everyone something. But Ruchala, costume designer Briana Earhart, lighting designer Zack Novack, prop mistress Denise Scholle and many others make a virtue of that seemingly-thrown together ad hoc feel. They use Star Wars light saber toys as dueling epees and they put the money lender in a fedora and having him puff on a joke store doobie-sized stogie. 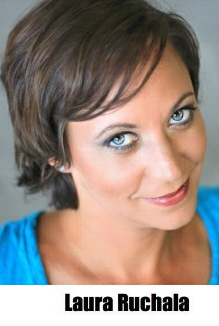 We didn’t intend to review the show; we went to do a story about how the company soldiered on after Ruchala’s passing. But producer Rosalie Grant said Ruchala would have wanted the work treated for what it is – a professional production. Grant said the only reason this production wasn’t Carbonell Award eligible was that it didn’t run enough performances; that will change with the next production next month, The Subject Was Roses.

Ruchala died a week after a brain aneurysm and a few days after her 36th birthday. She had performed mostly in Shakespearean productions, but had made a major impression last April in Outré Theatre Company’s production of Mr. Marmalade, a very dark comedy about a four-year-old who invents a disreputable imaginary friend played by Gibbons. She was memorable for her exuberance, electric smile and slighted demented look, what Gibbons called “Klieg light eyes.”

The Comedy of Errors was her first professional directorial assignment, although she had virtually every aspect planned out months ago and had staged most of the show before being stricken.

Her spirit is clearly infused in the production. In an interview, producer Rosalie Grant and Gibbons piled adjectives on top of each other to describe her. Grant said, “She was so vibrant.” Gibbons added, “Guileless is the word.” Grant: “She was, she is, was, always will be.”

While this summer lark of a production is a celebration of that spirit and love of theater, it is hard not to feel sorry for ourselves: It’s proof that South Florida audiences have lost a promising talent.