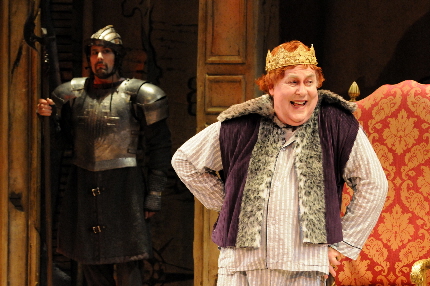 The word “hilarious” rarely applies to a bleak unblinking play about mortality, but Palm Beach Dramawork’s superb production of Eugene Ionesco’s Exit The King earns it, along with “profoundly thought-provoking” and other accolades.

Simply, it ranks among the best work that the company has mounted in its 13 seasons.

It’s true that watching a play about a man dying slowly makes audience members check their watches occasionally; it’s extremely difficult to keep engrossing a dramatic arc consisting of disintegration into the void. But the Dramaworks crew never allows it to become boring and the triumph of the evening overall is undeniable.

On one level, the 1962 play overhauled in 2007 by actor Geoffrey Rush and director Neil Armfield is about the inevitability of death and how badly human beings cope with imminent oblivion. But one level deeper, it chides human beings for squandering time and dribbling away the precious stuff of being alive. It calls us to live life as fully as possible every moment possible.

The story, set in a Lookinglass fairy tale kingdom gone to seed, posits that the dissolute but seemingly healthy 400-year-old King Berenger The First is informed by his first wife, Queen Marguerite, that he will die by the end of this play – 90 minutes hence. In this magical world in which royalty blithely commands Nature with a verbal order, his death is also an unavoidable certainty. It makes sense: the buffoonish Berenger has, through self-involvement and criminal neglect, allowed his war-ravaged world to deteriorate until every living thing is dying and the land is falling piecemeal into an abyss.

This is not a dystopia but the end of the world. Or at least the end of his world.  Because as Ionesco so thoroughly and masterfully illustrates, they are one and the same to the doomed. McPhillamy as Berenger is midway through the process when he stares out at the audience and issues forth a pathetic murmur, “ Me…. Me. Me. Me.”

The play charts Berenger’s death spiral — his psychological rationalizing and emotional writhing on the hook, helped and hindered by his court: the first wife, Marguerite (Radosh) who exudes a frayed, sad disappointment in Berenger’s previous refusal to acknowledge mortality; his mewling new trophy wife Queen Marie (Claire Brownell) who is totally dependent on him; his doctor/astrologer (Rob Donohoe); his remaining put-upon servant, the prole Juliette (Elizabeth Dimon), and the dim but loyal last remnant of his decimated army (Jim Ballard).

For the first half of the play, Hayes and company thread a playful, wacky vibe that embraces physical comedy, likely hundreds of humorous touches and such farcical set pieces as characters chasing each other under a strobe light like the flickering images of a Keystone Kops short. This is as daffy a tone as Dramaworks has ever attempted and it fully succeeds. Even before the curtain, Berenger mixes with the patrons in the lobby, handing out his portrait and later delivers a pre-show speech like a warm-up comic on The Tonight Show.

But as the reality of his fate sinks in and Berenger explores every stage of grief on his own behalf, the tone turns darker. The king bargains with an unknown power for more life, even if everyone else dies; he wants statues of him erected everywhere and his name to shine from history books. As the tone morphs, something even more magical happens: The vain and petty Berenger becomes pitiable in his helplessness, evoking our compassion if only in our recognition of our common plight.

And then an amazing transformation of tone occurs in the final scene – a stunning combination of brilliant acting, writing and direction worth the entire evening. Berenger has physically been slipping into an inert state, but his mind and spirit refuse to succumb. In the performance that will stick with you long after the house lights come up, Radosh gently and with inestimable compassion for a flawed and frightened being, she guides Berenger’s passage from life to death. Resembling a mother urging an infant to walk, she does the opposite, helping Berenger let go and find peace.

Praising Radosh whose regal imperiousness and disapproval for her husband turns into such care, is actually backing into a crucial facet of this success: McPhillamy. The New York-based actor has been a frequent visitor with such dramatic roles as physicist Nils Bohr in Dramaworks’ Copenhagen and philosopher Martin Heidegger in Promethean’s A Report on the Banality of Love.  But his rubbery, sad sack face always promised a talent for comedy.

McPhillamy creates a baggy pants clown whose bottomless bag of broad vaudevillian tricks makes palatable a king who is unredeemably selfish, self-centered, ineffectual, childish, petulant, even downright nasty – a Sears catalogue of human failings. With befuddled squinty eyes, gaping mouth and elastic body language reminiscent of Buster Keaton and Charlie Chaplin, McPhillamy conjures an Everyman who has undeservedly stumbled into the benefits of being king without accepting any of the responsibility. Echoing Peter Ustinov’s hapless creations, McPhillamy chews the scenery as if it was prime rib. Yet, somehow he makes you forgive and even empathize with Berenger as he works his way through denial and acceptance.

Obviously, these two performances had to be shaped by Hayes, much better known for his dramatic work, and Barkley, whose credits include director and choreographer of Florida Stage’s Backwards in High Heels. In three and a half weeks of rehearsal and months of work with the creative team, these two opened up a laboratory where the rest of the team could collaborate in experimentation. That has resulted in every aspect of this show being encrusted with comic filigree.

Michael Amico designed a delightfully decrepit throne room with lath peeking through cracked marble, wall-high maps of the shrinking kingdom and trumpets attached to the walls that swing down when heralding an arrival.

Leslye Menhouse’s costumes include long, long trains for the three royals, elegant appendages that exaggerate their sense of self-importance, but also get twisted up in disarray. She has garbed Berenger in a royal purple cape covering striped pajamas and argyle socks under his slippers.

The supporting cast is uniformly fine and each gets their own spotlit scene. A favorite has to be Ballard’s stenatorian guard who takes an introspective moment to admiringly enumerate the very long list of Berenger’s accomplishments, which range from inventing the wheelbarrow to being the real author of Shakespeare’s works. By reciting virtually every major achievement of all Mankind, Ionesco underscores how every effort is, in the end, worth dust in the eyes of someone who is dying.

This version was translated from French by Armfield and his producing partner, Rush, for two runs in Australia in 2007. They then moved it with Rush as the king to Broadway in 2009. Ionesco’s estate blessed this reimagining, which includes dozens of updated references. The script in turn gives some license to subsequent directors to insert tiny fillips such as Dramaworks’ adding mentions of Ipads and Google to the mix. All of this just emphasizes the timelessness and universality of the piece.

While this is much wilder than Dramaworks’ usual fare—even its rare comedies—it fits in with their mission of producing classic and modern plays that make you think. One of its critical triumphs, if not a universally popular hit, was its 2008 production of Ionesco’s The Chairs, a much tougher piece of surreal absurdism.

In a year in which there already has been an embarrassing wealth of don’t-miss productions such as Other Desert Cities, All New People, In The Heights, Lungs and Sideshow, this one soars to close to the top of the list. 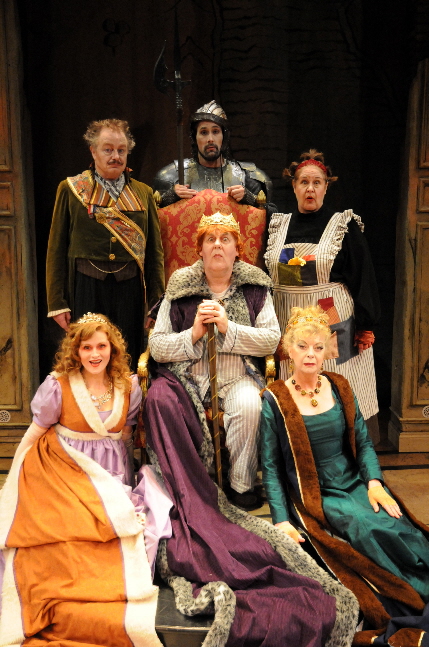