Outre’s The Violet Hour Is A Daring, Flawed Modern Medea 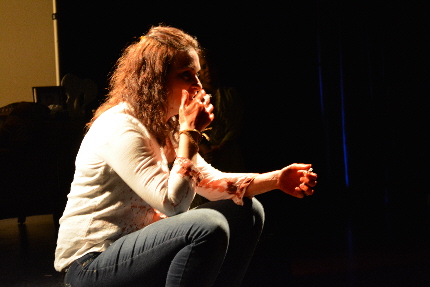 Sabrina Lynn Gore contemplates the horror she has wreaked as Medea in Outre Theatre Company’s The Violet Hour, A Modern Medea

Start by acknowledging that from its inception in 2011 few professional troupes in South Florida have taken or still take artistic risks with the courage, regularity, integrity and imagination that the well-named Outré Theatre Company invests in every production.

Sometimes the efforts work beautifully such as Back of the Throat, An Illiad and Thrill Me, sometimes not so well such as Bed and Sofa, and Othello.

Often, it’s both. The current world premiere of The Violet Hour, A Modern Medea falls in that category.

Oddly, the most un-credible aspect of the classic Medea myth – the immediate lead-up and subsequent murder of her son as revenge on her faithless husband – is the most believable facet of Outré’s reworking of the legend.

As Sabrina Lynn Gore’s betrayed wife moves closer and closer to stabbing her child, her outward steeliness and internal agony are perfectly plausible, as evidenced by the audience’s breathing becoming ever more shallow.

It’s the long build-up to the heavily foreshadowed inevitable that doesn’t land solidly in this ill-fitting mash-up of an elemental tale of feral vengeance transported to civilized modern times in which it seems too outsized to be credible.

Yes, we’ve all read horrifying headlines about parents who have killed their children and we’ve pondered what could press any sane person to such a point, even in the most extreme emotional distress. So the concept of local playwrights Shannon Ouelette and Skye Whitcomb was a stroke of brilliance.

But in execution, the oversized emotions and elevated language just don’t jive with people walking around in 21st century clothes chain smoking cigarettes. It is almost risible that a 21st Century Jason could think that his bogus rationalizations – protecting his son and wife from poverty – would be bought by anyone, least of all Medea. Similarly, the playwrights have said that their Medea acts more out of concern for the boy’s bleak future than to spite her husband. But while their Medea says those words, they aren’t terribly convincing. All this might work for Euripides in 431 B.C. but not in the present.

The key is that The Violet Hour is not a translation of Euripides’ classic using modern dress to underscore the timelessness of the themes like Richard Burton’s Hamlet. It’s a modern retelling in conspicuously heightened but contemporary verbiage written by the playwrights in which kings and courtiers sometimes speak in stately lugubrious tones, sometimes in prosaic vernacular peppered with obscenities.

The actors under Whitcomb’s direction work hard to find the groove. But it’s only in last ten minutes of a seventy-minute production that Gore’s proven acting chops, Whitcomb’s staging concepts and some imaginative lighting by Julia LaVault combine into a harrowing truthfulness that is unnerving.

Before that, the jarring friction from the warring factions of style — plus a downright languid pace for most of the evening — undercut any tension.

Yet Whitcomb and company grace it with intriguing touches such as a mournful cello playing softly (a little too softly) through much of the play. He and Ouelette deliver ingenious analogs such as a Greek chorus made up of well-heeled matrons en route to Jason’s wedding, a kind of Real Housewives of Corinth County who can dish the Medea scandal with relish and yet murmur eerie Greek incantations from the edges of the auditorium.

But some ideas don’t work well. The first long scene is a drunken nurse’s monologue to set up the exposition. Medea, who dramaturgically ought to be present from the get go, is offstage complaining into a phone. Unfortunately, whatever she’s saying cannot be clearly heard by the left two-thirds of the auditorium, so the idea of having her present but not present doesn’t land.

A quick refresher from Greek Theater 101: Medea is a barbarian princess who fell in love with an invading soldier Jason (Tim Gore), fresh off his recovery of the Golden Fleece. She betrays her family, even bloodily sacrifices her brother, as the couple escape to Jason’s homeland.

But Jason is ambitious and eventually jettisons this foreigner to marry the daughter of King Kreon (Jim Gibbons). Outraged at the betrayal, Medea puts up a very public stink on the wedding day. Kreon reacts by ordering Medea into exile with Jason’s acquiescence. With nothing to lose and engorged with fury, Medea undertakes horrific acts of revenge including poisoning the wife-to-be and Kreon.

None of that is enough. She and Jason have a five-year-old (Nathanael Schultz) who she unreservedly adores and who Jason prizes, although he is willing to send the boy into exile with Medea. What will destroy Jason, Medea knows, is to murder the boy.

She says, “Everything Jason does, he does for him. He is the sun that lights Jason’s world. And I will plunge him into darkness. The son that I bore him in the agony of love, the boy I gave him, I will take from him. Take from him forever. No one will ever say that I sat by, weak and timid and afraid to do what must be done. I will take back my life. My life.”

She justifies the act as shielding the boy from a terrible future. She says to let him live would mean, “So he can grow up to hate me? To be a pawn in the power struggles here, or to starve with me on the streets? He can’t, I can’t let my boy hate me. I can’t let him hurt.”

But that doesn’t wash since Medea manipulates the players so that the royal couple will adopt the child, a ploy just to make the planned tragedy even more painful to Jason. Further, these playwrights and Euripides made one debatable dramaturgical decision: Medea gets away with it and escapes, although obviously her future is shattered.

Sabrina Lynn Gore rips passions out of her insides and then imprisons them in nearly impenetrable steel. She has to start the play pole-axed by the betrayal yet clearly in the throes of emotional agony. Then she has to work her way through an array of emotional states until her fury becomes intense enough for us to believe she would slaughter her beloved child with a knife.

Other cast members are less successful, although they gamely wrestle with the material including Beverly Blanchette as the nurse, Jovon Jacobs as Jason’s aide, and the pearls-and-earrings Greek chorus of Liz Dikinson, Rachel Finley, Sandi Stock, Daryl Fortson and the imperious Kitt Marsh.

The earnestness of the project reflects months and months of work by Ouelette and Whitcomb who took their title from the passages in T.S. Elliot’s poem The Wasteland, a phrase referencing the moment of dusk when the sunset turns the sky the color of sadness. Still, there is not a company in the region who would have even attempted it and honor must be paid.

The Violet Hour, A Modern Medea from Outré Theatre Company runs through March 27 at the Abdo River Room at the Broward Center for the Performing Arts, 201 SW Fifth Ave., Fort Lauderdale. Performances at 8 p.m. Friday-Saturday, 2 p.m. Sunday. Running time 1 hour 10 minutes with no intermission. Food and drink can be bought at least a half-hour before the show. Tickets available by calling (954) 462-0222 or visit browardcenter.org