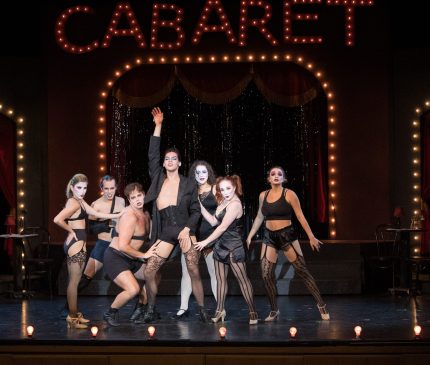 PPTOPA’s earnest, merely passable production of Cabaret is notable for a few solid performances, but especially for the resonating script by Joe Masteroff which, decade after decade, becomes an increasingly relevant warning.

Even more than the original short stories, Masteroff’s 1966 “book” warns of an everyday populace willing to accommodate the rise of a totalitarian regime that promises answers, even to the point of self-inflicted blindness to its dangers. It’s the primary reason to “come to the Cabaret” although most theater fans have seen it once or twice or at least the Fosse film.

Listen to characters in denial say, “Governments come, governments go,” or the boardinghouse operator defending herself compromises, “These (Nazis) are my friends and neighbors” or the Jew saying, “It will pass … because I understand the Germans. After all, what am I? A German.” Or in the end when a heroine asks, “What’s politics got to do with me?” the hero answers, “If you’re not against all this, you’re for it, or you might as well be.”

Indeed, an outstanding moment in Pembroke Pines Theatre of the Performing Arts’s production belongs to Masteroff: The fledgling Nazis at the engagement party join in one by one to croon the deceptively pastoral “Tomorrow Belongs to Me” until it crescendos into a rousing nationalistic marching anthem that is chilling — not just in context of the musical’s narrative but simply by remembering last night’s network news.

You know the plot:  American writer Clifford Bradshaw unable to start a second book comes to Berlin near the end of the Weimar Republic awash in decadence. He links up with the fourth-rate English showgirl Sally Bowles as the emergence of Nazism rises to drown them all.

The other unassailably praise-worthy section of the production – and this is a surprise – is the perfectly rendered title number by Gaby Tortoledo with the direction of Jeffrey Bruce and musical direction by Jesse Veliz.

Very few actresses, directors or productions I’ve seen – and I’ve seen many — get Kander & Ebb’s classic number right. It was never meant to be a joyful roof-raising paean to living life fully; it was never meant to be taken at the face value of the lyrics. The title song is not some brave defiance against cruel realities or a celebration of hedonism as its used in a thousand karaoke bars, revues and lounge acts.

Sally is trying to justify her choices with a philosophy that even she knows is a lie. She has just had an abortion to avoid the responsibility, she won’t leave Berlin with her lover who rejects this nightmare, the world around her is disintegrating and she realizes at some level that her future is a doomed tragedy. The song is a self-centered, self-destructive person’s single-minded attempt to shut out the horrors of the world by partying until Armageddon. Sound like South Beach?

But Tortoledo completely nails the moment without overacting: Sally barely holding together amid the fear and pain seeping out; her face, body and voice desperately grasping at what she knows is a fatally flawed life preserver. Tortoledo, Bruce and Veliz deserve high praise for honoring the spirit of the moment rather than satisfying people in the audience hoping to sing along with a standard.

Tortoledo is a talented up-and-coming ingenue last seen as the chief dreamer in Theatre Lab’s The Impracticality of Modern-Day Mastodons and Antonia in MNM’s Man of La Mancha. She was hampered opening night by a crackling microphone and sound balancing problems that affected the entire show as a whole. But she dove deeply into the difficult role of the offbeat, effervescent party girl, and her performance deepened as the plot evolved.

The evening ratcheted up on all fronts when Tortoledo, wearing a strange brunette wig of shoulder-length Shirley Temple curls and bangs, sings the provocative “Mein Herr,” one of the two songs transferred from the 1972 film.  And she breaks hearts in the other film-based song, the first time we see Sally without a protective mask, “Maybe This Time.”

Other work deserving of kudos: Colleen Pagano’s uber-practical boarding house operator Fraulein Schneider is disturbingly familiar (your neighbor or the fella in the mirror) whose world-weariness comes through her fine voice in “So What?” and the bitter resignation of “What Would You Do?”

Karen Cohen as the hooker Fraulein Kost exercises a solid singing voice in the opening of “Tomorrow Belongs To Me” but also in the tender German version of the love song “Married.”

And then, of course, there is New World grad Pablo Pernia as the Emcee. Keep in mind that Alan Cumming’s sleaze-filled version in Sam Mendes’ 1993 reinvention hailed from an entire other universe from Joel Grey’s merely leeringly lewd original. Pernia’s significantly younger and better-looking Emcee has a swagger and style in sheer thigh-high stockings, sparkle-speckled nipples, toothy grin lined with lipstick and other accoutrements. His Emcee clearly savors the omni-sexual excess of his character and he energetically interacts with the audience, whipping them up to applaud. He echoes critic Walter Kerr’s description of Grey’s Emcee: “Cheerful, charming, soulless and conspiratorially wicked.”

Yet, as an actor, Pernia does not actually come across as the Emcee character himself, but more like a boy band member playing dress up for Halloween. Still, he will be someone to watch in coming years.

Others in the cast include Geoffrey Mergele as an unengaging wishy-washy shoulder-shrugging Cliff who only comes alive as a leading character two-thirds of the way through the show; Christopher Dreeson as Schneider’s amiable, likable suitor Herr Schultz, a grocer who is Jewish; and Rick Prada as the embryonic Nazi Ernst seeking to embroil Cliff in Nazi affairs.

The ensemble is not outstanding but competent. Still, Bruce has wisely cast a wide variety of faces and body types to underscore both the decadence of the Kit Kat crew as well as the universality of the populace on trial here: Sarah Gorfinkel, Lito Becerra, Meagan Nagy, Gabriella Giardina, Bob Ruggles, Anna Cappelli and John Henry Parks.

Everyone is invested 100 percent of the time in performing to the strong digitized music. The choreography by Del Marrero is adequate – the Kit Kat Club chorus line is not supposed to be as agile or engaging as those in A Chorus Line. There is a lot of predictable none-too-precise butt-spanking, thigh-slapping, pelvis-pumping, wide-open-legged crouching. A lot. Defensibly in character.

But aspects are lacking throughout the evening: The entire production feels like it’s just “not quite there,” like you’re seeing it through one of those translucent cloth scenery drops called a scrim. In the non-Kit Kat Club musical numbers as well as the book scenes, most of the time people just stand around and talk or sing ballads in static tableaus. Absent throughout is a sense of closing menace or debauchery (butt-slapping notwithstanding), no sense of the moral fiber of the world disintegrating other than the inherently brilliant material by Masteroff, Kander, Ebb and original director Harold Prince.

This marks the first show since the death of former theater leader Alvin Entin, chairman of the theater’s board and sometime actor. The company’s season is dedicated to his memory.

Cabaret by the Pembroke Pines Theatre of the Performing Arts plays through Nov. 7 at the Susan B. Katz Theater of the Performing Arts at the River of Grass ArtsPark, 17195 Sheridan Street. Performances 8 p.m. Friday-Saturday, 2 p.m. Saturday-Sunday. Running time 2 ½ hours including 20-minute intermission. Tickets generally $17-$34. For more information visit www.pptopa.com or call (954) 437-4884.

COVID PROTOCOL: Masks required inside the lobby and the auditorium. No cash transactions at the box office. No paper playbills, it’s available by scanning a QR app on a poster in the lobby. Food and drink available on outside patio. Social distancing inside auditorium. No post-show meet and greet with the cast.