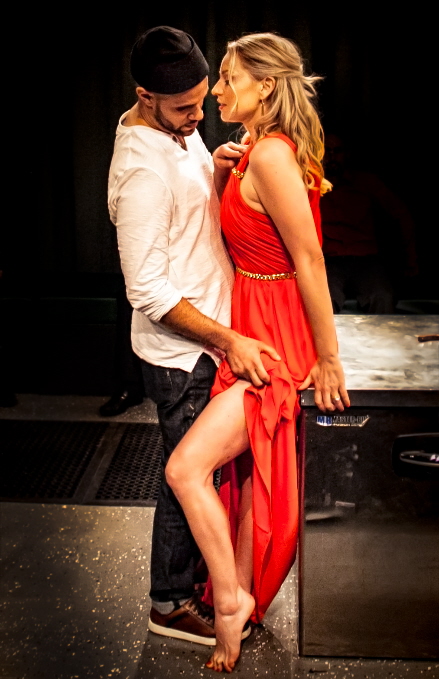 Amid the rise of the #metoo movement, the surprise in the new play Queen of Basel, subtitled “Or an unapologetic response to Strindberg’s Miss Julie,” is just how closely this modern-day riff still echoes the sadly timeless themes of the 1888 original.

Hilary Bettis’ script, directed at Miami New Drama (MiND) by Michel Hausmann, does expand and dig deeper into Strindberg’s naturalistic examination of a war between the sexes mingled with a war of economic class distinctions.

Erasing Strindberg’s maddening misogyny, Bettis gifts Julie with hard-won marketable business skills and aspirations to use those skills for philanthropic purposes, and it gives servant Christine a dark deeper backstory. All, including the triangle’s fulcrum John, are more complex, mercurial, and, frankly, more self-centered and deceitful than Strindberg’s prototypes. As a result the play ends not with Julie’s quiet retreat offstage into likely suicide with a razor per Strindberg; it ends with, literally, a blood-stained devastation of emotions, bodies and even the setting of a SoBe hotel kitchen.

Yet, set during a trendiest of trendy galas at Art Basel in Miami Beach attended by only the most elite of the elite, Bettis’ Julie remains a pampered self-absorbed one percenter. John and Christine are still blue-collar strivers looking at this spoiled deb across an abyss of economics and a surprisingly tenacious caste system.

The basic paradigm remains of a push-pull power struggle in a male-female relationship employing every weapon available from lust to money, with threats to both parties’ reputations. The result in MiND’s production is a measured circling tarantella with a distinctly contemporary Miami vibe that ends in shattering desolation.

The script stumbles over a few logical bumps that are forgotten by the audience as the plot drives forward. But the lasting shortcoming is that the characters’ crucial gear shift deep into the second act doesn’t seem justified by everything they had said and done before. One moment they are lost in idyllic reveries of a dreamed future. Then with one sentence and an obscene retort, both reveal hateful inexcusable lying personas that were not hinted at previously. Their abrupt turns are theoretically defensible but not credible.

This marks the first fully-staged professional production of the work. MiND commissioned the piece and helped develop it over two years with Bettis, an up-and-coming playwright penning theater works, but who has been paying the bills as a writer on FX’s television series The Americans. But in the deceptive cheat occurring all too frequently these days in non-profit theater, the “world premiere” tag so valuable for marketing purposes officially will go to a production at the more prestigious and high profile Washington, D.C., Studio Theatre next season.

Strindberg’s play was in the vanguard of its time with its blunt sexuality, its strong-willed manipulative heroine and its commitment to a new wave of naturalism. But in subsequent enlightened decades, generations may respect the original but find its off-putting misogynism decimates its relevance for some audience members, academics and social observers. With deft skill, Bettis erases all vestiges of that flaw while acknowledging Julie’s deep character flaws and conflicted ambivalence.

Julie says to John, “Everything. I want that. The fairy tale. The happily ever after with the love of my life. And babies. All women want that. We have to pretend we don’t. But I would give it all up for something real…. Those women you drive home from the clubs (pretend). Men make the rules. They want the fantasy so you have to be the fantasy. They want freedom so you have to pretend like marriage and loyalty and commitment are outdated. They want to feel strong so you pretend like the groceries are too heavy. They want to feel smart so you pretend like your ideas are their ideas. You hand it to them. And they take all the credit. And you shrug and smile and look pretty at cocktail parties so their friends will tell them what a trophy you are. It’s all a fucking lie, all of it. But we have to pretend like we’re less so men won’t be too intimidated to love us.”

A quick recap of the plot whose analog to Strindberg is apparent. Julie (Betsy Graver) is a South Beach coke-sniffing socialite, the daughter of a powerful real estate mogul. Decidedly drunk, she escapes the horde of paparazzi at an Art Basel gala after she has broken off her engagement. Looking like a gorgeous Greek goddess in an elegant crimson dress, she flees into an abandoned kitchen in her father’s hotel along with a new family employee, Christine (Daniela Bascopé), recently arrived from Venezuela.

Christine summons her fiancé John (Rudi Goblen), an Afro-Cuban Uber driver, to take Julie home. Julie refuses to go with him and when his double-parked car is towed, they are stuck together while Christine serves cocktails at the party.  Over time, they tell each other about their lives – John is studying HVAC and has a decent knowledge of fine wines; Julie is a quarter Colombian and proud of her heritage. They poke at each other, pushing each other’s buttons.

A verbal pas de deux ensues in which sex, money, class and a half-dozen other facets are used by the pair in skirmishes to dominate each other. As with Strindberg’s plot, the dance leads to rough intercourse, but just as they daydream about a life together, the dance turns into a nightmare.

What all three want is not really sex, money or anything else being dangled. What each wants is freedom from social restrictions, conventions and expectations,

The Venezuelan aspect of the story embodied in Christine’s second-act aria about her hidden past stems in part from Hausmann and Bascopé originally hailing from that country. Christine relates a horrifying story of the political-economic insanity that the country has become. It gives Christine considerably more depth, although what that actually has to do with the plot was not immediately clear, other than give her dimension.

Hausmann steadily propels the evening along without hurry. He lets the narrative breathe, especially in the first act closing scene when Christine finds the kitchen empty, spots the empty wine bottle and hundred dollar bills on the floor, and then decides to take retaliatory action.

Hausmann has elicited persuasive performances, but he wisely hired a fine cast to work with. Graver has been involved with the project since an early reading and she smoothly slips into the skin of this complicated, troubled and deeply flawed woman. Her Julie, impassioned nearly to the point of madness, joins an outstanding array of roles including the enigmatic visitor in Venus in Fur at GableStage to the wife in Arts Garage’s tour de force Lungs to the lost survivor in GableStage’s Blasted.  She succeeds in the difficult task of making Julie both someone whom an audience can feel compassion for and disgust for at the same time.

Goblen is an actor-writer-dancer who has worked in recent years with multi-discipline projects across the county, notably some based in movement as much as dialogue. But his acting here is unassailably solid giving John a strength, intelligence and pragmatism rooted in a novel’s worth of adversities endemic to his socio-economic group.

Bascopé invests a quiet strength and internal dignity even as she must babysit Julie in the early scenes, but whose penultimate tale unleashes the pent-up anger of her own loss and her resentment toward people like Julie who, unlike her, cannot conquer their troubles.

All of them easily deliver Bettis’ perfectly-observed contemporary dialogue that isn’t flowery yet manages to elicit an emotional responses from the audience.

A second problem is that John and Christine often converse in Spanish with some English interpolations. Goblen and Bascopé are strong enough actors that Anglos can decipher a flavor of the conversation from their tone, but the precise meaning can be lost.

The audience sits not in the 417-seat auditorium at the Colony Theatre that MiND manages on Lincoln Road, but in 99 seats surrounding an elongated narrow playing area across the stage itself – a technique frequently used by the now defunct Miami Theatre Center’s productions of its adult shows such as Hedda Gabler. Tip: Ask for tickets in zones where they have seat backs.

In its short life at the Colony Theatre, MiND has been pushing hard at the boundaries of mainstream expectations while still seeking a wide audience. With its Basel setting and Gen-X protagonists from wildly divergent backgrounds, Queen strongly embodies MiND’s commitment to reflecting the unique social, economic and multi-cultural environment that is Miami, down to having John speak a Cuban slang-inflected Spanish to Christine speaking a Venezuelan from of Spanish.