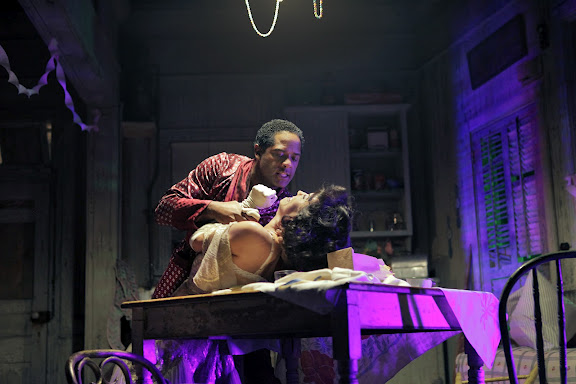 In playwriting class, they advise you to figure out whose story is being told and then ensure that they are the focus of the narrative arc. There’s no doubt that Tennessee William’s classic drama belongs to Blanche DuBois and, by extension, the actress playing her.

But the play cannot fully succeed without a strong antagonist in Stanley Kowalski and that’s where many productions fall down. Not in this new African-American edition directed by Emily Mann.

As unassailable as television actress Nicole Ari Parker is as the wounded Southern belle, the entire production leaps like it was hit with a cattle prod every time Blair Underwood erupts into a scene.

Cliches come to mind only because they are so precisely accurate here: Underwood has the speed, grace and feral blitheness of a panther. Mann has him enter a room throwing his clothes in a ball in a corner, slamming open doors and taking complete ownership of the room. Ironically, his charisma and fine acting chops underscore how comparatively little Underwood seems to have to do.

For Mann, this play wheels around Blanche like the Big Dipper turns around the North Star.  Parker’s Blanche flails her arms as if she was looking for a life preserver or even the silhouette of a ship on the horizon. She creates someone whose chronic self-delusion is only a way to preserve her life-sustaining pride; she is completely conscious that she acting as she wishes things were, not what they are or have been. She rarely looks directly at anyone as if fearing the visual element of human interaction would confirm that she’s not living in genteel environs anymore.

The sexual conflict doesn’t feel as inevitable as Stanley says it is just before the rape. But there is an unavoidable collision coming from the opening “meeting” because Mann and the actors create two people whose shared ruling passion is preserving their own deceptively endangered pride – and neither can survive the other’s existence.

The real star of the show is Mann whose vision of a multi-ethnic down-at-the-heels French Quarter is so perfectly realized that it never feels false for a moment. The travails of blue collar poverty have bonded African Americans, Creoles, Hispanics and whites in an unusually egalitarian neighborhood where poker games and back-porch interaction know no color line. It’s not the ethnicity, but something about this feels different, like a skilled crooner putting a slightly different spin on a familiar standard.

Mann has made very few changes to the text to accommodate the racial changeover (the name Kowalski is never heard). In fact, Williams’ poetic dialogue sounds perfectly authentic in these actors’ mouths. Mann  has been mulling over such a production for many years, but was intrigued by the African-American production of Cat On A Hot Tin Roof  that was produced by the same man she enlisted, Stephen Byrd.

Mann, the artistic director at the McCarter Theatre Center who directed the Broadway version of  Nilo Cruz’s Anna in the Tropics, has a sure hand in the directorial basics of pacing and staging, but also for inventive grace notes. They can be as tiny as Blanche wiping off a pencil that Stanley probably used, to vignettes of community life including a jazz funeral that fill the time as the set is-redressed between scene changes.

She also has done a pretty solid job in casting. Mitch is played by Wood Harris, best known as the stone-cold drug kingpin Avon Barksdale in HBO’s television masterpiece The Wire. Despite having limited theater experience, the tall, lanky actor convincingly portrays an affable, loose-limbed suitor and pal who never seems like the Mama’s boy that most actors interpret him as.

Daphne Rubin-Vega, best known as Mimi in Rent and the Broadway production of Anna in the Tropics, satisfactorily renders Stella and even makes credible the emotional as well as physical connection of a well-bred lady to a man she’d likely have ignored in her youth.

Rubin-Vega only falls a shade short when Williams asks her to deal with the aftermath of the rape. It’s almost an impossible assignment when Stella seemingly refuses to believe her sister’s account because Stella so desperately needs to be with Stanley. In the best performances, Stella also must wonder deep down whether she is betraying her sister and will likely wonder for the rest of her life what kind of man she has chosen.

Eugene Lee, one of the deans of modern set design (ranging from Wicked to Saturday Night Live) has once again created a gloriously evocative and intricately detailed environment. The Kowalskis’ two-room apartment and the glimpses of the community surrounding them are as dilapidated as Belle Reve must be. Paul Tazewell’s costumes are period perfect and say volumes about the characters. He even puts Stanley’s Army jacket in a closet, recognizing that Stanley takes great pride in that part of his past life. But a real triumph, overlooked by the Tony nominators, is Edward Pierce creating myriad moods simply by morphing the light, everything from a honey-colored sunset to that harsh bedroom light that pitilessly exposes the truth.

2 Responses to Report from New York City: Catch This Streetcar