Report From New York: ‘It’s Only A Play’ High And Inside Baseball 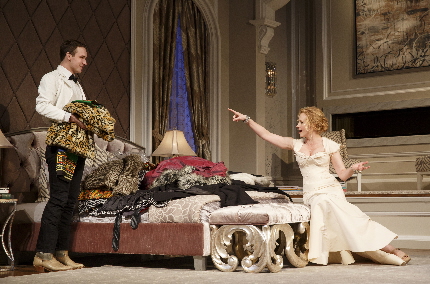 #1 Name the five quarterbacks drafted ahead of Dan Marino.

#2 What two former Cardinals never played for or managed the Yankees, but are honored with plaques at Yankee Stadium?

#3 Leonard Bernstein was hired to write incidental music for a play in 1952. Even though the two leads could not sing, he went overboard and composed almost a full score to be sung. What was the show?

It’s all inside baseball. The answers don’t matter to most people (but they are at the bottom of this story).

And it perfectly describes a wry and witty Broadway offering, It’s Only A Play, if you’re one of us who can name all six shows that earned Tony nominations for Kelli O’Hara. But if you’re one of the tens of millions who can’t, you aren’t going to get a tenth of the potential pleasure out of this overhauled, updated revival of Terrence McNally’s 1982 paean to the glorious narcissistic and divine misfits who populate theater.

Any comedy written by McNally, starring the inspired Nathan Lane and directed by Jack O’Brien (Hairspray among other things) cannot be a failure. The jokes are pitched high and fast and quick as if there was a batting practice machine lobbing them at you like a machine gun. Any New York crowd is nearly guaranteed to adore this self-validating ode to the fragile hothouse egos comprising the bullpen of the theatrical profession. After all, the chief butt of the nastiest jokes are theater critics. Of course, it’s indicative that you have to know that Ben Brantley is the chief critic of The New York Times and appreciate its alleged life-or-death power to realize why many of the jokes are funny.

Truth be told, this play goes on at least a half-hour too long and even the skilled clowns on stage can’t keep it bubbling forever, especially since the last few scenes drag and the last scene is absolute nonsense, mechanically attached with baling wire.

The set up: A first-time Broadway producer, Julia Budder (Miami’s Katie Finneran) is hosting the opening night party for The Golden Egg at her tony Manhattan townhouse. Downstairs initially out of sight are the playwright Peter Austin (Matthew Broderick); Frank Finger, the wigged out glam British director (T.R. Knight); Virginia Noyes, (Stockard Channing) the lead actress addicted to various pharmaceuticals; Ira Drew (F. Murray Abraham), the nastiest critic in town who apparently has the night off, and others awaiting the late-night reviews.

Upstairs in a luxurious bedroom, we meet James Wicker (Lane), a stage actor who turned down a part in The Golden Egg to continue making a lucrative living in a TV sitcom, causing estrangement with his buddy Peter. Making regular visits to the bedroom is Gus (Tony-nominated newcomer Micah Stock) as a wannabe actor hired to store guests’ coats on the hostess’ bed.

Eventually, everyone ends up in the bedroom after each makes applause-magnet grand entrances. No one actually says, “Fasten your seatbelts; it’s going to be a bumpy night,” but you think they do.

Fueled by alcohol, pills and angst in overdrive, these overheated stereotypes spin at a tornadic 8000 rpm with the kind of delightful sniping we expect. No one is spared, but the chief villains are venal, insensitive, taste-deprived theater critics.

McNally has jammed the script with literally hundreds of inside jokes, often referencing an unending parade of bold-face Page Six names. Some are obvious to any theatergoer such as Gus dropping on the bed the coats of celebs and cast members: a long, long fur coat belongs to Tommy Tune, a plastic bubble outfit is Lady Gaga’s, and raiments are piled up for guests visiting from seemingly every show from Rock of Ages to The Lion King. It’s a genuinely cute bit the first five times of twelve it’s used.

Indulging in meta self-referential humor, Wicker/Lane is asked how he liked The Golden Egg and he replies, “What do I know? I liked The Addams Family.”

Others jokes are even too inside baseball for a world-class theater nerd like myself: There was some running joke about Lane complaining about being replaced in some show by Harvey Fierstein because Lane wasn’t as masculine as Harvey.

We’re being tougher on this than it deserves. It is filled with great one-liners, delivered with acid cattiness. The diva says, “I do a lot of self destructive things. But no television.” Or when someone tells Wicker,” “If you don’t come down, you won’t hear Liza sing.” To which Lane shoots back with faux incredulousness, “You mean she might not?”

The play’s run has been bolstered by the star power and bottomless comedic talent of Lane who has single-handedly kept several theater ventures afloat such as the aforementioned misbegotten The Addams Family. We’ve never seen him give even a mediocre performance, even when the material wasn’t worthy of him. And his rendition of Hickey at the Goodman Theatre’s The Iceman Cometh in Chicago in 2012 (and revived this season at the Brooklyn Academy of Music) remains one of the finest performances in my memory book, no asterisks.

Other than the eternally arch and always present Lane, only Finneran and Knight seemed to be working the night we saw it. Channing, a brilliant actress as proven by her turn in Other Desert Cities, seemed to be in a dull haze like her drug-addicted character. Broderick, clearly a very nice guy, phoned in his patented bemused performance and was on the verge of cracking up with laughter onstage much of the evening.

For mainlining mainstream theater, It’s Only A Play is a qualified hoot – quite funny much of the time, not as funny as it thinks it is some of the time. This revival has been playing since August and closes in a few weeks. As recently as yesterday, I would have sworn that it wouldn’t have a future life 30 miles outside Times Square. (Will that Addams Family joke work if anyone but Lane says it?) But GableStage has it penciled in for their next season. I will be disappointed if I am not eviscerated by name.

By the way the answers to the above questions are #1 John Elway, Todd Blackledge, Jim Kelly, Tony Eason, Ken O’Brien; #2: Popes Paul VI and John Paul II, who held Masses there, and #3 Peter Pan (not the Mary Martin version).

One Response to Report From New York: ‘It’s Only A Play’ High And Inside Baseball