Report From New York: Be Glad To Have Kristin Chenoweth Aboard On The 20th Century 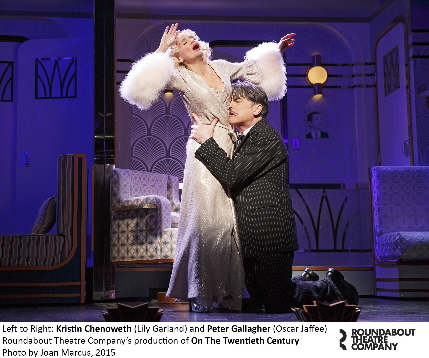 This critic takes a back seat to no one in his admiration of regional theater and has often put South Florida theaters at the top of their game up against nearly anyone. But there is at least one thing that mainstream Broadway does better than anyone anywhere in the world: the big budget, kick out the jams, glittering blockbuster.

Mainstem producers can tap multi-million-dollar budgets, nearly a century of accumulated showmanship in the genre, and the deepest and broadest talent pool in the English-speaking world. Oh, and they have Kristin Chenoweth.

Witness the current production of On The 20th Century from the Roundabout Theatre Company – an amalgam of all those blessings and more.

From the tap dancing porters to luggage thrown through the air to the scenery-chewing hero entering through the open window of a speeding train out of an Art Deco dream, On The 20th Century is a lavishly mounted and detailed encrusted production that is a vaudevillian joy from start to finish.

It needs all those gifts – especially the inestimable Ms. Chenoweth and indefatigable director Scott Ellis — because, truthfully, there are reasons this 1978 musical hasn’t been revived before and hasn’t been done all that often anywhere. The script and score are a classically crafted work that affectionately lampoon yet pay painstaking homage to 1920s stage musicals and 1930s movie musicals. But there’s a stale feeling just below the surface of having seen this premise one time too many and it takes every ounce of skill these practitioners have to make this as inarguably hilarious as it is.

The intentional pastiche of earlier plays and movies tracks the efforts of the washed-up but devastatingly handsome king of Broadway, director-producer Oscar Jaffee, to stage a comeback.

Just getting out of Chicago ahead of his creditors, Oscar (Peter Gallagher) and his boozy minions (Mark-Linn Baker and Michael McGrath) board the luxurious 20th Century Limited en route to New York. The never-say-die Oscar is plotting to inveigle his former protégé and lover Lily Garland (Chenoweth) to abandon her “sniff, sniff” film career and return to a Broadway show he needs her to headline, even though he has no idea what it will be when the curtain rises.

He has arranged to be berthed on the train alongside Garland and her current beau, her muscle-bound not-too-bright leading man in film, Bruce (Andy Karl). To spice things up, the passenger list includes a looney old evangelical heiress (Mary Louise Wilson) whose presence holds out hope of financing Oscar’s sudden brainstorm for Lily – a recreation of the Mary Magdalene saga.

Of course, there are surprises and reversals that you can see coming several stations ahead – which is part of the appeal – as Oscar schemes and Lily resists on the 16-hour trip to New York. It’s all intentionally way the hell over the top and everyone involved throws themselves into it with utter abandon. Ellis creates precisely the right tone like a Busby Berkley musical if it was directed by screwball comedy king Preston Sturges.

Like Something Rotten, there really are only a couple of basic hoary jokes here about the vanity and indomitability of show folk. It must be carried for two hours on the backs of a tirelessly energetic and inventive cast, ensemble, director, choreographer, crew and design team. Granted, the score is by the legendary Cy Coleman and the words by Betty Comden and Adolph Green. But without these folks at the Roundabout, this show would probably not be half as enchanting.

Obviously, you have to start with Chenoweth who is about as reliable as a hand as you can get on Broadway other than Nathan Lane. You never know how much of a performance is the actress and how much is the director, but her rara avis persona here as a daffy but not at all dumb diva is a perfect fit (as opposed to her role in Promises, Promises a few season back). Her clowning is not limited just to rolling eyes and dramatic posing but how she employs her operatic trill with the same rubbery facility as her facial expressions. We’re rooting for Kelli O’Hara to win her long-delayed Tony Award for The King and I because she got robbed for The Bridges of Madison County last year. But the truth is that Chenoweth probably deserves it for this “tour de farce.”

While Chenoweth gets the spotlight, most of the rest of the cast is step for step working at the same level. Gallagher, a former steamy screen idol (Remember The Idolmaker?) still looks pretty hunky and he still sings as well as he did as Sky Masterson in the 1992 Guys and Dolls revival. Eschewing any vanity as an actor, Gallagher creates an Oscar who is an all the stops out ham living larger than life even without a penny in his pocket. He even affects that faux-cultured accent of some plummy British actor who probably comes from the slums of London, or Cleveland.

No one connected to the show breaks faith or winks directly at the audience, but every facet is in on the joke from Ellis’ staging to Warren Carlyle’s rousing choreography to Kevin Stiles’ finely calibrated musical direction to William Ivey Long’s note-perfect costumes to David Rockwell’s gleaming chrome Art Deco settings to Donald Holder’s lighting that never stays the same for more than a minute although you’ll never notice it.

This will likely tour and hopefully will not be attempted by a local theater because you’d need an eight-figure bankroll and a talent pool the size of a football stadium to do it right.

The whole thing is light, bubbling, intoxicating and blissfully insubstantial like cheap champagne.

Side note: Roundabout devotes one matinee in the run of every show to a free matinee for area students – both theater nerds and kids who have never seen a stage production. The press office apologized for accidentally giving us our seats in the back of the house on such a matinee.

No need. To watch 700-plus young people come happily unglued – the uninhibited cheering, rapturous applauding, screaming – was as encouraging a sign that theater will never die and that new generations are arriving to replace those patrons currently conferring these days with O’Neill and Oscar Hammerstein. And, again, some of these kids have never seen a show before. So frankly, giving all the satirical but extensive operetta numbers, you’d have expected that they would be bored. But they rewarded the show over and over – especially the dance numbers—with ovations that the cast only dreams of getting from a jaded adult Broadway audience. And not a single cellphone rang or illegal photo was snapped.