Report From New York: What Goes “Wrong” Is So Write… Rite…Right. Right? Right. 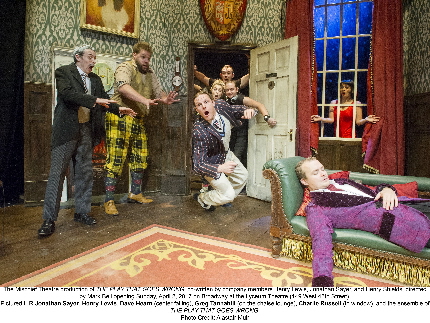 We’re back from our trip to New York to scout out productions you might want to see (or not), shows that might tour South Florida and scripts that might be worth reviving in our regional theaters.  Other shows—all nominated for Tony Awards on June 11 – that we have reviewed recently or will review in the next few weeks are War Paint, Bandstand, Indecent, Groundhog Day, Oslo, Six Degree of Separation and Natasha, Pierre and the Great Comet of 1812. Just search for “Report From New York.”

Granted, a farce documenting the doomed efforts of a hapless British theater troupe already has been brilliantly explored in Noises Off. But there is hilarity yet to mine as evidenced by The Play That Goes Wrong.

This British import at the Lyceum Theatre starts its madness before the “show” starts. The lampoon is evident immediately – from the “backstage crew” searching the lobby for a missing animal actor to the satirical playbill with the cover art misprinted. A stage hand spends the time before “curtain” trying in vain to fix an on-stage door that will not stay closed, which, of course, will not open once the play starts.

Similar to Michael Frayn’s classic Noises Off, this evening tracks an attempt to mount a fictional fusty Agatha Christie-like whodunit The Murder at Haversham Manor. But this provincial community theater group known as the Cornley University Drama Society is fifth-rate compared to Frayn’s second-rate professional troupe. We don’t see the rehearsals as in Noises Off; we watch the entire cursed production, in which nothing but nothing goes as the playwright planned for more than 15 seconds.

One key to this production’s success is that it appears to be “devised theater” by the real life Mischief Theatre, which won an Olivier Award when Wrong played in the West End. Over a protracted development period, the entire troupe has participated in the suggestion and insertion of hundreds upon hundreds of bits of business. That means Wrong is crammed with a non-stop parade of jokes, puns, spit takes, verbal and physical comedy – far, far more than in Noises Off and executed with a Swiss watch precision borne of performers who have worked together for years.

The entire encyclopedia of physical and verbal slapstick is on display: over-the-top slow burns and double takes; tumbling wall hangings that resist efforts to rehang them; doors slamming in people’s faces and knocking them unconscious—repeatedly; props disappearing, malfunctioning or breaking in use; missed cues and forgotten dialogue leading to an endless cycle of lines; a dead body that cannot stay still; malapropisms and mispronounced words. Audience participation is not just encouraged but relied upon for some jokes.

The pace is, in fact, relentless, and some observers might actually yearn for a little respite, or just a bit of breathing room to let the humor sink in. But most people will be laughing too hard to notice until the “interval.”

But nothing tamps down the pace, from a stagehand replacing a sidelined leading lady to the deranged sound/light operator searching for his lost Duran Duran CD to collapsing scenery, Wrong keeps rolling and rollicking.

All of the actors are inspired loonies under Mark Bell’s direction, but the most impressive is the indefatigable Dave Hearn as Max, the suspicious brother of the victim. Physically is blessed with an unusual beak of a nose and beady eyes, but his clueless Max breaks the fourth wall every minute, grinning idiotically every time the audience laughs at him rather than with him.

Even the Tony nominators were impressed: Set designer Nigel Hook was nominated for his ridiculous recreation of a country manor house as if it was designed by an untalented hack and which has individual pieces falling apart until… well, let’s not spoil it.

The play is so infectious that it’s in its third year playing in London with tours in the U.K., Ireland and Australia.

Doubtless, local companies will make this a staple much like Noises Off. But it would take a superbly talented cast and director to come even close to the density and precision of what mischief that the Mischief folks have wrought. 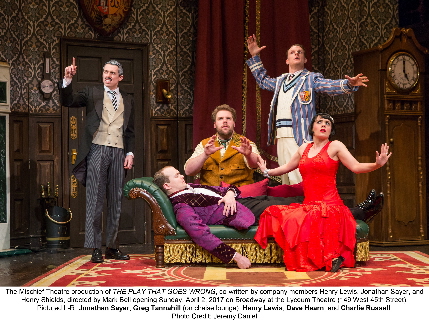 This entry was posted in Performances, Reviews and tagged Mischief Theatres, The Play That Goes Wrong. Bookmark the permalink.