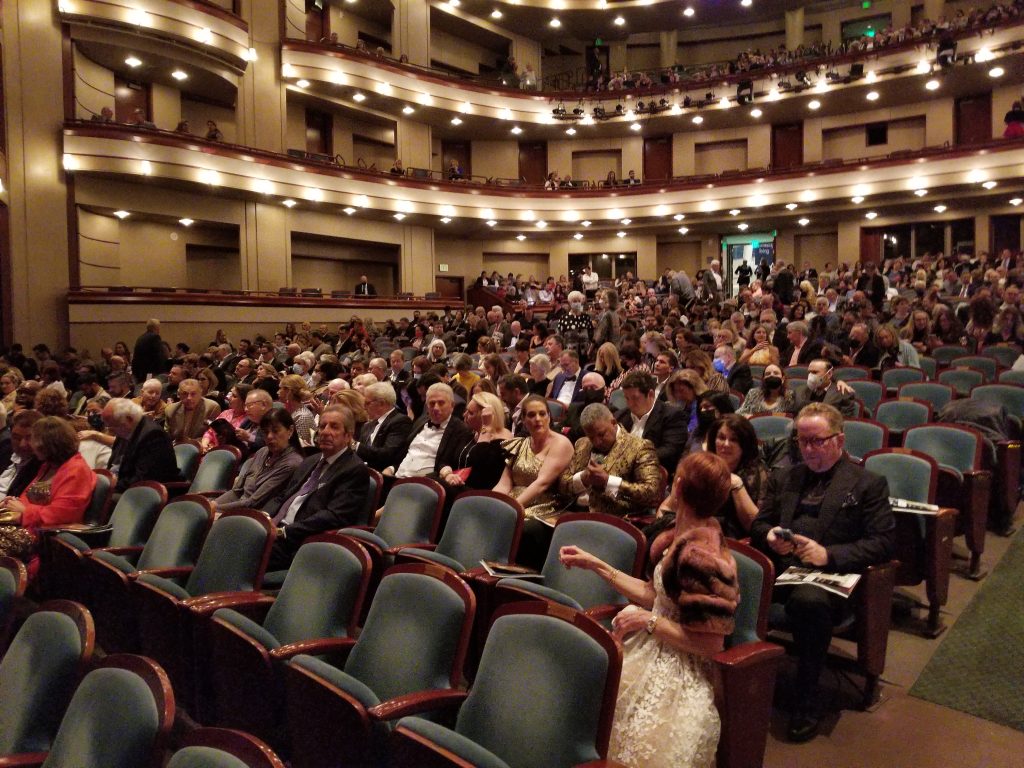 The panorama at Saturday’s opening of Florida Grand Opera’s Rigoletto had not been seen in a South Florida theater in two years.

Across the huge Ziff Ballet Opera House at the Arsht Center in Miami, a sea of uncovered faces. Hundreds upon hundreds. Upon hundreds.

But the patrons were not defying the venue’s strict Covid-19 policy in place since last year. The Arsht Center has become one of the first performing arts venues in the region to do away completely with requiring masks or proof of vaccination or recent virus test.

They won’t be alone for long. Theater managers across the region are on the cusp of relaxing restrictions, some only for certain productions, some dumping “vax proof” but not masks, and some cautiously gingerly peering ahead to determine what to do.

Covid-19 virtually shut down live in-person theater across the region in March 2020. Most companies ventured back last year by insisting on proof of vaccination or a recent negative virus test, but most obviously requiring wearing masks at least in auditoriums and usually inside lobbies.

No one is specifically discouraging mask-wearing in precisely drafted statements. The Arsht’s website recently was updated with “Masks Welcome and Encouraged: Beginning March 11, masks are no longer required at the Arsht Center. We welcome and encourage guests to continue to wear masks as an added precaution while in crowded areas.”

The Broward Center in Fort Lauderdale on March 2 issued this change for its auditoriums and the Parker Playhouse: “Masks are recommended but are not required for most shows.” The Kravis Center in West Palm Beach is still reviewing the issue, “but we anticipate a decision later this week,” wrote spokesman Gary Schweikhart.

Broward and the Arsht are still keeping the masks and vaccination requirements in place for the national tours that require them, for individual artists wanting to keep them like singer Diana Krall at the Broward Center, and resident theater companies using Equity actors like Slow Burn Theatre at the Broward Center and Zoetic Stage at the Arsht because the unions are still requiring some steps to hire its members.

Generally, the Actors Equity union does not require entire audiences be masked or vaccinated, said union spokeswoman Gabriela Geselowitz, although there may be special circumstances negotiated with specific productions.

Smaller venues are more in a state of flux. Actors’ Playhouse in Coral Gables just closed On Your Feet, which had full Covid measures. But the company plans to scrap them for its next children’s production late this month and is hopeful that Equity rules will relax in time for its next mainstage show Murder on the Orient Express recently pushed from April to May.

Island City Stage in Wilton Manors has adhered to the guidelines in its intimate venue, but its leaders have never avoided expressing their displeasure. With recent developments in virus numbers, the company plans to scrap restrictions for its production of Suddenly Last Summer this week.

Reflective of several companies reevaluating the situation are the founders of Palm Beach Dramaworks, which has trained ushers to aggressively insist patrons wear masks this season. They are weighing whether to forego vaccination checks (but not do without masks) when it opens The Belle of Amherst in May, following this month’s Intimate Apparel.

“I’m somewhere in the middle,” said Producing Artistic Director William Hayes. “I think there’s light at the end of the tunnel but I do think we need to take it in stages and not suddenly let up our guard like everything’s normal again. We’re unique because we’re a small theater, people are tightly packed in our space.”

Despite installing expensive precautions, he said, “I think there’s a little bit more risk in a theater of our size (of 200 seats).… I still rather err on the side of caution….  If the trend continues and the numbers stay down, we’ll re-evaluate it.”

A similar attitude exists at GableStage in Coral Gables where mask, vaccination and testing requirements will remain in place through its current run of The White Card ending March 27.

But “we will decide if policy changes are afoot after The White Card closes,” Producing Artistic Director Bari Newport wrote in an email. “When actors and crew agreed to perform on current contracts, certain COVID policies were an important part of their decision to perform. We have immune compromised people in casts, on crew and in our audience, so we will continue to adhere to our safety policies for the immediate future as we cannot risk anyone becoming sick. “

Whatever the situation today, policies could change tomorrow one way – or the other if another variant emerges,

Spokespeople for every company interviewed strongly suggested that patrons coming to a performance check their theaters’ websites to see if anything has changed recently – both a liberalized policy or alternatively reinstating strict guidelines if another variant explodes. Changing policies are often spelled out in emails sent to ticket holders and even printed on some tickets.

Since the beginning, the virus has created a yin and yang challenge for managers’ planning in the crucial arena of making people feel comfortable coming back to theater: Some patrons want to feel assured that they will be safe with as many precautions as possible. Some resent and resist adhering to policies to the point of taking off the mask when the lights go down and vowing not to return.

The wide variety of reactions of patrons have ranged from genial gratitude to downright hostility. At Island City Stage, notable for its intensely loyal subscriber base, Managing Director Martin Childers reported, “Some people simply refused to come. (Some) were like, oh, we were going to give you a donation, but (not unless you) change your mask policy. You’re damned if you do, damned if you don’t.”

At Actors Playhouse, Executive Producing Director Barbara Stein volunteered stories of resistant patrons who showed up dressed for a night out only to be told the bad news. Sometimes staff tried to talk them into complying with supplied masks; sometimes staffers just gave in. Sometimes the patrons put on the masks and took them off as soon as the lights went out.

One woman was so “mad and nasty” that she didn’t allow Stein to help her find an answer. Eventually, “we gave them a refund… but I think they were threatening to call lawyers….  She just shook her head at me and she said, ‘I don’t have to wear a mask. This is a free country.’ ”

Another possible sign of the venues’ antsiness from a public relations standpoint: The administrations of all three major presenting house venue, the Arsht, the Broward Center and the Kravis Center, all declined repeated requests for interviews to discuss the rationales for their policy, experiences with patrons and other details, relying instead on brief emailed “statements” and referrals to their websites.

But the virus hasn’t been some theoretical danger to local theaters. Some have quietly needed to put standbys and understudies on stage – and even then running out of bodies. For instance, in the wake of several cast or crew members testing positive for Covid, Miami New Drama cancelled its performances for A Wonderful World from about Dec. 21 through Dec. 29.

It’s a nationwide situation. As recently as this weekend, the hit musical Hadestown in New York City announced it was cancelling all of its March 12 performances having used up all of its standbys.

On the other side of the equation, an overall increase in vaccinations (especially among theaters’ older clientele) and decrease in hospitalizations reported by the Centers for Disease Control has provided happily anticipated encouragement to theater managers.

That  resulted oward that end, on Feb. 28, Miami-Dade County Mayor Daniella Levine Cava wrote, “Together, we learned so much in the last two years and it’s time to take that knowledge—rooted in science and data—and use it to be more proactive and adaptive against this evolving pandemic.”

While strongly supporting vaccines and booster shots, the mayor changed county policy for county buildings such as the Arsht to no longer require face masks, said Michael Spring, director of the county cultural affairs department. The only exceptions were airports, seaports and public transportation per federal guidelines

Early this month, New York City Mayor Eric Adams ended requirements that masks be worn in “entertainment venues” although he did not include Broadway theaters. Quoted in The New York Times, he contended the community “had beaten back the Omicron variant of the virus, largely by ensuring that millions of people were vaccinated, and New Yorkers and tourists could enjoy the city again.”

Los Angeles County lifted of nearly all of its indoor mask and vaccine-verification requirements, but still requiring them for “large indoor events.”

An informal discussion with other theater critics Monday revealed that several regional theaters across the country have dropped their mask and vaccination requirements if Equity rules were not involved.

Equity and other unions have been a major player because they will not allow their members to perform in regional productions unless specific measures were taken, not just as far actions taken by actors and crews.

Theaters responded by instituting a phalanx of precautions and measures costing significant price tags such as overhauling air handling systems and filters.

Until last weekend, the Arsht had developed a smoothly-running system for processing patrons at large-scale events including a line of tables outside the Ziff Ballet Opera House to inspect vaccination documents and wrist tag attendees.

On Saturday, it was all gone. But few bet this is the end.

“I think we’re still in that gray area where there are people that are still cautious about how to address this issue with audiences and others that are beginning to get more liberal in regard to their policy,” Spring said.

To keep current on the guidelines at the three presenting houses: