Home For The Holidays: Comedy In Making God Laugh Morphs Into Poignancy At Playhouse 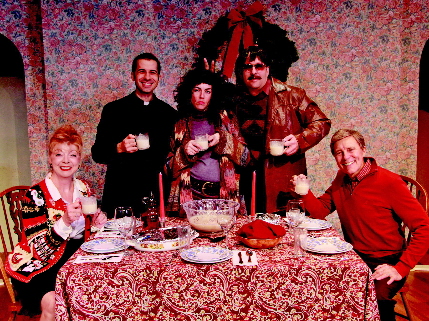 Most effective theater is the Theater of Recognition. A wise playwright enlists the life experiences of the audience to fill intentional gaps in the writer’s shorthand or even enhance what the writer has put before them.

Put Actors’ Playhouse production of Making God Laugh pretty much in the insightful column. Playwright Sean Grennan uses our recognition of the laughter and pain common to most familial relationships and uses it as a building block in his farcical comedy that transmutes into poignant drama.

Making God Laugh may not be Eugene O’Neill or even first-rate Neil Simon, but it is undeniably effective and affecting as well as quite funny – the kind of evening in which you nudge your seatmate knowingly at a shared recollection of some familiar family folly like the offhandedly judgmental mother.

A second thematic string is referenced in the title, a riff on the thousand-year-old maxim: “If you want to make God laugh, make plans,” or “Man plans, God laughs” or some other incarnation. The play follows a prototypical family through four holiday gatherings a decade apart, starting in 1980.  So much of the humor stems from the scores upon scores of times that characters either make predictions or embrace trends – all of which are, of course, off-base, transitory or downright laughable in 20-20 hindsight.

For instance, a brother tells his sister not to invest in that silly Google startup but put her money in the unshakeable Enron. Or the same brother keeps buying the latest hot car, starting with a Pacer, then a Yugo, then a Pinto. He tells his dad that he splurged for a cutting-edge 8-track player. Then he shows off the plastic cartridge and brags that you can fit 40 minutes of music on it! And gasoline prices – did you ever think you’d see it go up to $1.16 a gallon? These are genuinely funny the first 40 or so times the joke is used, although it wears thin by the second act such as when one son goes into survivalist mode over the approach of the Y2K disaster.

But Grennan has a metaphorical motive for the device beyond laughs. Even more vulnerable than consumer fads are the family’s planned dreams for their future. Here is where Grennan slowly slips in the more sober facet as naïve but hopeful plans go awry because change and compromise are part of real life. Grennan shows that the real survival skill is learning to adjust, adapt and accept the substitute pleasures and rewards when life inevitably takes a left turn.

In a similar vein, Grennan’s three-decade arc shows how family dynamics change as children grow older. If the first of the four scenes is a farce setting up the foibles of the family, he already is laying the fault lines that will fracture open in the second scene although the laughs keep coming. The play moves in the second act through a difficult reconciliation and then ends with a bittersweet last scene. The fact that you can see most of the developments coming at least a scene ahead of time doesn’t undercut their effectiveness.

The reason these less-than-subtle proceedings work so well here – the broad comedy and the touching drama – is they’re delivered by some of the best actors in the region led by artistic director David Arisco who sets the evolving tone in each successive scene.

The play opens at the annual Thanksgiving dinner in 1980 presided over by Bill, a gentle soul (Peter Haig) and Ruthie, a homemaker straight out of the Ladies Home Journal (Angie Radosh). Their middle-class living room looks like a late Eisenhower dream, complete with a painting of the Virgin Mary and a print of The Last Supper amid comfortable furniture and flowered wallpaper. It’s an extension of Ruthie’s steely mantra “I just want everything to be perfect.” Per the show title, that’s not to be, and we learn later that it never has been.

Enter their three children, all young adults recently launched into the real world: Richard (Gregg Weiner), who self-consciously wants to be called Rick rather than Ricky, is a shaggy haired former high school football star, now a bartender, embracing the silliest and most transient fads. Thomas (Michael Focas) is the genial and calm son studying to enter the priesthood to the joy of his mother. Maddie (Deborah L. Sherman), who is trying to become an actress, is currently into early Madonna outfits.

From the first, the family is a classic sit-com of abiding love, sibling rivalry and papered-over slights. Maddie gigs Richard’s new Pacer which he says is salmon-colored and she says is pink: “Is that your car? When did you start working for Mary Kay?” When Ruthie asks Maddie about her outfit, Maddie says, it’s a style. To which Ruthie responds, “Is homelessness a style?” Ruthie is a master of that blithely cutting criticism of Richard and Maddie while throwing Thomas’ imminent success in their face.

In successive scenes, things change – newer phones appear and newer cameras used to shoot the annual family photograph. But what really changes are the evaporating and morphing ambitions and hopes, as well as the ebb and flow of relationships.

Again, this wouldn’t work well in amateurs’ hands, especially since the cast and director must persuasively inhabit the steadily mutating tone and less-than-subtle material. But Arisco has the right quintet here capable of snappy retorts or tugging at the heart.

Sherman, who has been sorely missed while she took some time off, roars back into her role as the disaffected daughter. Her Maddie growls, grimaces, glowers, gloats and pouts at Richard’s jibes and her mother’s slights.  She is obviously the smartest person in the room. But even before it’s spelled out, we can sense that a childhood of damage has made her feel a bit of an outsider even in her own family. An indication of the challenge that Grennan puts in front of her are such soapy lines as “You love me, but you don’t like me.” On paper that line sounds like a telenova, but Sherman wrenches it out of her characters’ guts.

Sherman’s finest moment comes near the end. (A minor spoiler alert). Maddie’s family asks her throughout the play to perform a monologue for them, mostly out of perfunctory politeness, but she has always balks. Finally, long after her thespian efforts are limited to a drama club at the school where she teaches, Maddie accedes. Sherman delivers a stirring rendition of Shakespeare’s painfully appropriate Seven Ages of Man speech. What Sherman achieves beautifully, as Grennan must have wanted, is to show that if Maddie’s dream did not come true, she always had within her the potential for greatness in that field. Poignant, indeed.

Radosh, who has had an amazing run of performances over the past couple of years, has the best-written role but it still is a challenge. Radosh conquers it by totally inhabiting her character, never stooping for laughs. Both the humor and pathos of her character is that Ruthie doesn’t know she is being hurtful criticizing her children or funny, such as her oblivious persistence making a holiday dip that her family hates. While she never makes Ruthie a monster, the very blitheness in her criticisms makes them doubly painful.

Radosh also brings out the iron repression of Ruthie’s true feelings. Grennan has her say at one point that people have to sacrifice something to have the “important things:” husband, God, family. “Everything else is distraction, a poison you have to turn your back on.” In her reading, Radosh makes that line encompass a lifetime of sadness over a lost opportunity.

Haig has the least to work with in the script, but he’s a veteran actor who knows how to convincingly portray a husband thoroughly in love with his prickly wife. When Bill finally puts his foot down in one confrontation or explains how he has coped with the one permanent challenge in his marriage, Haig is so winning that some audiences applaud him.

Weiner has done comedy often, but people think of him more for his dramatic work at GableStage. So this serves as a solid reminder that his toolbox is deep and wide. Grennan has written Richard broadly, mostly as a self-involved, trend-obsessed alcoholic ne’er-do-well, saddling him with that silly Y2K bit. And yet, as Grennan wants, Weiner somehow communicates the heartache of the former high school hero who knows as time passes that he will never even qualify as a has-been.

Focas, who also has been working regularly at GableStage, is the even tempered peacemaker all the way through. But Thomas never seems too good to be true, just the sanest member of the family

One of the largest challenges is for the characters to age. While the physical changes are pretty blunt – silly wigs and grey shoe polish slathered on the hair – the actors succeed in the personality changes as they mature and face futures they did not envision.

A final nod for costumer Ellis Tillman who has been having a few terrific seasons here and at GableStage. He is tasked more than anyone with charting the changing decades and he has captured the evolving styles with note perfect outfits that are a witty commentary in themselves on transitory fashion. Especially hilarious are his choices for Richard’s eternal pursuit of voguish taste including a head bandana, faded Star Wars T-shirt and what may be camouflage parachute pants.